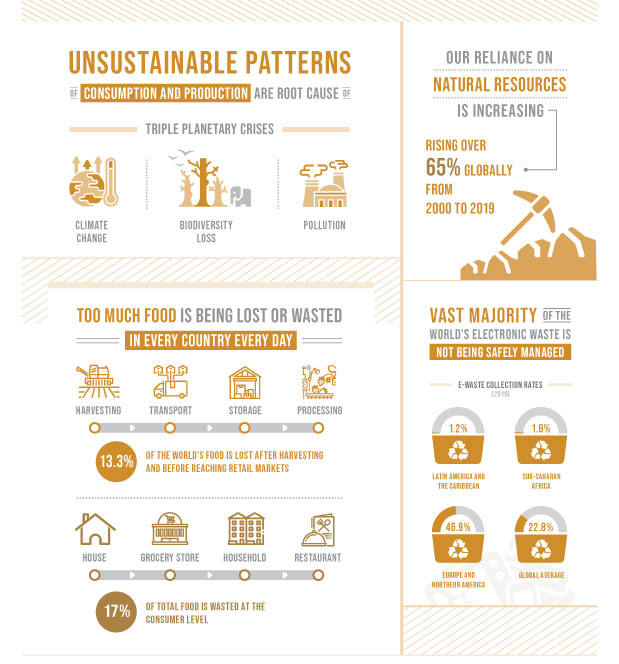 Unsustainable patterns of consumption and production are root causes of the triple planetary crises of climate change, biodiversity loss and pollution. These crises, and related environmental degradation, threaten human well-being and achievement of the Sustainable Development Goals. If we continue on the prevailing development pathway, the Earth's finite capacity will be unable to sustain the livelihoods of current and future generations. Transforming our relationship with nature is key to a sustainable future. As the world develops strategies for sustainable recovery from the pandemic, governments and all citizens should seize the opportunity to work together to improve resource efficiency, reduce waste and pollution, and shape a new circular economy.

Domestic material consumption (DMC) measures the total amount of materials directly used by an economy to meet the demands for goods and services from within and outside a country. From 2000 to 2019, total DMC rose by more than 65 per cent globally, amounting to 95.1 billion metric tons in 2019. That translates to 12.3 tons per person. Two regions accounted for about 70 per cent of global DMC: Eastern and South-Eastern Asia and Europe and Northern America. During this period, Eastern and South-Eastern Asia showed the steepest rise in DMC, from 31 per cent in 2000 to 43 per cent in 2019. The main drivers of this growth are increased population density, industrialization and the outsourcing of material-intensive production from developed to developing countries. Increased dependence on natural resources exacerbates the pressure on sensitive ecosystems and ultimately affects both human health and the economy. Reducing this pressure requires increased resource efficiency, circularity measures and overall efforts to de-materialize economic growth.

As the world faces rising food insecurity, too much food continues to be lost or wasted. In 2020, an estimated 13.3 per cent of the world's food was lost after harvesting and before reaching retail markets. These losses occur during on-farm activities, transport, storage, processing and wholesaling. This share has remained relatively constant since 2016, suggesting no changes in structural patterns of food loss. In addition, an estimated 17 per cent of total food available to consumers (931 million metric tons) is wasted at household, food service and retail levels, translating to 121 kilograms per person each year with about 60 per cent of this waste occurring in households. Food loss and waste are global problems; they happen in all countries, though food losses occur chiefly in developing countries while food waste occurs mostly in developed countries. Sub-Saharan Africa has the highest level of food insecurity, but also the highest rate of food loss.

Both food loss and food waste have substantial environmental, social and economic consequences. For example, food that ends up in landfills generates 8 to 10 per cent of global greenhouse gas emissions. Reducing food waste is one means through which countries can deliver on their Global Methane Pledge. When food is lost or wasted, so are opportunities for improving food security and decreasing the environmental footprint of food production and consumption.

Proportion of food loss (after harvesting and before reaching retail markets), 2020 (percentage)

When electrical and electronic equipment is discarded, it becomes part of a fast-growing waste stream that contains both valuable and hazardous materials. The rapid rise in this e-waste is driven by growing consumption, short product life cycles and minor repairs. In 2019, the amount of e-waste generated globally was 7.3 kilograms per capita, out of which only 1.7 kilograms was managed in an environmentally sound way (meaning that all hazardous substances are dismantled and adequately treated, and recyclable materials are reclaimed). E-waste collection rates are relatively high in high-income countries, but are much lower in low- and middle-income countries - only 1.6 per cent in sub-Saharan Africa and 1.2 per cent in Latin America and the Caribbean. In low- and middle-income countries, the necessary infrastructure has not yet been developed or is insufficient to manage the e-waste that is locally generated and illegally imported. Moreover, due to the lack of regulations in these countries, e-waste is managed mainly by the informal sector, usually in an unsafe way. Used refrigerants, for example, are emitted in the open air and valuable components are selectively dismantled or extracted by open burning and acid baths, polluting the environment and negatively affecting human health.

Renewable energy is taking off in developing countries overall, but the poorest, most disadvantaged countries are lagging behind

Subsidies that promote the production and use of coal, oil, gas and other fossil fuels cause a range of adverse environmental and health impacts – from air and water pollution to climate change. Such subsidies are among the most significant financial barriers hindering the world's transition to renewable energy sources. In 2020, governments spent $375 billion on subsidies and other support for fossil fuels, a decline from $526 billion in 2019. However, this drop was mainly due to low oil prices and reduced demand during the pandemic rather than structural reforms. In 2021, commodity and energy prices rebounded sharply, and we are likely to see a jump in both consumption and production subsidies for fossil fuels. Today, countries that were hesitant to seize the opportunity presented by low international fuel prices to reform subsidy schemes might be forced to maintain or increase subsidies to offset the increasing fuel prices faced by consumers across the world. Such strategies will have fiscal consequences, however. They will also reduce the resources needed to invest in greener recoveries and sustainable growth. The answer to high fossil fuel prices is a quicker and scaled-up transition to renewable energy sources.

Knowledge about sustainable development, global citizenship and peace enables individuals to take appropriate action and positively contribute to the well-being of their communities. Around 90 per cent of countries report that Education for Sustainable Development and Global Citizenship Education are at least partially mainstreamed in national education laws and policies, curricula, teacher education or student assessments in primary and secondary school. However, only 15 per cent of countries report high levels of integration in all four areas. Much lower rates of mainstreaming are reported in technical and vocational education (57 per cent) and in adult education (51 per cent). A recent global survey of primary and secondary teachers found that one in four teachers does not feel ready to teach themes related to these topics. More effort is needed to ensure that these issues are core components of national education systems.