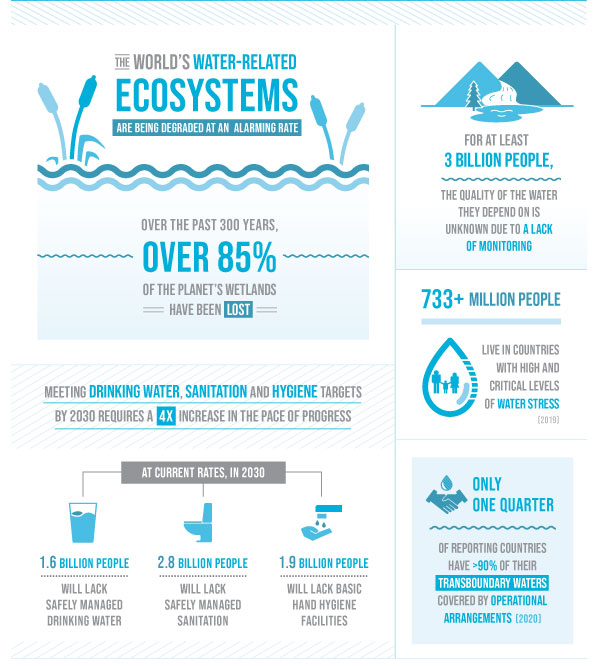 As the COVID-19 pandemic drags on, it becomes increasingly clear that safely managed drinking water, sanitation and hygiene services are vital to human health. But unless progress picks up speed - dramatically - billions of people will still lack these essential services in 2030. Water is fundamental to many other aspects of sustainable development and is under threat. Demand for water is rising due to rapid population growth, urbanization and increasing pressure from agriculture, industry and the energy sector. Decades of misuse, poor management and the over-extraction and contamination of freshwater and groundwater supplies have exacerbated water stress and deteriorated water-related ecosystems. This, in turn, affects human health, economic activities, and food and energy supplies. Urgent action is needed to shift the current trend. To ensure a sustainable and equitable distribution of water to meet all needs, the average global implementation rate of improved water resources management needs to double. Additional efforts are needed to increase investment in water and sanitation and to further cooperation among countries sharing transboundary waters.

Meeting drinking water, sanitation and hygiene targets by 2030 will require a fourfold increase in the pace of progress

From 2015 to 2020, the world population using safely managed sanitation services increased from 47 per cent to 54 per cent. If historical rates of progress continue, the world will reach 67 per cent coverage by 2030, leaving 2.8 billion people without access. Over the same period, the population practising open defecation decreased by a third, from 739 million people to 494 million. The world is on track to eliminate open defecation by 2030.

Frequent and proper hand hygiene is essential to containing COVID-19 and controlling other infectious diseases. Yet, over 1 in 4 people still lack access to handwashing facilities with soap and water at home. Coverage increased from 67 per cent to 71 per cent from 2015 to 2020.

Universal access to drinking water, sanitation and hygiene is critical to global health. To reach universal coverage by 2030, current rates of progress would need to increase fourfold. Achieving these targets would save 829,000 lives annually. This is the number of people who currently die each year from diseases directly attributable to unsafe water, inadequate sanitation and poor hygiene practices.

The world's wetlands are being lost at an alarming rate; it's time to protect and restore them on a massive scale

Wetlands are considered the most biologically diverse of all ecosystems and are breeding grounds for 40 per cent of the world's plant and animal species. Unsustainable use and inappropriate management of wetlands not only result in the loss of ecosystem services but can also pose direct risks, including disease. Moreover, the degradation of wetlands releases stored carbon, fuelling climate change. Over the past 300 years, over 85 per cent of the planet's wetlands have been lost, mainly through drainage and land conversion, with many remaining wetland areas degraded. Since 1970, 81 per cent of species dependent on inland wetlands have declined faster than those relying on other biomes, and an increasing number are facing extinction.

Other water-related ecosystems across the planet â€“ such as lakes, rivers and reservoirs â€“ are also changing rapidly. One in five river basins have experienced high (i.e., above natural) fluctuations in surface water over the past five years. Population growth, changes to land cover and land use, and climate change are key drivers of these changes. Urgent efforts are needed to protect them and to prevent further degradation of these precious biological habitats.

Early remediation of water pollution will require active monitoring, which is sorely lacking in the poorest countries

Improving water quality is essential to protecting human and ecosystem health. Assessments in 2020 of rivers, lakes and aquifers in 97 countries showed that 60 per cent of water was of good ambient quality. However, of the 76,000 water bodies assessed, only 1 per cent were in the poorest countries. For at least 3 billion people, the quality of the water they rely upon is unknown due to the lack of monitoring. Data are also lacking on groundwater, which often represents the largest share of freshwater in a country. Out of all reporting countries, only around 60 per cent included information about groundwater.

Agricultural and untreated wastewater pose two of the gravest threats to environmental water quality globally since they release excess nutrients into rivers, lakes and aquifers, damaging ecosystem function. Accelerated progress is needed to enhance farming management practices and improve wastewater treatment rates to protect freshwater quality, especially in regions with high population growth, such as Africa. With a well-developed monitoring system, water-quality issues could be identified at an early stage, allowing mitigation measures to be introduced before severe deterioration occurs.

Water stress occurs when the ratio of freshwater withdrawn to total renewable freshwater resources is above the 25 per cent threshold. High water stress can have devastating consequences for the environment. It can also curtail or even reverse economic and social development, increasing competition and potential conflict among users. Globally, water stress reached a level of 18.6 per cent in 2019. Although it remained at a safe level (below 25 per cent), this average masks substantial regional variations. Northern Africa and Western Asia had a critical level of water stress that year, at 84.1 per cent, an increase of 13 per cent since 2015. More than 733 million people - 10 per cent of the global population - live in countries with high and critical levels of water stress (above 75 per cent).

Transboundary rivers, lakes and aquifers are shared by 153 countries around the world. Ensuring that these waters are managed equitably, sustainably and peacefully, particularly in the context of climate change, requires countries to put in place operational arrangements for water cooperation. According to data collected from 129 countries, 32 countries reported that 90 per cent or more of their transboundary water was covered by operational arrangements in 2020, an increase from 22 countries in 2017. In Europe and Northern America, 24 out of 42 countries have such levels of coverage, compared to 5 out of 42 countries in sub-Saharan Africa and a total of three countries across the rest of the world. Accelerating progress will require that countries address data gaps (especially in relation to transboundary aquifers), scale up capacity development and financing, capitalize on global water conventions and the draft articles on the law of transboundary aquifers, and mobilize political will.