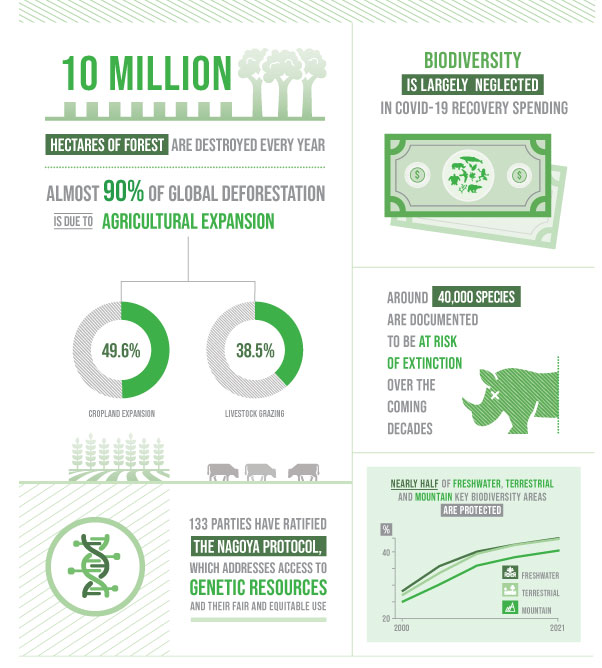 Healthy ecosystems and the biological diversity they support are a source of food, water, medicine, shelter and other material goods. They also provide ecosystem services – the cleaning of air and water, for example – which sustain life and increase resiliency in the face of mounting pressures. Nevertheless, human activities have profoundly altered most terrestrial ecosystems: around 40,000 species are documented to be at risk of extinction over the coming decades, 10 million hectares of forest (an area the size of Iceland) are being destroyed each year, and more than half of key biodiversity areas remain unprotected.
In an effort to prevent and halt the degradation of such ecosystems, many countries are sustainably managing their forests, protecting sites critical to biodiversity, and enacting national conservation legislation and policies. However, other opportunities are being lost. The emergence of COVID-19 was an opportunity to integrate biodiversity considerations into economic recovery measures and build a more viable future. But biodiversity has been largely neglected in recovery spending.

The world’s forest area continues to shrink, mainly due to agricultural expansion

The world’s forest area continues to decline, but at a slightly slower rate than in previous decades. The proportion of forests fell from 31.9 per cent of total land area in 2000 to 31.2 per cent in 2020, representing a net loss of almost 100 million hectares. Agricultural expansion is driving almost 90 per cent of global deforestation, including 49.6 per cent from expansion for cropland and 38.5 per cent for livestock grazing.

Changes in forest area vary widely from region to region. Asia, Europe and Northern America showed an overall increase in forest area from 2000 to 2020 due to afforestation, landscape restoration and the natural expansion of forests. In contrast, significant losses were observed in Latin America and sub-Saharan Africa, mostly due to the conversion of forests into agricultural land.

The felling of forests continues, despite major gains in several regions. Between 2010 and 2021, the area of forest land under certification schemes increased by 35 per cent. The proportion of forests under a long-term management plan increased from 54 per cent in 2010 to 58 per cent in 2020. More than 700 million hectares of forest (18 per cent) were in legally established protected areas in 2020.

While nearly all forests in Central Asia, Europe and Western Asia fall under a management plan, the managed proportion remains low in Latin America and the Caribbean, Oceania and sub-Saharan Africa.

The world continues to make progress on implementing frameworks for the sustainable use of genetic resources and associated traditional knowledge. The Nagoya Protocol to the Convention on Biological Diversity provides a transparent legal framework for the implementation of fair and equitable sharing of benefits arising from the utilization of genetic resources. As of February 2022, 132 countries and the European Union had ratified the Protocol, and 68 countries have devised at least one legislative, administrative or policy measure to ensure its implementation.

Also by that date, the number of contracting parties to the International Treaty on Plant Genetic Resources for Food and Agriculture had grown to 148 from 135 in 2015. Seventy-nine countries have submitted a national report on the implementation of the Treaty’s provisions, a sizeable increase from 12 countries in 2016. In addition, the number of Standard Material Transfer Agreements has increased, from 55,352 in 2015 to 81,556 in 2022, indicating that more users are benefiting from the Treaty’s Multilateral System for research, breeding and training.

The risk of species extinction is increasing at a rate unprecedented in human history. The Red List Index, which measures the overall extinction risk of species in selected taxonomic groups, reveals a deterioration of 9.2 per cent between 2000 and 2022. Wide variations are found among regions in both the overall prevalence of extinction risk and the rate of deterioration. Central and Southern Asia, Eastern and South-Eastern Asia, and small island developing States suffer from more severe risk and faster deterioration than the global average. The main drivers of these declines are the unsustainability of agriculture and the over-harvest of wild species. Human activities such as logging and farming are encroaching upon habitats, putting about 20 per cent of reptile species, for example, at risk. To conserve and sustainably use biodiversity, key actions are urgently needed, including reversing the net loss of habitat, transforming land management and transitioning to sustainable agriculture.

Nearly half of areas identified as key for global biodiversity are under protection, though progress lags in four regions

Given the wide variation in the distribution of biodiversity and the threats to it around the planet, it is important that protected areas be located strategically. Safeguarding key biodiversity areas (KBAs) through the establishment of protected areas or other effective area-based conservation measures is helping prevent the rapid loss of biodiversity. Globally, the mean percentage coverage of KBAs by protected areas increased from over one quarter in 2000 to nearly one half in 2021. Despite this encouraging trend, the growth of coverage has slowed in recent years. Moreover, coverage is uneven. Four regions – Northern Africa and Western Asia Central and Southern Asia, Eastern and South-Eastern Asia, and Oceania – still have mean coverage of less than 35 per cent across marine, terrestrial, freshwater and mountain KBAs.

National planning processes are increasingly reflecting the value of biodiversity; still, progress is too slow

Biodiversity directly or indirectly contributes to the attainment of most SDGs. The number of countries incorporating ecosystem and biodiversity values into national accounting and reporting systems is steadily trending upwards. The majority of countries have established national targets in this regard, in accordance with the Aichi Biodiversity Target 22 of the Strategic Plan for Biodiversity 2011–2020. By January 2022, 37 per cent of countries assessed are on track to achieve or exceed their national targets; 58 per cent have made progress towards their targets but at an insufficient rate; and 5 per cent reported that they are making no headway or moving away from their national targets. Despite important gains, Aichi Biodiversity Target 2 was not met by 2020. Building back better from COVID-19 is an opportunity to integrate biodiversity considerations into economic recovery measures to build a more sustainable future – while reducing the risk of future pandemics. However, this opportunity is not being seized. To date, biodiversity has been a largely neglected area in recovery spending.

Number of countries reporting different levels of progress towards national targets established in accordance with Aichi Biodiversity Target 2, by January 2022