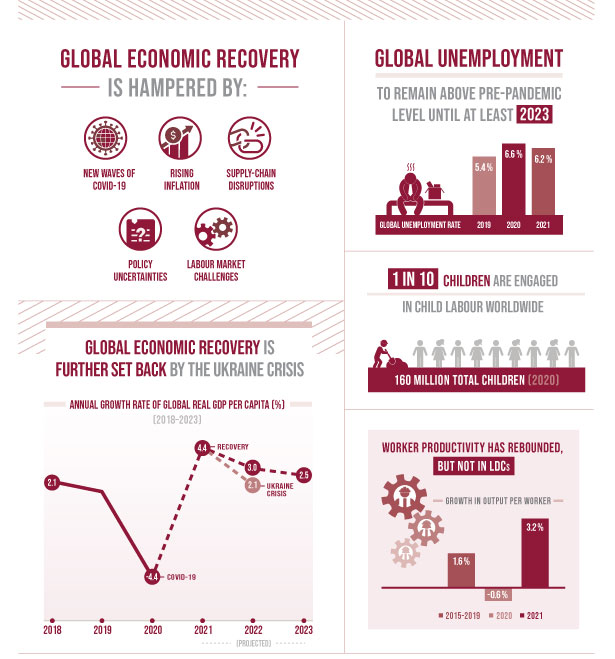 The COVID-19 pandemic precipitated the worst economic crisis in decades and reversed progress towards decent work for all. Although the global economy began to rebound in 2021, bringing some improvement in unemployment, recovery remains elusive and fragile. Recovery patterns also vary significantly across regions, countries, sectors and labour market groups. Developed economies are experiencing a more robust recovery, while least developed countries (LDCs) continue to struggle with weak economic growth and labour market fallout due to workplace closures. Many small firms, particularly those in low- and lower-middle-income countries, are especially disadvantaged, with limited capacity to remain viable. Labour market groups most affected by the crisis - women, youth and persons with disabilities - are the last to recover. By the end of 2021, global economic recovery had been hampered by new waves of COVID-19 infections, rising inflationary pressures, major supply-chain disruptions, policy uncertainties and persistent labour market challenges. The conflict in Ukraine is expected to seriously set back global economic growth in 2022.

Various shocks, including the war in Ukraine, continue to hinder robust economic recovery

The global economy is slowly improving, although recovery remains fragile and uneven. Globally, real gross domestic product (GDP) per capita increased by 1.4 per cent in 2019, then fell sharply in 2020, by 4.4 per cent, rebounding in 2021 at an estimated growth rate of 4.4 per cent. Before the Ukraine crisis, global real GDP per capita was projected to increase by 3.0 per cent in 2022, and 2.5 per cent in 2023. The war in that country is now likely to cut growth to 2.1 per cent in 2022.

The pandemic has resulted in volatile shifts in labour productivity, affecting small firms and the poorest countries the most

The impact of COVID-19 has resulted in unprecedented and volatile shifts in global labour productivity. In 2020, sharp declines were seen in both output and employment, and global output per worker dropped by 0.6 per cent - the first decline since 2009. However, since working hours plunged by 8.9 per cent, productivity measured on a per-hour basis surged by 4.9 per cent. Lower-productivity firms and sectors and lower-paid workers were disproportionately affected by the pandemic, while high-productivity enterprises and high earners saw far less damage. Many small firms are disadvantaged, with limited capacity to remain viable over an extended period. In 2021, global output per worker rebounded sharply, rising by 3.2 per cent; however, productivity in LDCs declined by 1.6 per cent. The average worker in a high-income country produced 13.6 times more output than the average worker in a low-income country in 2021.

The global unemployment rate is projected to remain above its 2019 level of 5.4 per cent, at least until 2023. In 2021, unemployment declined slightly to 6.2 per cent, which still translates into 28 million more unemployed persons in 2021 than in 2019. Furthermore, the level of unemployment underestimates the full employment impact of the COVID-19 crisis, since many who left the labour force have not returned. It also does not reflect the reduction in working hours for those who remained employed. In 2021, 4.3 per cent of global working hours were lost relative to the fourth quarter of 2019 - equivalent to a deficit of 125 million full-time jobs (based on a 48-hour work week). Labour market recovery has been inadequate and unequal. In 2021, the unemployment rate improved the most in high-income countries, but worsened in LDCs, landlocked developing countries (LLDCs) and small island developing States (SIDS). The groups that were disproportionately impacted since the onset of the pandemic – women, youth and persons with disabilities – are having the hardest time recovering.

In 2019, 2 billion people worldwide (60 per cent of global employment) worked in the informal sector. Although these jobs are characterized by low quality and lack of social protection, they have traditionally been a source of income for workers displaced from the formal sector. This was not the case in the early months of the pandemic due to COVID-19 containment measures and mobility restrictions. Rather than becoming unemployed or shifting to informal jobs, as in previous crises, laid-off employees and self-employed workers left the labour force. Emerging evidence from 29 countries shows that informal employment was disproportionately affected by job losses in most of these countries in 2020. In Latin America and the Caribbean, informal workers were twice as likely to lose their jobs than their formal counterparts. As economic activity gradually resumed, informal employment, especially self-employment, has strongly rebounded in some regions, and many informal workers have returned from inactivity. For example, informal jobs accounted for over 70 per cent of net job creation in many Latin American countries since mid-2020.

Worldwide, 160 million children (63 million girls and 97 million boys) were engaged in child labour at the beginning of 2020. This is an increase of 8.4 million children since 2016, translating to almost 1 out of 10 children engaged in child labour worldwide. Nearly half of them are involved in hazardous work that directly jeopardizes their health, safety or morals. Additional economic shocks and school closures caused by COVID-19 mean that children already in child labour may be working longer hours or under worsening conditions; many more may be forced into the worst forms of child labour due to job and income losses among vulnerable families. The latest evidence warns that, globally, 9 million additional children are at risk of being pushed into child labour by the end of 2022, compared to 2020, as a result of rising poverty driven by the pandemic.

The proportion of the world's youth not engaged in either education, employment or training (NEET) increased from 21.8 per cent in 2015-2019 to 23.3 per cent in 2020, due to the pandemic. This represents an increase of almost 20 million women and men aged 15 to 24. Although youth represented only 13 per cent of total employment before the crisis, they made up 34.2 per cent of the 2020 decline in employment. Meanwhile, both technical and vocational education and on-the-job training suffered massive disruptions, forcing many young people to quit their studies. Globally, young women are much more likely than young men to find themselves unemployed and without education or some form of training programme to fall back on. In 2020, the NEET rate was 31.5 per cent for young women, compared to 15.7 per cent for young men. The development and implementation of national youth employment strategies is increasing across most regions. More than half of the 81 reporting countries in 2021 have operationalized such strategies, while slightly less than one third have developed one, but have not provided conclusive evidence on implementation.

Proportion of youth not in education, employment or training, by sex, 2020 (percentage)