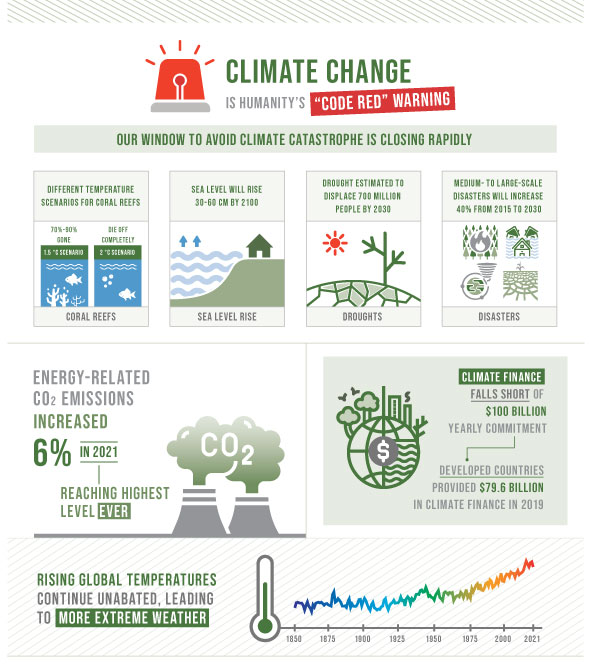 The world is on the brink of a climate catastrophe, and the window to avert it is closing rapidly. Increased heatwaves, droughts and floods caused by climate change are already affecting billions of people around the world and causing potentially irreversible changes in global ecosystems. To limit warming to 1.5° Celsius above pre-industrial levels, as set out in the Paris Agreement, global greenhouse gas emissions will need to peak before 2025. Then they must decline by 43 per cent by 2030, falling to net zero by 2050, according to the Intergovernmental Panel on Climate Change (IPCC), the United Nations body responsible for assessing the science related to climate change.
In response, countries are articulating climate action plans to cut emissions and adapt to climate impacts through nationally determined contributions. However, current national commitments are not sufficient to meet the 1.5 °C target. Under these commitments, greenhouse gas emissions are projected to increase by almost 14 per cent over the next decade. Immediate and deep reductions in emissions are needed across all sectors to move from a tipping point headed to climate calamity to a turning point for a sustainable future.

In 2020, concentrations of global greenhouse gases reached new highs, and real-time data point to continued increases. As these concentrations rise, so does the Earth’s temperature. In 2021, the global mean temperature was about 1.11 ± 0.13 °C above the pre-industrial level (from 1850 to 1900), making it one of the seven warmest years on record (2015 to 2021).

While variations in global temperatures from year on year are to be expected, the long-term trend is a warming climate. With rising temperatures, the world is experiencing more and more extreme weather events. This translates into melting ice caps and glaciers, intense heat and rainfall as well as sea-level rise and other potentially cataclysmic events, with adverse social and economic consequences. Such extremes could be seen on every continent in 2021: record-shattering temperatures in Canada, deadly flooding in Europe and Asia, and drought in parts of Africa and South America. The global annual mean temperature is projected to rise beyond 1.5 °C above pre-industrial levels in at least one of the next five years, edging precipitously closer to the lower target of the Paris Agreement.

In 2020, social and economic disruptions caused by COVID-19 lowered energy demand around the world. As a result, global carbon dioxide (CO2) emissions declined by 5.2 per cent in 2020 – the equivalent of almost 2 billion metric tons, the largest decline ever and almost five times greater than the 2009 drop following the global financial crisis. But it was only a temporary reprieve. With the phasing out of COVID-related restrictions, demand for coal, oil and gas increased. Consequently, energy-related CO2 emissions for 2021 rose by 6 per cent, reaching their highest level ever and completely wiping out the pandemic-related reduction seen in 2020.

While the $100 billion annual commitment is considered the bedrock of international climate finance, it is far below estimates put forth by the IPCC. The IPCC has estimated that $1.6 trillion to $3.8 trillion will be needed each year through 2050 for the world to transition to a low-carbon future and avoid warming exceeding 1.5 °C.

Human activity has irrefutably caused warming of the climate, at a rate unprecedented in the last 2,000 years, according to the IPCC. Its Sixth Assessment Report signals an urgent “code red” warning for humanity and outlines what the world can expect if global temperatures rise 1.5 °C or higher.

Every region across the globe is already experiencing weather and climate extremes. As the planet warms, scientists anticipate increases in the frequency and intensity of heatwaves, flooding, precipitation, droughts and cyclones. If current trends continue, the UN Office for Disaster Risk Reduction project that medium- to large-scale disaster events could reach 560 a year – an average of 1.5 a day – by 2030, a 40 per cent increase from 2015. The IPCC projects that about one third of global land areas will suffer at least moderate drought by 2100. With every additional increment of global warming, the projected changes in extremes will become larger. For instance, children under age 10 today are expected to experience a nearly fourfold increase in extreme weather events by 2100 under a 1.5 °C scenario and a fivefold increase under a 3 °C scenario.

Sea levels have already risen faster than in any preceding century. Projections show that sea level could rise 30 to 60 centimetres by 2100, even if greenhouse gas emissions are sharply reduced and global warming is limited to well below 2 °C. A rising sea level would lead to more frequent and severe coastal flooding and erosion. Ocean warming will also continue with increasingly intense and frequent marine heatwaves, ocean acidification and reduced oxygen. About 70 to 90 per cent of warm-water coral reefs will disappear even if the 1.5 °C threshold is reached; they would die off completely at the 2 °C level. These impacts are expected to occur at least throughout the rest of this century, threatening marine ecosystems and the more than 3 billion people who rely on the ocean for their livelihoods.

Even before the full fury of climate change has been unleashed, biodiversity loss is accelerating. Further losses in terrestrial, ocean and coastal systems are expected, with varying severity depending

on the temperature threshold reached. For instance, endemic species in biodiversity hotspots face a very high extinction risk, which will double if the global average mean temperature rises 1.5 °C to 2 °C, but will increase tenfold at 1.5 °C to 3 °C. Declining ecosystems and biodiversity loss will affect nature-based services, threatening human health and our very survival. These conditions also increase opportunities for the emergence of new zoonotic diseases, such as COVID-19, and possible future pandemics.

The droughts, floods and heatwaves brought on by climate change are putting added pressure on food production in many regions of the world. Parts of Africa and Central and South America are already experiencing increased, sometimes acute, food insecurity and malnutrition due to floods and droughts. Other projected impacts include devitalized soils, increased pest infestations and disease as well as weakened ecosystem services, such as pollination.

Climate change is affecting everyone, but the most vulnerable are hardest hit. The IPCC report estimates that 3.3 billion to 3.6 billion people live in contexts that are highly vulnerable to climate change. Hotspots of high human vulnerability are concentrated in small island developing States, the Arctic, Southern Asia, Central and South America, and much of sub-Saharan Africa. Poverty, limited access to basic services, conflict and weak governance limit adaptability to climate change, resulting in humanitarian crises that could displace millions from their homes. By 2030, an estimated 700 million people will be at risk of displacement by drought alone.

According to the latest IPCC report, “The scientific evidence is unequivocal: climate change is a threat to human well-being and the health of the planet. Any further delay in concerted global action will miss a brief and rapidly closing window to secure a livable future.” The report calls for urgent climate action now.