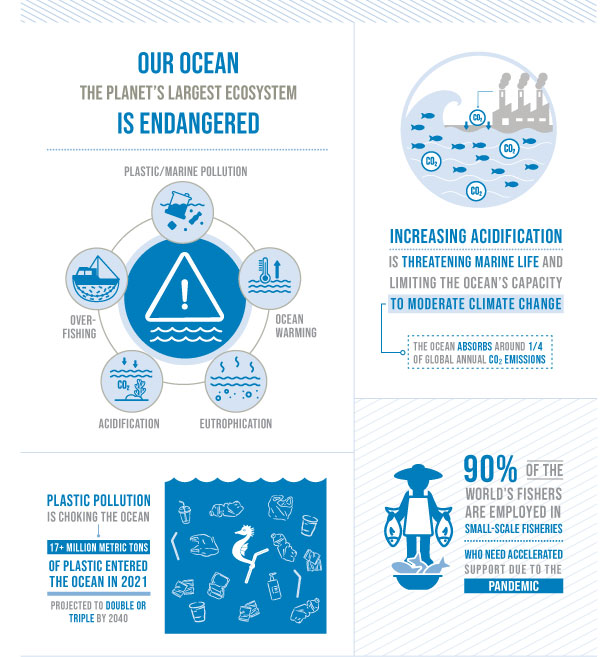 Human activity is endangering the planet's largest ecosystem – its oceans and seas – and affecting the livelihoods of billions of people. Continuing ocean acidification and rising ocean temperatures are threatening marine species and negatively affecting marine ecosystem services. Between 2009 and 2018, for example, the world lost about 14 per cent of coral reefs, often called the "rainforests of the sea" because of the extraordinary biodiversity they support. The oceans are also under increasing stress from multiple sources of pollution, which is harmful to marine life and eventually makes its way into the food chain. The rapidly growing consumption of fish (an increase of 122 per cent between 1990 and 2018), along with inadequate public policies for managing the sector, have led to depleting fish stocks. Combating the decline in ocean health requires intensified protection efforts and the adoption of solutions for a sustainable blue economy. This includes a "source-to-sea" approach that directly addresses the links between land, water, delta, estuary, coast, nearshore and ocean ecosystems in support of holistic natural resources management and economic development.

The ocean absorbs around one quarter of the world's annual carbon dioxide (CO2) emissions, thereby mitigating climate change and alleviating its impacts. This critical service, however, comes at a price: it is altering the carbonate system and increasing the acidity of the ocean. Ocean acidification threatens organisms and ecosystem services, endangers fisheries and aquaculture, and affects coastal protection by weakening coral reefs. Further increases in acidification are expected to accelerate over the coming decades. As acidification worsens, the ocean's capacity to absorb CO2 from the atmosphere will diminish, limiting its role in moderating climate change.

Over the last two years, the number of observation stations reporting on ocean acidification has almost doubled, from 178 in 2021 to 308 in 2022. Gaps in reporting and data remain. Observation sites in the open ocean have indicated a continuous decline in pH over the past 20 to 30 years. Coastal observations, on the other hand, present a more varied picture due to multiple stressors.

The proliferation of plastic, nutrient run-off and other forms of waste is killing marine life

The main sources of marine pollution are land-based, leading to a seemingly unstoppable flow of litter, waste and run-off into the ocean. In 2021, a study estimated that more than 17 million metric tons of plastic entered the world's ocean, making up the bulk (85 per cent) of marine litter. The volume of plastic pollution entering the ocean each year is expected to double or triple by 2040, threatening all marine life.

For coastal areas, eutrophication caused by nutrient pollution shows an increasing trend from 2016 to the present. This has resulted in a growing number of "dead zones" worldwide – from 400 in 2008 to around 700 in 2019. While COVID-19 may have reduced coastal pollution in some areas due to declining tourism and other activity, the pandemic does not appear to have eased coastal eutrophication globally.

Vast areas of the ocean are under protection, but more intensive efforts are still needed

Marine protected areas (MPAs) and other effective, area-based measures to conserve biodiversity – including marine sanctuaries, parks and reserves – have seen substantial growth over the last decade. The global coverage of MPAs stood at 8 per cent of global coastal waters and oceans in 2021. Recent designations of MPAs will raise this share, edging closer to the 10 per cent called for in the SDG and Aichi Biodiversity target. For example, a high-seas MPA that is vitally important for seabirds was recently designated in the North Atlantic, covering almost 600,000 square kilometres.

It is important that protected areas are strategically located – in sites most critical to the conservation of nature, such as key biodiversity areas (KBAs). That said, more than half (55 per cent) of marine KBAs, on average, are still not safeguarded.

Global fish stocks are still under threat, although the route to sustainability is clear and navigable

Global fish stocks are under increasing threat from overfishing and from illegal, unreported and unregulated fishing. More than a third (35.4 per cent) of global stocks were overfished in 2019, up from 34.2 per cent in 2017 and 10 per cent in 1974. However, the rate of decline has recently slowed. The Southeast Pacific now has the highest percentage of fish stocks at biologically unsustainable levels at 66.7 per cent, followed by the Mediterranean Sea and the Black Sea (63.3 per cent) and the Northwest Pacific (45 per cent). In contrast, the Eastern Central Pacific, Southwest Pacific, Northeast Pacific and Western Central Pacific had the lowest proportion (13 to 21 per cent) of stocks at unsustainable levels. Improved regulations, together with effective monitoring and surveillance, have been successful in reverting overfished stocks to biologically sustainable levels. However, the adoption of such measures has generally been slow, particularly in many developing countries, based on limited preliminary data collected in 2020.

Proportion of fish stocks at biologically unsustainable levels, by major fishing areas as defined by the FAO, 2017 (percentage)

Sustainable fisheries play an important role in local economies and in food security. They accounted for about 0.10 per cent of global GDP in 2019, a share that has not changed significantly since 2011. In the small island developing States in Oceania and LDCs, this proportion rises to 1.5 per cent and 0.90 per cent of GDP, respectively, reflecting a greater dependence of the worldâ€™s poor on fishing. While some regions have seen the contribution of fisheries to GDP rise, other regions are facing human-induced external pressures on wild stocks. For instance, the declining sustainability of several stocks in the Pacific Ocean has led to a worsening trend overall for Eastern and South-Eastern Asia, where sustainable fisheries fell from 1.06 per cent of GDP in 2011 to 0.80 per cent in 2019. The sustainable management of fish stocks remains critical to ensuring that fisheries continue to generate economic growth and support equitable development into the future.

Sustainable fisheries as a proportion of GDP, 2011-2019 (percentage)

Accelerated action is needed to support small-scale fishers, many of whose livelihoods collapsed under the pandemic

Almost half a billion people depend at least partially on small-scale fisheries, which account for 90 per cent of employment in fisheries worldwide. Almost all small-scale fishers (97 per cent) live in developing countries and many face high levels of poverty and lack broader social and economic development opportunities. Since 2015, efforts to provide small-scale fishers with access to marine resources and markets have expanded in most regions. The average global composite score – measuring enabling frameworks, concrete actions of support and participation in decision-making by small-scale fishers - rose to an average implementation level of 5 out of 5 in 2022, improving from 3 out of 5 in 2018. Current challenges include improving reporting rates and accelerating progress in light of the disproportionate impacts of COVID-19 on small-scale fishing communities. In many locales, fishers were unable to catch, process or sell fish for long periods due to pandemic-related restrictions and collapsing markets.

In the village of Menarbu, in Indonesia, people are entirely dependent on the sea for their livelihoods since they are unable to grow vegetables for sale outside of their community. Yohanis Ayamisebahe, a local fisher, has a boat equipped with an outboard motor on which he transports his fishing lines, snorkel and kalawai (spear). In 2018, after noticing that conditions in the sea and fish stocks were deteriorating, his village introduced an indigenous community-based coastal resource management system called sasi. Since it was established, Mr. Ayamisebahe says that fish stocks are thriving and incomes rising. This traditional system, which dates back generations, is premised on the balance between people and their environment. It seeks to protect the coastal marine ecosystem through a prescribed set of rules, including when different species of fish can be harvested. The challenge for the community now lies in finding nearby outlets for their products, since the market is very far and gasoline is expensive.