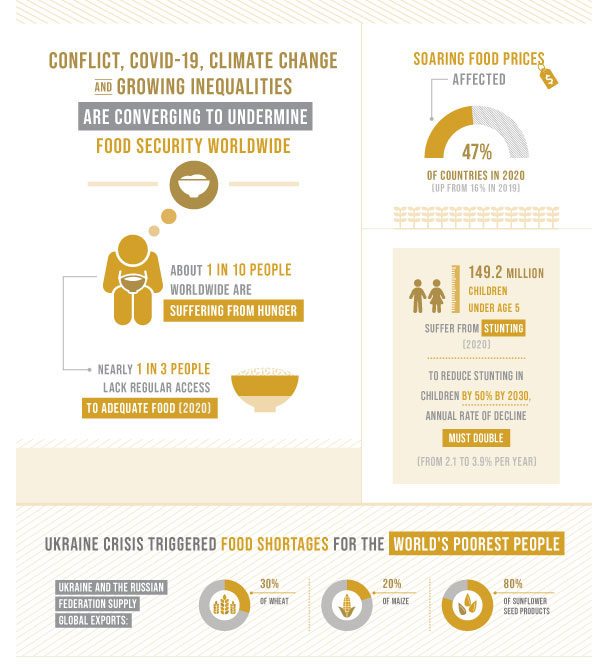 The world is on the verge of a global food crisis, with a rising number of people experiencing hunger and food insecurity even before the COVID-19 pandemic. Global food supply systems have been partially undermined by a cascading combination of growing conflicts, climate-related shocks and widening inequalities. As a result, as many as 828 million people may have suffered from hunger in 2021. The outbreak of war in Ukraine poses an additional threat to food insecurity, with the potential to provoke a surge in levels of hunger and malnutrition, especially among the poorest and most vulnerable. With this global crisis looming, it is more urgent than ever to address its root causes. The international community must act now to avert a crippling food emergency and the social, economic and political upheaval that could follow.

Climate variability and extremes, conflict, economic shocks and growing inequalities are keeping the world off track in achieving zero hunger by 2030. Since 2014, the number of people going hungry and suffering from food insecurity has been on the rise. The COVID-19 pandemic exacerbated an already deteriorating situation, with about 150 million more people facing hunger in 2021 than in 2019. In other words, an estimated 1 in 10 people worldwide are suffering from hunger. In addition, nearly 1 in 3 (a staggering 2.3 billion people) were moderately or severely food insecure in 2021, meaning they lacked regular access to adequate food. This represents an increase of almost 350 million people since the beginning of the pandemic. The most worrisome increases were seen in sub-Saharan Africa, followed by Central and Southern Asia, and Latin America and the Caribbean.

The unfolding crisis in Ukraine is yet another threat to food security. Ukraine and the Russian Federation are large producers and exporters of key food commodities, fertilizer, minerals and energy. Together they are considered the world’s breadbasket, supplying 30 per cent and 20 per cent of global wheat and maize exports, respectively, as well as 80 per cent of global exports of sunflower seed products. At least 50 countries import 30 per cent or more of their wheat from these two countries, with many African and LDCs importing more than 50 per cent. Ukraine and the Russian Federation are also leading exporters of fertilizers.

The conflict has caused a steep and sudden reduction in exports of grain, sunflower seeds and fertilizers. As a result, import-dependent countries are vulnerable to rising food costs and supply chain disruptions. Joint, coordinated activities and policy solutions are urgently needed to avert food shortages for the world’s poorest people and to reduce the impact of the conflict, as well as lingering consequences of the pandemic, on global food insecurity.

Small-scale farmers are the backbone of agriculture. Yet despite their importance in combating hunger, small-scale food producers are often among the most vulnerable groups in rural areas and within the agro-food system.

In low- and middle-income countries, the labour productivity of small farmers is less than $15 a day (constant 2011 purchasing power parity (PPP)), according to the latest available figures for 42 countries. The income of these small-scale producers continues to lag behind those of their larger-scale counterparts, with more pronounced differences in higher-income countries. In most countries with available data, the average annual income from agriculture of small-scale farmers is under $2,000 (constant 2011 PPP). This is less than half that of large-scale producers, in three quarters of countries for which data are available. Small-scale farmers who are women are further disadvantaged. Although the productivity of food production units headed by men and women is similar, the average annual income of units headed by women is between 50 per cent and 70 per cent that of men, in half the countries with available data.

Good nutrition sets children on a path to survive and thrive. The full impact of the pandemic on child nutrition may take years to manifest. However, a likely scenario is that COVID-19, together with soaring food prices, are exacerbating all forms of malnutrition due to a loss of household income, the lack of available and affordable nutritious food, reduced physical activity and disruptions in essential nutrition services.

In 2020, the latest year for which data are available, 22.0 per cent of children under age 5 worldwide (149.2 million) suffered from stunting (low height for age).1 This is a decline from 24.4 per cent in 2015. Subsequent years have seen continued constraints in accessing nutritious food and essential nutrition services due to the pandemic. To achieve the target of a 50 per cent reduction in the number of stunted children by 2030, the annual rate of decline must double (to 3.9 per cent per year) from its current annual reduction rate of 2.1 per cent per year.

Childhood wasting and overweight are both forms of malnutrition and can coexist in a population. In 2020, wasting (low weight for height) and overweight were found in 6.7 per cent of children under 5 (45.4 million) and 5.7 per cent of children under 5 (38.9 million), respectively. Wasting is a condition that can be brought on rapidly as a result of conflict, pandemics and climate events. Related shocks in food, fuel and fertilizer prices stemming from the war in Ukraine could tip the balance even further, destroying access to healthy diets. Childhood overweight may also be on the rise in some countries where unhealthy food replaced fresh, nutritious food, and movement restrictions curtailed opportunities for physical activity for long periods of time.

Such shocks, which have been occurring since 2020, will reverse progress made to date without additional interventions. An intensification of efforts is urgently required to reduce malnutrition and address the growing threats to nutrition security.

Proportion of children under age 5 who are affected by stunting and wasting, 20201 (percentage)


1 Estimates for 2020 do not account for the full impact of COVID-19 since the collection of household survey data on child height and weight were limited in 2020 due to pandemic-related physical distancing measures.

The share of countries affected by high food prices, which had been relatively stable since 2016, has risen sharply, climbing from 16 per cent in 2019 to 47 per cent in 2020. This shift mainly reflects trends in international markets. International prices of food items soared in the second half of 2020, more than offsetting declines in the first five months of the year. The price rises were partly due to an increase in international demand for cereals, vegetable oils, sugar and dairy products as restrictive COVID-19-related measures eased. In domestic markets, increasing freight and agricultural input costs, as well as logistical bottlenecks and market uncertainties, put increased pressure on food prices.

Prior to the Ukraine crisis, international food prices were already high, owing to market conditions, high energy and fertilizer prices, and other factors. In March 2022, global food prices were almost 30 per cent higher than at the same time last year, reaching an all-time high, though prices eased somewhat in the subsequent two months. Soaring food prices threaten to exacerbate global food insecurity.

Proportion of countries affected by high or moderately high food prices, 2019 and 2020 (percentage)