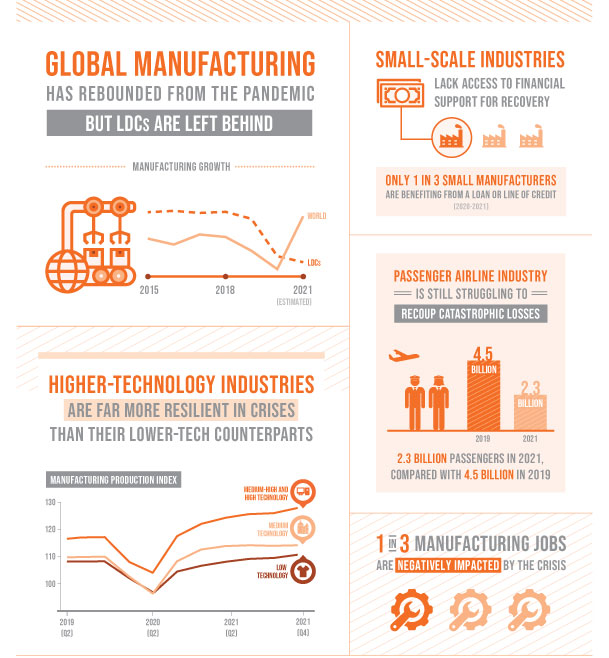 The COVID-19 pandemic has demonstrated the importance of industrialization, techological innovation and resilient infrastructure in building back better and achieving the Sustainable Development Goals. Economies with a diversified industrial sector and strong infrastructure (e.g., transport, Internet connectivity and utility services) sustained less damage and are experiencing faster recovery. In 2021, global manufacturing rebounded from the pandemic, although the recovery remains incomplete and uneven. In LDCs, recovery has been sluggish and remains uncertain; almost one in three manufacturing jobs was negatively impacted by the crisis. Women, youth and low- and middle-skilled workers suffered the most losses. Overall, higher-technology industries performed better and recovered faster, providing a strong example of how important technological innovation is to achieving Goal 9.

After dropping 1.3 per cent in 2020, global manufacturing production grew by 7.2 per cent in 2021, surpassing its pre-pandemic level. However, recovery remains uneven among countries. High-income countries benefited from massive policy support to firms and households and the rapid roll-out of effective vaccines. In contrast, recovery in LDCs has been sluggish, due to subdued and volatile global demand, global trade disruption and tighter domestic economic policies.

The global share of manufacturing value added (MVA) in total GDP increased from 16.2 per cent in 2015 to 16.9 per cent in 2021. Eastern and South-Eastern Asia expanded its share from 25.5 to 26.1 per cent over the same period, due to strong global demand for manufacturing and exports in the region. However, the share in LDCs was only 12.5 per cent in 2021. The same disparities are reflected in MVA per capita. While Europe and Northern America reached an all-time high of $5,000 in 2021, MVA per capita in LDCs decreased to $135 – comparable to 2018.

Jobs in manufacturing have not regained ground lost during the pandemic

As a result of prolonged lockdowns and travel bans, nearly one in three jobs in manufacturing supply chains worldwide have likely been terminated, seen a reduction in working hours or pay, or been the target of other cutbacks. Globally, the share of manufacturing jobs in total employment declined from 13.7 per cent in 2019 to 13.1 per cent in 2020. The impact has been particularly pronounced in middle-income countries, which have long leveraged participation in production chains as a source of employment and growth. The decline in manufacturing employment in middle-income countries sank to 8.9 per cent in 2020, compared with 3.4 per cent in low-income and 3.9 per cent in high-income countries. Some of the worst effects were felt in garment supply chains, which employ large shares of women workers. Despite a rebound in 2021, the fragile and uneven nature of the recovery means that global manufacturing employment has not yet returned to pre-pandemic levels. Fiscal stimulus and vaccination coverage were crucial factors in determining the strength of labour market recovery in 2021.

The number of airline passengers travelling internationally totalled 1.8 billion in 2020, a decline of 60 per cent from the previous year. Seat capacity dropped by half, bringing air traffic totals down to levels not seen since 2003. Financial losses for the airline industry totalled $370 billion in 2020, and airports and air navigation services providers lost a further $115 billion and $13 billion, respectively. Global air passenger traffic recovered modestly in 2021 with 2.3 billion passengers, compared with 4.5 billion in 2019, resulting in financial losses of $324 billion. In 2021, domestic air traffic reached 68 per cent of 2019 levels, while international traffic remained weak – at 28 per cent – mostly due to sporadic outbreaks of COVID-19 variants and travel restrictions.

In contrast with passenger traffic, air cargo traffic exceeded pre-pandemic levels by the beginning of 2021 and is maintaining robust growth. This upturn has been driven by a resurgence of economic activity along with a roaring e-commerce industry during the pandemic.

Small-scale enterprises were hit hard by the pandemic, and many collapsed. Due to their scale, limited financial resources and greater dependency on supply chains, these industries are more vulnerable to economic downturns than their larger-scale counterparts. The impact has been even more severe for small informal enterprises, partly because they have been unable to access formal lines of credit or COVID-19-related government support.

Government support plays a key role in helping small enterprises survive and thrive during and after a crisis. However, only about one in three small manufacturers are benefiting from a loan or line of credit, according to limited survey data collected in 2020–2021. Such stimulus is rarely available in low-income countries. Only 15.7 per cent of small-scale industries in Africa received those forms of credit, compared with 44.2 per cent in Latin America and the Caribbean.

Higher-technology manufacturing industries fared better than lower-tech industries during the pandemic, and therefore recovered faster. Most industries using medium and high technology – such as computers, electronics and pharmaceuticals – have already returned to pre-pandemic production levels, except for motor vehicle and other transport equipment manufacturing. Production of motor vehicles is facing larger challenges worldwide due to supply chain disruptions of resources and intermediate goods. In comparison, lower-tech industries, such as textiles and clothing, or coke and refined petroleum products, remain below their pre-pandemic levels. The manufacture of basic consumer goods, such as food products, has seen a stable growth trajectory since the pandemic, with limited losses.

Most of the world’s population are covered by a mobile-broadband signal, but blind spots remain

In most developing countries, mobile broadband (third generation (3G) or higher) is the main, and often, the only way to connect to the Internet. But in addition to connectivity, potential users need an Internet-enabled device and the skills to use it. The relatively high cost of such devices, along with the lack of literacy and digital skills, remain steep barriers to mobile Internet adoption and use.

While virtually all urban areas of the world are covered by a mobile-broadband network, gaps persist in rural areas. In LDCs, 14 per cent of the rural population have no mobile network coverage at all, while another 12 per cent have only 2G coverage.

Note: The values for 2G and 3G networks show the incremental percentage of the population that are not covered by a more advanced technology.