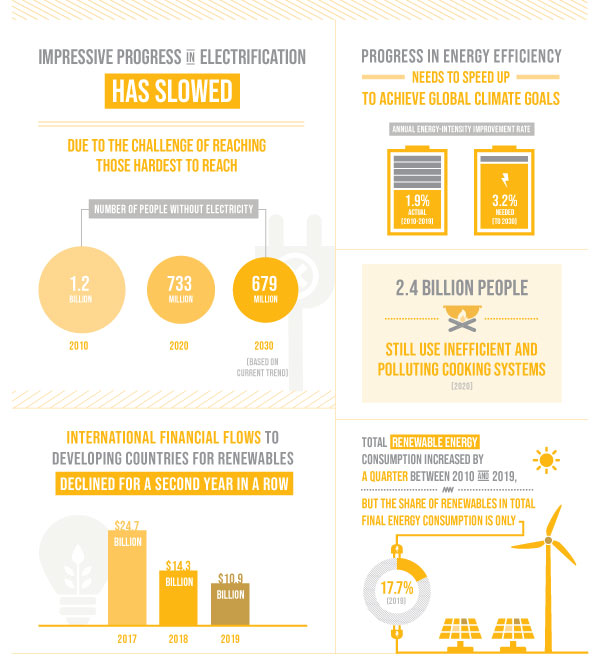 The world continues to advance towards sustainable energy targets. Nevertheless, the current pace of progress is insufficient to achieve Goal 7 by 2030. Improvements in energy efficiency, for example, will need to accelerate to reach the climate goal of reducing greenhouse gas emissions. Hundreds of millions of people still lack access to electricity, and slow progress towards clean cooking solutions means that the health of 2.4 billion people is at risk. Huge disparities in access to modern sustainable energy persist, leaving the most vulnerable even further behind. In some countries, the COVID-19 pandemic has weakened or reversed advances already made. Rising commodity, energy and shipping prices have increased the cost of producing and transporting solar photovoltaics modules, wind turbines and biofuels worldwide, adding uncertainty to a development trajectory that is already far below Goal 7 ambitions. Achieving energy and climate goals will require continued policy support and a massive mobilization of public and private capital for clean and renewable energy, especially in developing countries.

Progress in electrification has slowed, with the challenge of reaching those hardest to reach

The global electricity access rate increased from 83 per cent in 2010 to 91 per cent in 2020. Over this period, the number of people without electricity shrank from 1.2 billion to 733 million. However, the pace of progress has slowed in recent years, due to COVID-19 and the increasing complexity of reaching those hardest to reach. In 2018–2020, the electricity access rate rose by an average of 0.5 percentage points annually compared to 0.8 percentage points in 2010–2018.

In 2020, over three quarters (77 per cent) of the global population without electricity lived in sub-Saharan Africa, mainly in rural areas. Due to economic pressures imposed by the pandemic, up to 90 million people connected to electricity in Africa and developing countries in Asia could not afford to have an extended bundle of services that year. If current trends continue, only 92 per cent of the world’s population will have access to electricity in 2030, leaving 670 million people unserved. A major push is needed to reach those living in least developed and in fragile and conflict-affected countries.

Proportion of population with access to electricity, 2010 and 2020 (percentage)

Between 2010 and 2020, the proportion of people with access to clean cooking fuels and technologies increased by 12 percentage points, reaching 69 per cent. This means that an estimated 2.4 billion people still relied on inefficient and polluting cooking systems in 2020. Much of the progress was concentrated in five countries: Brazil, China, India, Indonesia and Pakistan. Excluding those countries, the global access rate remained unchanged over this period. While more than half of those without access live in Asia, 19 of the 20 countries with the lowest proportion of the population with access were LDCs in Africa. If current trends continue, only 76 per cent of the global population will have access to clean cooking fuels and technologies by 2030. The adoption of clean cooking solutions can reduce health risks from household air pollution, support a green and healthy recovery and fuel economic growth in low- and middle-income countries.

Meeting global energy and climate objectives will require a major push in the deployment of renewables, with massive finance mobilization

Share of renewable energy in total final energy consumption and by end use, 2010 and 2019 (percentage)

The target for global energy efficiency remains within reach, but only with significant investment on a systematic scale

Improving energy efficiency is fundamental to meeting global climate goals. The 2030 target calls for an annual improvement in energy intensity of 2.6 per cent, a doubling of the rate observed between 1990 and 2010. Global primary energy intensity – defined as the ratio of total energy supply to GDP – improved from 5.6 megajoules per US dollar (2017 purchasing power parity) in 2010 to 4.7 in 2019, with an average annual improvement rate of 1.9 per cent. To meet the Coal 7 target, and make up for lost time, energy intensity improvements until 2030 will need to average 3.2 per cent a year. The target remains within reach, but only with significant investment in cost-effective energy efficiency improvements on a systematic scale. Regional progress varies due to differences in economic structure, energy supply and electrification. The only region that has reached the target so far is Eastern and South-Eastern Asia, with an annual average rate of 2.7 per cent in 2010–2019, driven by strong economic growth.

International public financing for renewable energy had already slowed before the pandemic, despite the growing urgency of climate change

Loans captured over 52 per cent of commitments in 2019. Grants comprised almost 17 per cent, signalling an increase in debt-free instruments to support developing countries. Another up-and-coming instrument is shares in collective investment vehicles, such as investment funds, which grew to $191 million in 2019, up by 91 per cent from 2018. LDCs received 25.2 per cent of commitments in 2019 compared with 21 per cent in 2018, but the amount decreased from $3.0 billion to $2.7 billion.

International financial flows to developing countries in support of clean and renewable energy, by type of technology, 2000–2019 (billions of US dollars at 2019 prices and exchange rates)