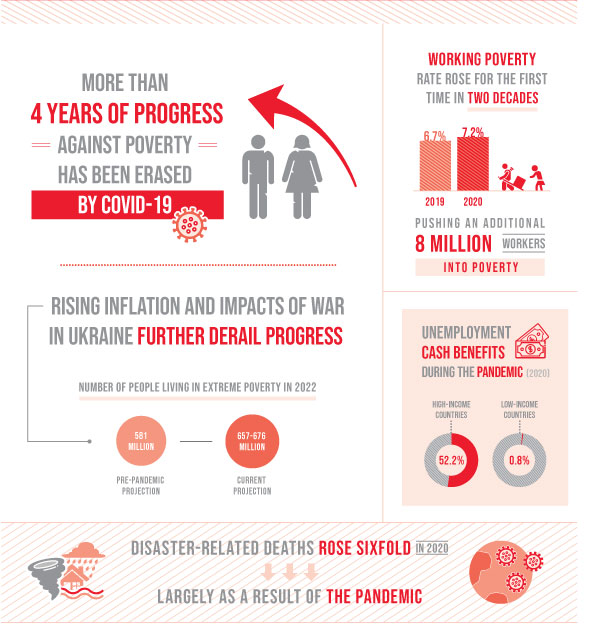 The coronavirus disease 2019 (COVID-19) pandemic has put steady progress in poverty reduction over the past 25 years into reverse, with the number of people in extreme poverty increasing for the first time in a generation. Now, rising inflation and the impacts of the war in Ukraine may derail progress further. The combined crises could lead to an additional 75 million to 95 million people living in extreme poverty in 2022, compared with pre-pandemic projections. While almost all countries have introduced new social protection measures in response to the crisis, many were short-term in nature, and large numbers of vulnerable people have not yet benefited from them. As things stand, the world is not on track to end poverty by 2030, with poorer countries now needing unprecedented levels of pro-poor growth to achieve this goal.

Between 2015 and 2018, global poverty continued its historical decline, with the extreme poverty rate falling from 10.1 per cent to 8.6 per cent. This means that the number of people living on less than $1.90 a day dropped from 740 million to 656 million over this period. COVID-19 has made a severe dent in that progress. Nowcasts suggest that the global poverty rate increased sharply from 2019 to 2020, from 8.3 per cent to 9.2 per cent, the first rise in extreme poverty since 1998 and the largest since 1990. This erased more than four years of steady gains. It also means that an additional 93 million people worldwide were pushed into extreme poverty because of the pandemic.

Little progress has been made since then in catching up to the pre-COVID trend. Forecasts for 2022 estimate that 75 million more people than expected prior to the pandemic will be living in extreme poverty. Rising food prices and the broader impacts of the war in Ukraine could push that number even higher, to 95 million, leaving the world even further from meeting the target of ending extreme poverty by 2030.

In 2020, the share of workers living in extreme poverty rose for the first time in two decades

In 2020, for the first time in two decades, the share of the world’s workers living in extreme poverty increased, rising from 6.7 per cent in 2019 to 7.2 per cent, pushing an additional 8 million workers into poverty. This reflects lost working hours and reduced incomes for many during the COVID-19 crisis. Although the working poverty rate declined slightly in 2021, to 6.9 per cent, it remains higher than before the pandemic. Most regions have not yet recovered to their 2019 levels. The two regions with the highest working poverty rates – sub-Saharan Africa and Oceania (excluding Australia and New Zealand) – have also experienced the largest increases in the past two years. The pandemic has likely exacerbated existing disparities in working poverty rates for youth and women, who were already more likely than adults and men to be among the working poor. Youth and women were disproportionately affected by working-hour losses and pay cuts in 2020, meaning these gaps are likely to widen.

Strong social protection systems are essential for mitigating the immediate and long-term consequences of the COVID-19 pandemic and preventing people from falling into poverty. However, by 2020, only 46.9 per cent of the global population were effectively covered by at least one social protection cash benefit, leaving 4.1 billion people unprotected. In response to the COVID-19 crisis, almost 1,900 social protection measures were announced by 211 countries and territories, although these were mostly (92 per cent) short term in nature. Around 39 per cent of the measures introduced were directed towards vulnerable groups, while 26 per cent related to income security and unemployment protection, showing the high importance of social assistance and unemployment benefits in responding to the crisis. Still, only 96 countries have unemployment protection schemes in place and, even where such schemes exist, effective coverage is often limited, especially in countries with high levels of informal employment. Globally, in 2020, only 43.1 per cent of the labour force were legally covered by unemployment benefit schemes, and only 18.6 per cent of unemployed workers worldwide actually received unemployment benefits.

Similarly, only 28.9 per cent of people considered vulnerable – all children, along with older people and those of working age not covered by social insurance – had access to social assistance cash benefits in 2020, with coverage varying widely across regions. Sixty-three per cent of those considered vulnerable in high-income countries received cash benefits compared with just 7.8 per cent in low-income countries.

Disaster-related deaths rose sixfold in 2020, largely as a result of the pandemic

Biological hazards such as COVID-19, along with other disasters such as tropical cyclones and floods, can worsen poverty and slow hunger alleviation. In 2020, based on reporting from 80 countries under the Sendai Framework, the disaster-related mortality rate was 5.74 persons per 100,000 population. This estimation takes into account deaths resulting from disasters of all origins, including COVID-19. At least 80 per cent of disaster-related mortality that year was estimated to be due to the coronavirus. Even without considering significant underreporting (the World Health Organization (WHO) estimates global excess deaths of 4.5 million in 2020), this figure is already in stark contrast to the 2015-2019 period, when the disaster-related mortality rate averaged 0.93 persons per 100,000 population.

As countries were coping with the economic fallout of the pandemic, 33 countries reported $16.5 billion in direct economic losses in 2020, due to other disasters. Of this amount, 41 per cent ($6.8 billion) was in the agriculture sector and 38 per cent ($6.2 billion) related to losses resulting from damaged or destroyed critical infrastructure

Meanwhile, significant progress has been made towards increasing the number of countries adopting national disaster risk reduction strategies. By the end of 2021, 123 countries reported having such strategies in place, up from just 55 in 2015.