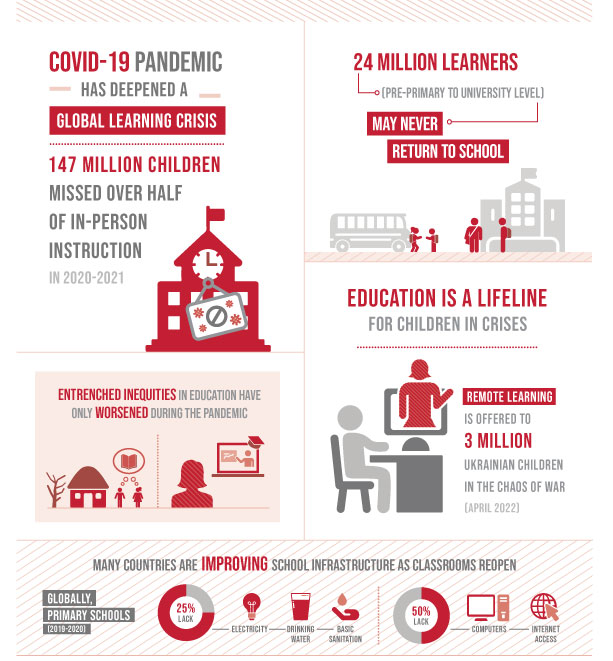 The COVID-19 pandemic has deepened a crisis in education, with severe disruptions in education systems worldwide. School closures have had worrisome consequences for children's learning and well-being, particularly for girls and those who are disadvantaged, including children with disabilities, rural dwellers and ethnic minorities. An estimated 147 million children missed more than half of their in-person instruction over the past two years. As a result, this generation of children could lose a combined total of $17 trillion in lifetime earnings (in current value). Governments need to implement ambitious programmes to ensure that all children return to school, recover their learning losses, and have their psychosocial needs met.

COVID-related school closures threaten to reverse years of progress aimed at keeping children in school. Before the pandemic, 17 per cent of children and youth globally were out of primary and secondary school, compared to 26 per cent in 2000. From March 2020 through February 2022, schools worldwide were fully or partially closed for 41 weeks, on average. Latin America and the Caribbean experienced the longest school closures - more than 60 weeks in the past two years.

The longer children are out of school, the less likely they are to return. According to a 2020 report by the United Nations Educational, Scientific and Cultural Organization (UNESCO), 24 million learners from the pre-primary to university level are at risk of not returning to school. Students from more disadvantaged backgrounds are at higher risk due to socioeconomic factors such as the need to generate income, increased care responsibilities, and early and forced marriage. Those who were unable to access distance learning during confinement are also at higher risk of not returning to school.

The COVID-19 pandemic came at a time when the world was already struggling with a crisis in learning: too many children lacked the fundamentals of reading and numeracy. Based on pre-pandemic data from 2015 to 2019, the proportion of children meeting the minimum required proficiency in reading at the end of lower-secondary school was between 70 and 90 per cent in most high-income countries. That proportion fell below 60 per cent in almost all middle- and lowincome countries, dropping to less than 10 per cent in some countries.

Proportion of children meeting minimum requirements in reading proficiency at the end of lower-secondary school (2015-2019) and length of school closures during the first two years of the pandemic, by country income groups

Entrenched inequities in education have only worsened during the pandemic

Over the years, education has become much more widely accessible. That said, inequalities in access persist among various socioeconomic groups. In 2020, for example, 3 out of 4 children attended some form of organized learning one year before the official primary school age. Yet, participation was highly unequal: among countries with available data, disparities in attendance were found based on gender (39 per cent), urban or rural location (76 per cent) and household wealth (86 per cent). The data showed that girls tend to score higher than boys in reading proficiency at the end of primary school. They also showed that children living in rural areas and in the poorest households are consistently more disadvantaged in term of educational participation and outcomes than their urban, wealthier peers.

School closures during the COVID-19 pandemic have deepened inequality in education, with marginalized populations most affected. In the context of remote learning, for example, children from poorer backgrounds are less likely to have the devices and computer skills they need to get online, or a home environment conducive to learning. Ensuring a safe return to school and equity in education in the difficult transition period ahead needs to be a priority.

Countries are improving schools as they reopen, but psychosocial support for students is often overlooked

One key to encouraging school enrolment and retention is ensuring adequate facilities and services. Yet, even basic school infrastructure is far from universal. In 2019-2020, about one quarter of primary schools worldwide lacked access to electricity, drinking water and basic sanitation facilities. Only half of primary schools had computers and Internet access or facilities that were fully accessible, including for children with disabilities. In all of these areas, LDCs lag furthest behind.

Recovering from the pandemic - and building back better - will require a significant investment in school infrastructure and services. According to a recent survey by the United Nations Children's Fund (UNICEF), about half of countries with data reported taking "significant additional measures" (as opposed to a "small-scale increase in measures") in water, sanitation and hygiene services in schools after their reopening. This proportion remains similar across countries in various income groups. However, only 20 per cent of countries undertook significant measures to provide additional mental health and psychosocial support for students. This is disturbing considering the recent uptick in anxiety and depression among learners.

The war in Ukraine is having a particularly damaging effect on its youngest citizens. As of May 2022, two-thirds of the country's children had been displaced from their homes, some 130 educational institutions had been destroyed and more than 1,500 schools damaged. In spite of these challenges, education in Ukraine goes on: remote learning, often interrupted by air-raid sirens, has been offered to millions. In April 2022, nearly 3 million children (the majority of school-aged students) showed up for online classes. Video lessons have also been broadcast on television. Remote schooling provides a safe "space" and a semblance of normalcy for children affected by war. It also serves as a lifeline, providing children with access to information on the risks of deadly explosive ordnance, for example, and connects them and their parents to essential health and psychosocial services.

Millions of children and youth worldwide are in similar situations as those in Ukraine whose learning has been interrupted - by war, disasters and other crises. Providing safe, inclusive and continuous education to those girls and boys is crucial in helping them cope with current and future crises. It is one of the soundest and most important investments that can be made in human and socioeconomic development.