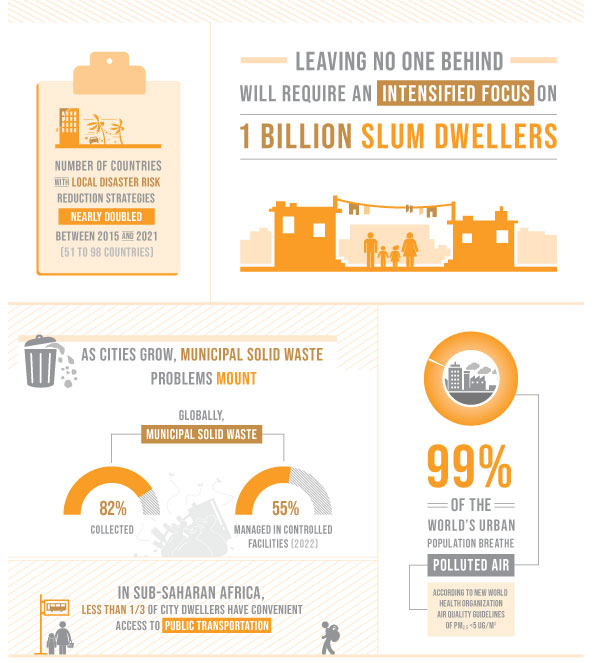 Today, more than half the world’s population live in cities. By 2050, an estimated 7 out of 10 people will likely live in urban areas. Cities are drivers of economic growth and contribute more than 80 per cent of global GDP. However, they also account for more than 70 per cent of global greenhouse gas emissions. If well-planned and managed, urban development can be sustainable and can generate inclusive prosperity. However, rapid and poorly planned urbanization leads to many challenges, including a shortage of affordable housing, insufficient infrastructure (such as public transportation and basic services), limited open spaces, unsafe levels of air pollution, and increased climate and disaster risk. The deep inequalities exposed by the COVID-19 pandemic and other cascading crises further highlight the importance of sustainable urban development. Strengthening the preparedness and resilience of cities, including through high-quality infrastructure and universal access to basic services, is crucial in the recovery phase and in our ability to respond to future crises.

In 2020, about one in four urban dwellers lived in slums or informal settlements. This translates into more than 1 billion people, 85 per cent of whom live in three regions – Central and Southern Asia (359 million), Eastern and South-Eastern Asia (306 million), and sub-Saharan Africa (230 million). The region with the highest percentage of slum dwellers is sub-Saharan Africa, where more than half the urban population live in slums. Empirical analysis shows that a 1 per cent increase in urban population growth will increase the incidence of slums by 2.3 per cent and 5.3 per cent in Africa and Asia, respectively. The reasons behind slum formation in developing regions are many: rapid urbanization; ineffective planning; lack of affordable housing options for low-income households; dysfunctional urban, land and housing policies; a dearth of housing finance; and poverty. To achieve the Sustainable Development Goals, the world’s 1 billion slum dwellers must be given the support they need to lift themselves out of poverty and live free from exclusion and inequality. Adequate and affordable housing is key to improving their living conditions.

Air quality is now being monitored in a record number of cities, but it remains substandard worldwide

Global PM2.5 concentrations have steadily decreased, with an 11 per cent reduction over a decade. More countries now recognize the threat to human health posed by air pollution and the importance of measuring and communicating air-quality levels. A record number of cities (over 6,000) in 117 countries are now monitoring air quality, double the number since 2015. Despite this progress, 99 per cent of the world’s urban population live in areas that exceed the new WHO guidelines on air quality, established in 2021, for PM2.5 of less than 5 micrograms per cubic metre (reduced from the 10 microgram limit set in 2005). People in low- and middle-income countries are disproportionately affected by outdoor air pollution, with 91 per cent of the 4.2 million premature deaths.

According to data from 2017–2019, which measured three-year annual averages, cities in Central and Southern Asia have the worst air pollution in the world, more than two times the global average.

Between 2015 and 2030, annual passenger traffic globally is projected to increase by 50 per cent, and the number of cars on the road is likely to double. Public transportation systems that are well-designed and effective can promote mobility and enable people to access education, health care, employment and markets, while also reducing traffic congestion and pollution. They improve the efficiency, inclusivity and safety of urban areas, while also helping to battle poverty and climate change.

According to 2020 data from 1,510 cities around the world, only about 37 per cent of urban areas are served by public transport. Due to variations in population density within cities, this translates to 52 per cent of the urban population with convenient access to public transport (meaning that they reside within 500 metres walking distance of low-capacity transport systems – such as bus stops or trams – or within 1,000 metres of high-capacity systems, such as trains and ferries). City governments still have a massive task ahead of them in seeking to enhance the availability and use of accessible, inclusive, safe, reliable and efficient public transport systems.

As cities continue to grow, the longstanding problem of municipal solid waste continues to mount

As urbanization increases, the world’s cities and metropolises are struggling to cope with the mounting problem of municipal solid waste. When such waste is not collected and managed responsibly, it can become an incubator for infection and a source of plastic pollution and greenhouse gas emissions. In 2022, an average of 82 per cent of municipal solid waste globally was being collected and 55 per cent was being managed in controlled facilities. Municipalities in sub-Saharan Africa and Oceania have an average collection rate of less than 60 per cent. In Asia and in Latin America and the Caribbean, cities have relatively higher collection rates, ranging from 70 to 85 per cent. In Central and Southern Asia, the gap between the collection rate and controlled management rate is larger than in other regions, suggesting that many cities still rely on open dumpsites. Significant investment is needed in the development and maintenance of waste management infrastructure, especially in low- to middle-income countries. This must be accompanied by improved policy interventions and strengthened environmental law enforcement for controlled management of municipal solid waste.

Open public spaces in congested urban areas play a vital role in social and economic life, but are not widely accessible

In preparing for a post-COVID world, urban planners are rethinking the link between economic recovery and the equitable distribution of open public spaces. Parks, boulevards and playgrounds, for example, not only enhance the quality of urban life, but are places where people can interact, playing a vital role in social and economic life. Data for 2020 from 962 cities around the world point to poor distribution of such spaces. Only about 37.8 per cent of urban residential neighbourhoods are conveniently located within 400 metres walking distance to an open public space. That translates to about 45.2 per cent of the urban population. As policymakers and city authorities work to redesign and retrofit the spatial configuration of urban areas, it is important to consider the distribution of open public spaces as well as green areas throughout the city.

The impact of disasters is felt first and foremost by those on the front lines. Thus, local disaster risk reduction strategies are critical. Between 2015 and 2021, the number of countries reporting the existence of such strategies nearly doubled, from 51 to 98. Considering all the countries reporting, the average share of local governments that have adopted such strategies increased from 51 per cent in 2015 to 66 per cent in 2021. Countries have made efforts to align disaster risk reduction, climate change adaptation and development plans at the local level. However, a multi-hazard approach to local resilience-building is essential given the systemic and cascading nature of risk, often fuelled by climate change and, more recently, by the COVID-19 pandemic.