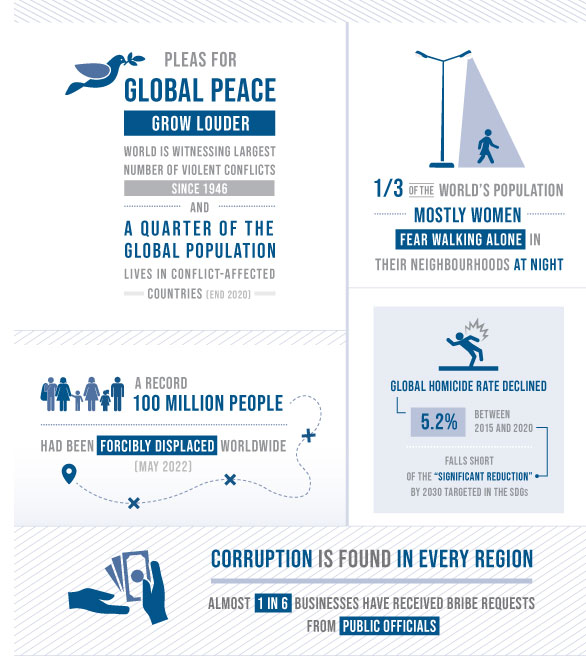 Pleas for global peace are growing louder as the world witnesses the largest number of violent conflicts since 1946, with one quarter of the global population living in conflict-affected countries at the end of 2020. Amid these crises, and despite movement restrictions prompted by COVID-19, forced displacement has continued and even grown. As of May 2022, a record 100 million people had been forcibly displaced worldwide. This staggering number will increase along with the widening repercussions of the war in Ukraine. The cost of war and conflict is high, affecting the poor and vulnerable the most and leading to global impacts and escalating human rights violations and humanitarian needs. Exercising fundamental freedoms in the defence of others remains deadly, with 320 fatal attacks against human rights defenders, journalists and trade unionists recorded in 35 countries in 2021. Ending armed conflicts, strengthening institutions and enacting inclusive and equitable legislation that protects the human rights of all persons are necessary preconditions for sustainable development.

The United Nations recorded at least 13,842 deaths associated with 12 of the world's deadliest armed conflicts in 2021. Among them were 11,075 civilians, and 1 in 8 were women or children. Though unacceptably high, the number of civilian conflict-related deaths dropped by 17 per cent compared to 2020, and by 69 per cent compared to 2015. Many of these conflict situations are fragile, with a growing risk of escalation and associated violations of international human rights and international humanitarian law.

In May 2022, the number of people forced to flee conflict, violence, human rights violations and persecution has surpassed 100 million. An estimated 41 per cent of people forcibly displaced worldwide were children, according to 2021 data. Children in particular have suffered immeasurable damage and disruption to their lives and development due to conflict, enduring physical and sexual violence, unmet basic needs, lack of access to education and wide-ranging mental health problems caused by trauma. Incidents of all forms of violence against children in Ukraine alone are estimated to be in the tens of thousands, disproportionately affecting institutionalized children and children with disabilities. Human rights violations in conflict-affected countries, including human trafficking and forced labour, have increased and international humanitarian law has been disregarded, undermining the global compact of humanity.

In addition to these more obvious consequences of war are other lasting and wide-ranging impacts. For example, the outbreak of war in Ukraine has caused food, fuel and fertilizer prices to skyrocket, disrupted supply chains and global trade and roiled financial markets, potentially leading to a global food crisis. While the humanitarian emergency in that country is currently in the global spotlight, many other conflicts require equal – and sustained – attention and compassion. Over the last decade, the world has spent $349 billion on peacekeeping, humanitarian relief and refugee support.

Unless and until armed conflicts are ended, they will continue to affect all segments of society and hit the most vulnerable the hardest. To prevent further destabilization around the globe, the Secretary-General has called for all parties to armed conflicts to find alternative solutions to fighting and embark on a path of diplomacy and peace.

Tracing is key to curbing illict trade in small arms, but it needs to be strengthened through better global cooperation

Tracing is key to successfully investigating and disclosing the origins of illegal firearms – a crucial step in combating illicit trade in small arms. That said, systematic implementation of tracing remains a challenge globally. Between 2016 and 2020, an average of 28 per cent of seized weapons were reported as successfully traced, according to data from 20 countries. Close to 60 per cent of successfully traced firearms were identified through a national registry, and the other 40 per cent were traced internationally through a foreign registry. This indicates the importance of cooperative practices at the international level, though they are not yet sufficient. Destruction of weapons is another important measure to reduce illicit arms flows. From 2018 to 2019, national authorities destroyed an average of 48 per cent of weapons seized, found or surrendered.

Feeling unsafe in public can fundamentally erode one's sense of well-being and reduce trust and community engagement, becoming an obstacle to development. On average, about 69 per cent of the world's population report feeling safe walking alone at night in the area in which they live – a proportion that has remained stable from 2016 to 2021. However, stark differences are found among regions, with Latin America and the Caribbean reporting the lowest level of perceived public safety and Eastern and South-Eastern Asia reporting the highest. The proportion of women feeling safe walking alone in their local neighbourhoods at night is, on average, 10 percentage points lower than that of men (61 per cent versus 71 per cent), according to 2019–2021 data from 106 countries. This gender gap holds across all regions but is particularly pronounced in Australia and New Zealand (a 27-percentage-point difference) and Northern Africa and Western Asia (a 17-percentage-point difference).

Proportion of the population that feel safe walking alone at night in the area in which they live, by sex, average for 2019-2021 (percentage)

By 2030, it is projected that the global homicide rate will decrease by 19 per cent from the 2015 level, to around 4.8 per 100,000 people. This falls short of the "significant reduction" by 2030 targeted in the Sustainable Development Goals. Accelerated progress will require additional policy interventions aimed at curbing lethal violence in the public arena, along with specific policies aimed at preventing gender-based killings within the home.

Streamlined and transparent business processes can help curb corruption, which is found in every region

Businesses around the world face obstacles and unfair competition due to corruption, which adversely impacts the sustainable development of national economies. Globally, almost 1 in 6 businesses face requests for bribe payments by public officials, most commonly in transactions involving electrical and water connections, construction-related permits, import licenses, operating licenses, and meetings with tax officials. The incidence of bribery varies across regions. Eastern and South-Eastern Asia and LDCs have the highest bribery incidence – affecting about 30 per cent of businesses, whereas the regions of Latin America and the Caribbean and Europe and Northern America have the lowest bribery incidence – 9 per cent and 8 per cent, respectively. Policymakers can reduce the prevalence of bribery by requiring that business processes, such as applications and payments for permits and licenses, are conducted online and are fully transparent.