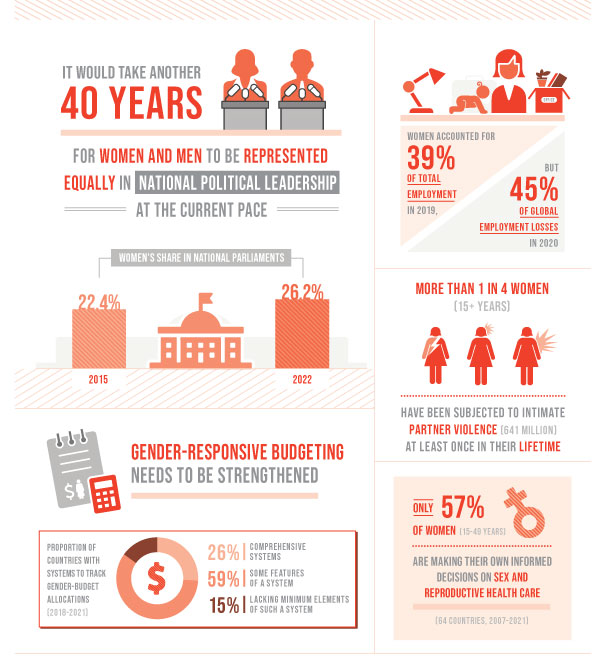 The world is not on track to achieve gender equality by 2030, and the social and economic fallout from the pandemic has made the situation even bleaker. Progress in many areas, including time spent on unpaid care and domestic work, decision-making regarding sexual and reproductive health, and gender-responsive budgeting, is falling behind. Women’s health services, already poorly funded, have faced major disruptions. Violence against women remains endemic. And despite women’s leadership in responding to COVID-19, they still trail men in securing the decision-making positions they deserve. Commitment and bold action are needed to accelerate progress, including through the promotion of laws, policies, budgets and institutions that advance gender equality. Greater investment in gender statistics is vital, since less than half of the data required to monitor Goal 5 are currently available.

Awareness of violence against older women is growing, but data remain limited

Violence against women and girls is found in all countries and affects women of all ages. Globally, 26 per cent of ever-partnered women aged 15 and older (641 million) have been subjected to physical and/ or sexual violence by a husband or intimate partner at least once in their lifetime. Limited evidence points to an intensification of violence against women during the pandemic. A 2021 rapid gender assessment survey in 13 countries, undertaken by the United Nations Entity for Gender Equality and the Empowerment of Women (UN Women), found that 45 per cent of women reported that they or a woman they know has experienced some form of violence since COVID-19.

Global awareness of violence against older women specifically is growing, but data on the subject are limited, and the nature, scale, severity and complexity of such violence may be underestimated. Less than 10 per cent of eligible data on intimate partner violence capture the prevalence of such violence among women aged 50 and older. Limited evidence from 2000–2018 found that 4 per cent and 7 per cent of women in this age group experienced physical and/or sexual violence by an intimate partner in the last 12 months. Older women, however, may be vulnerable to specific forms of violence not usually measured in surveys on violence against women, such as economic exploitation, or being ostracized or neglected.

Perpetrators of such violence, aside from intimate partners, can include adult children and other relatives, strangers, caregivers and neighbours.

In 2021, nearly one in five young women were married before the age of 18. The highest rates of child marriage are found in sub-Saharan Africa and Southern Asia, where 35 per cent and 28 per cent of young women, respectively, were married in childhood. Globally, the prevalence of child marriage has declined by about 10 per cent in the past five years. However, the effects of the COVID-19 pandemic have put more girls at risk, owing to economic shocks, school closures and interruptions in social services. By 2030, up to 10 million more girls are likely to become child brides, in addition to the 100 million girls who were projected to be at risk before the pandemic.

Another persistent harmful practice and human rights violation is female genital mutilation (FGM). At least 200 million girls and women alive today have been subjected to FGM, mainly in the 31 countries where the practice is concentrated. In many countries, it remains as common today as it was three decades ago. Even in countries where the practice has become less prevalent, progress would need to be at least 10 times faster to meet the global target of eliminating FGM by 2030. Education is one key to its elimination. Opposition to FGM is highest among girls and women who are educated. Girls whose mothers have a primary education are 40 per cent less likely to be cut than those whose mothers have no education.

Progress in women’s access to leadership positions, in both political and economic spheres, remains sluggish

During the pandemic, women leaders have acted decisively and effectively to implement and manage response and recovery efforts, prioritizing measures that address the most vulnerable groups. Despite this widely acknowledged success, the pace of progress on women’s representation in decision-making positions is discouraging. As of 1 January 2022, the global share of women in lower and single houses of national parliaments reached 26.2 per cent, up from 22.4 per cent in 2015. Women’s share is slightly over one third in local governments. At this pace, it would take another 40 years for women and men to be represented equally in national parliaments.

Working women, including those in managerial positions, have been disproportionately affected by the COVID-19 pandemic. Many have had their hours reduced or left the workforce altogether due to increased unpaid care work at home. In 2019, before the pandemic, women accounted for 39.4 per cent of total employment. In 2020, women represented nearly 45 per cent of global employment losses. The share of women in managerial positions worldwide saw only slight improvement from 2015 to 2019, increasing from 27.2 to 28.3 per cent. That share remained unchanged from 2019 to 2020, which is the first year without an increase since 2013.

In many countries, women still lack the legal right to autonomy over their own bodies

Only 57 per cent of women aged 15 to 49 who are married or in a union make their own informed decisions regarding sexual relations, contraceptive use and reproductive health care, according to data from 64 countries for the period 2007–2021. Critical to this decision-making ability is the extent to which laws prevent or enable access to relevant health care and information. Among 115 countries with data, countries had in place an average of 76 per cent of the laws and regulations needed to guarantee full and equal access to sexual and reproductive health and rights.

The effects of the COVID-19 pandemic are likely having a significant impact on women’s ability to exercise their bodily autonomy. In the first year of the pandemic, an estimated 1.4 million additional unintended pregnancies occurred in lower- and middle-income countries. This could be due to several factors. Women may have experienced financial hardships that prevented them from making their own decisions to seek health care and contraception. During lockdown periods, women may have found it harder to say no to sex due to increased tensions in the home related to health, finance and social isolation. Finally, disruption or suspension of sexual and reproductive health care may have made these essential services inaccessible to women.


Proportion of women aged 15-49 years who make their own informed decisions regarding sexual relations, contraceptive use and reproductive health care, most recent data 2007-2021 (percentage)

Owning rights to land, specifically agricultural land, reduces women’s reliance on male partners and relatives. Yet, in 30 countries, less than half of women had ownership and/or secure tenure rights over agricultural land, according to 2009–2020 data from 36 countries. In 18 of these countries, the share of men having ownership was twice that of women. Gender-responsive policy and legal frameworks are essential to advancing women’s rights to land. However, only 15 out of 52 reporting countries included sufficient provisions in their legal frameworks to offer women good protection in this regard. The most prominent areas in which positive results have been achieved are in succession rights and in protection from being disposed in land transactions.

Building back better from COVID-19 means doing so in a way that advances gender equality and women’s empowerment. Fundamental to this goal is ensuring that the allocation and spending of public financing takes gender equality into account. According to data reported by 105 countries and areas for the period 2018–2021, only 26 per cent of countries have comprehensive systems in place to track public allocations for gender equality, 59 per cent have some features of such a system, and 15 per cent do not have the minimum elements of such a system. Accelerated action is needed to expand comprehensive implementation of gender-responsive budgeting and strengthen its monitoring and evaluation.