Protected and restored ecosystems and the biodiversity they support can help mitigate climate change and provide increased resilience in the face of increased human pressures and mounting disasters. Healthy ecosystems also produce multiple benefits for all communities: clean air, water, food, raw materials and medicines, to name a few. To date, progress in preserving and sustainably using terrestrial ecosystems and protecting biodiversity has been uneven. The pace of forest loss has slowed, and improvements continue to be made in managing forests sustainably and safeguarding areas important for biodiversity. That said, accelerating biodiversity loss, along with continued poaching and trafficking of wildlife, is alarming. Moreover, from 1998 to 2013, about one fifth of the Earth’s land surface covered by vegetation showed persistently declining trends in productivity. Soil and land degradation undermines the security and development of all countries. 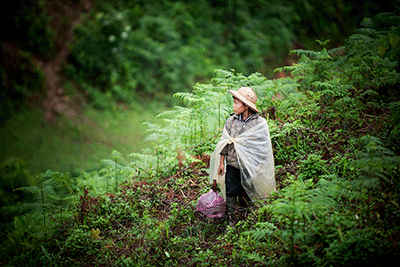 More key biodiversity areas are being protected, although progress has slowed in recent years

Globally, 15 per cent of terrestrial and freshwater environments are covered by protected areas. These areas can play a critical role in achieving sustainable development if they are effectively managed and strategically located. Protecting key biodiversity areas (KBAs)—sites that contribute significantly to global biodiversity—is necessary to strengthen natural resource management and biodiversity conservation. To date, more than 15,000 KBAs have been identified worldwide.

Protecting key sites important for terrestrial, freshwater and mountain biodiversity is vital for ensuring long-term and sustainable use of these various natural resources. Globally, between 2000 and 2017, average coverage of terrestrial, freshwater and mountain KBAs by protected areas increased from 35 to 47 per cent, from 32 to 43 per cent, and from 39 to 49 per cent, respectively. While this upward trend is encouraging, recent growth in KBAs covered by protected areas has been modest, with an increase of only 1 to 2 percentage points since 2010.

Average proportion of each terrestrial, inland freshwater and mountain KBA that is covered by protected areas, 2000, 2010 and 2017 (percentage)

Note: Figures for each region are calculated as the proportion of each KBA covered by protected areas, averaged across all KBAs within the region. Oceania* refers to Oceania excluding Australia and New Zealand.

The world’s forest area continues to shrink, but the rate of loss is slowing


Forests protect watersheds, mitigate natural disasters, nurture biodiversity and sequester carbon. While the world’s forest area continues to shrink, the pace of forest loss has slowed. From 2010 to 2015, the annual net loss of forest area worldwide was less than half that of the 1990s. More forests are being protected, and areas under long-term management plans and voluntary certification have increased. The proportion of land area covered by forest decreased from 31.6 per cent in 1990 to 30.8 per cent in 2010 and 30.6 per cent in 2015. Most forest loss can be attributed to deforestation in sub-Saharan Africa and in Latin America and the Caribbean.

Corals, amphibians and cycads face a growing threat of extinction


Biodiversity loss is occurring at an alarming rate, according to the Red List Index. The index measures trends in the extinction risk of various species. Available data indicate that three groups—corals, amphibians and cycads—are in serious decline due to distinct and worsening threats. Bleaching, driven by climate change and local impacts, has affected the health of coral reefs worldwide. Reefs support the highest level of marine biodiversity in the world, yet they are in jeopardy of disappearing completely by 2050. Severe bleaching events are already affecting reefs, as seen in the Great Barrier Reef during 2016 and 2017.

Amphibians also face a high risk of extinction, with 41 per cent already threatened. Many amphibian species are found in a single location, and habitat loss and the spread of disease, such as chytrid fungal disease, present a grave danger. Meanwhile, many cycads, an ancient group of cone-producing plants, are threatened by unsustainable exploitation and habitat destruction.


Illicit poaching and trafficking of wildlife continues to thwart conservation efforts, with nearly 7,000 species of animals and plants reported in illegal trade involving 120 countries. Illicitly trafficked species are normally found far from their original source after having been transported through multiple countries. Iconic species, such as tigers, elephants and rhinos, along with many lesser-known animals, plants and marine life, face intense pressures for survival. Poached and trafficked wildlife are found in many distinct and often-unrelated markets. They are used in a range of industries, from furniture to fashion, each subject to unique dynamics and volatile trafficking patterns. Demand for a given wildlife product can grow quickly, before the international community can effectively respond. In 2013, elephant ivory, rosewood, rhinoceros horn and reptiles comprised 70 per cent of total wildlife seizures. Addressing these dynamics requires a detailed understanding of markets that make use of wild-sourced materials and products, along with greater regulation of these sectors.

Note: Other wildlife include corals, sturgeons, marine turtles, parrots, big cats, tortoises, raptors and others. To combine seizures of disparate wildlife products, some common unit is required, and measures such as quantity and weight will not suffice. The "standard value" used here is based on declared import values for similar legal products in a reference market and is intended to give a sense of relative value, not an absolute monetary valuation.