Quality education and lifelong learning opportunities for all are central to ensuring a full and productive life to all individuals and to the realization of sustainable development. Despite considerable progress in school enrolment, millions of children remain out of school, especially where educational systems struggle to keep up with population growth. Even when more children are enrolled, many do not acquire the basic skills. Quality education is hampered by the lack of trained teachers and adequate school facilities. Achieving this Goal will require intensified efforts, particularly in sub-Saharan Africa and Southern Asia, targeted to vulnerable populations, specifically persons with disabilities, indigenous people, refugees and the rural poor. 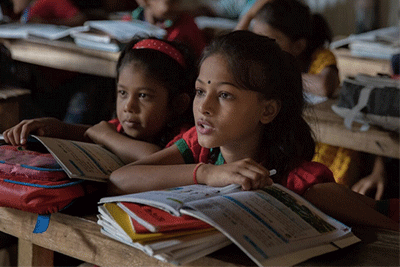 In the poorest countries, only 40 per cent of children participate in education one year before the start of primary school

Early childhood is a critical period for a child’s cognitive development. Organized learning before the official start of primary school has been shown to boost a child’s social, emotional and intellectual development and support readiness for primary education and future learning. Pre-primary education is, in fact, considered an important part of a holistic and robust educational system. In 2014, two thirds of children worldwide participated in pre-primary or primary education in the year prior to the official entrance age to primary school. However, in sub-Saharan Africa, the least developed countries (LDCs) and landlocked developing countries (LLDCs), the rate was only 4 in 10 children, versus 9 in 10 children in Europe and Northern America, and Latin America and the Caribbean.

Participation rate in organized learning one year before the official age of entry into primary school , 2014 (percentage)

Despite progress in enrolment, more than a quarter of a billion school-aged children, adolescents and youth are not in school

Despite considerable progress in primary school enrolment between 2000 and 2014, 9 per cent of primary-school-aged children worldwide were still out of school in 2014. The rate has stagnated since 2008, reflecting pockets of exclusion and hard-to-reach populations. The out-of-school rates for lower and upper secondary-school-aged adolescents and youth decreased, but remain higher than for primary-school-aged children, reflecting the difficulty in keeping pupils in school and the fact that youth have fewer opportunities to enter school in the first place.

Proportion of school-aged children out of school worldwide, by level of education and sex, 2000-2014 (percentage)

Poverty, gender and location of residence all influence reading proficiency

Even though more children than ever are going to school, many do not acquire basic skills. For example, only about half of students at the end of primary education have attained minimum proficiency levels in reading or mathematics in many countries in sub-Saharan Africa and Latin America and the Caribbean.

Results of recent reading assessments show that inequity constitutes a major challenge. Parity indices from the assessments revealed that children and adolescents from the richest 20 per cent of households achieved greater proficiency in reading than those from the poorest 20 per cent of households, and urban children scored higher than rural children. The indices also showed that while out-of-school rates are higher for school-aged girls than boys, girl students had better reading proficiency at the end of primary and lower secondary school than their male counterparts.

Gender, location and wealth parity indices for children and adolescents achieving at least a minimum proficiency level in reading, 2007-2015 (most recent data)

Note: Parity indices below 1 indicate a comparative advantage for the sub-population shown in the lower segment of each graph (i.e., boys, urban and richest 20 per cent). Parity is assumed to occur in the range 0.97-1.03.

Lack of trained teachers and adequate facilities threaten quality education for all, especially in sub-Saharan Africa

In some regions, most notably sub-Saharan Africa, the lack of trained teachers and the poor condition of schools are jeopardising the goal of quality education for all. Sub-Saharan Africa has the lowest percentage of trained teachers in all three levels of schooling: 44 per cent in pre-primary, 74 per cent in primary and 55 per cent in secondary education. Central Asia, in contrast, has the highest percentages (above 90 per cent) in all three levels of education.

In sub-Saharan Africa, schools often lack basic amenities long taken for granted in other parts of the world. Only around one quarter of schools in the region have electricity and less than half have access to basic drinking water. Although 69 per cent have toilets, many still lack separate sanitation facilities for girls and boys. Based on data from 65 developing countries, the median value of the percentage of schools with access to computers and the Internet for pedagogical purposes is above 70 per cent in both primary and secondary education. However, the proportion drops below 40 per cent for many countries in sub-Saharan Africa.

Proportion of trained teachers at each education level, 2011 or latest available data (percentage)


Note: Not all regions are presented due to lack of available data.

Proportion of schools with access to computers for pedagogical purposes, 2014 or latest available year (percentage)