Sustained and inclusive economic growth drives development by providing more resources for education, health, personal consumption, and transport, water and energy infrastructure. Economic growth can also lead to new and better employment opportunities. Sustaining high real economic growth is not easy, however, and only a few LDCs have consistently closed in on the 7 per cent average annual growth target for real GDP. Moreover, economic growth is not necessarily sustainable when countries are depleting their natural resources for the sake of economic growth and thus shifting the burden of environmental degradation and damage to future generations. 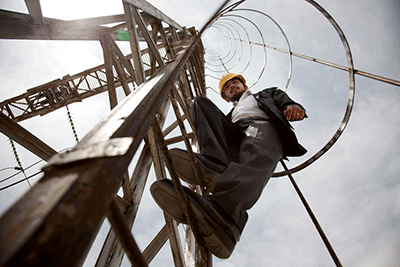 
Growth in labour productivity—measured by GDP per worker—slowed sharply after the financial crisis of 2008-2009, expanding at an average annual rate of 1.9 per cent between 2009 and 2016, compared to 2.9 per cent between 2000 and 2008. Nearly every region of the world with the exception of Oceania, excluding Australia and New Zealand, experienced a significant slowdown, most notably Northern Africa and Western Asia, sub-Saharan Africa, and Europe and Northern America. Growth in labour productivity drives sustainable increases in living standards and real wages. The slowdown therefore represents a negative development for the global economy and for many labour markets around the world.

Youth unemployment is a worldwide problem


The global unemployment rate in 2016 was 5.7 per cent, a slight improvement from 2010 (at 6.1 per cent). Women are more likely to be unemployed than men across all age groups. In 2016, youth (aged 15 to 24 years) were nearly three times more likely than adults to be unemployed, with unemployment rates of 12.8 per cent and 4.4 per cent, respectively. That year, more than one quarter of youth in Northern Africa and Western Asia and more than 15 per cent of youth in Latin American and the Caribbean and in Europe and Northern America were unemployed. Moreover, in about three quarters of countries with data, more than 1 in 10 youth are neither in the educational system nor employed. Young women are more likely than young men to fall into this category in almost 70 per cent of countries with data.

While the situation is improving, 1 in 10 children are still engaged in child labour

Proportion of children aged 5 to 17 years engaged in child labour, by hazardous and non-hazardous work, 2000-2012 (percentage)

Access to financial services enables individuals and firms to manage changes in income, deal with fluctuating cash flows, accumulate assets and make productive investments. Globally, access to automated teller machines (ATMs) increased by 55 per cent between 2010 and 2015. Commercial bank branches grew by 5 per cent over the same period, with the lower growth explained by increased digital access to financial services. There were 60 ATMs and 17 commercial bank branches per 100,000 adults in 2015. Compared to other regions, the availability and growth of both types of access are relatively low in sub-Saharan Africa and Oceania (excluding Australia and New Zealand). Between 2011 and 2014, 700 million adults became new account holders, and the share of adults with an account at a financial institution increased from 51 per cent to 61 per cent. In Australia and New Zealand as well as in Europe and Northern America, access to ATMs has become almost universal while the number of commercial bank branches has declined.