Over the past 15 years, reproductive, maternal and child health have improved greatly. The incidence of communicable diseases has declined, as have premature deaths from non-communicable diseases. Health services have been upgraded through better maternal and reproductive care, targeted disease elimination and control programmes, including broader treatment and vaccination coverage, and increased funding to support medical research and basic health in developing countries. To meet the 2030 targets, however, these interventions need to be expanded, particularly in regions with the highest burden of disease. 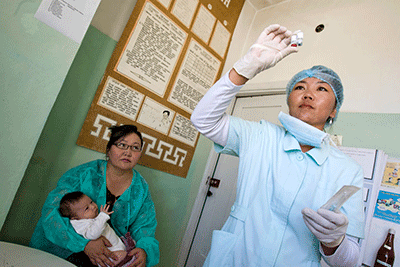 Child mortality has declined rapidly since 2000, but reductions in neonatal mortality need to accelerate

Significant progress has been made in reducing child mortality. In 2015, the mortality rate for children under age 5 worldwide was 43 deaths per 1,000 live births—a 44 per cent reduction since 2000. This translates to 5.9 million under-5 deaths in 2015, down from 9.8 million in 2000. But despite progress in every region, wide disparities persist. Sub-Saharan Africa continues to have the highest under-5 mortality rate, with 84 deaths per 1,000 live births in 2015—about twice the global average.

Children are most vulnerable in the first 28 days of life (the neonatal period). To reduce child deaths even further, greater attention must be focused on this crucial period, where progress has not been as rapid. In 2015, the global neonatal mortality rate was 19 deaths per 1,000 live births, a 37 per cent reduction since 2000. This means that, in 2015, about 2.7 million children died in the first month of life. Neonatal mortality remains highest in Central and Southern Asia and in sub-Saharan Africa: 29 deaths per 1,000 live births in 2015 in both regions.

The share of newborn deaths in all under-5 deaths grew from 40 per cent in 2000 to 45 per cent in 2015, due to the slower pace of progress among newborns. It is estimated that 40 per cent of neonatal deaths could be prevented by providing high-quality care for both mother and baby around the time of birth.

Global number of deaths in the first 28 days of life (neonatal deaths) and between the first month and age 5 (post-neonatal under-5 deaths), 2000-2015 (millions)

Note: Because of rounding, numbers in chart may not add up to totals.

To reach the 2030 target, the pace of progress in reducing maternal mortality needs to double


Despite progress, only half of married women in sub-Saharan Africa and Oceania* satisfy their need for family planning with modern methods

Proportion of women aged 15-49, married or in union, who have their need for family planning satisfied through modern methods of contraception, 2000 and 2017 (estimated) (percentage)


In 2015, an estimated 2.1 million people worldwide were newly infected with HIV. This translates to 0.3 new infections per 1,000 uninfected people, a reduction of 46 per cent since 2000. The rate of HIV new infections among children under age 15 declined by 72 per cent between 2000 and 2015 due to the rapid expansion in access to antiretroviral drugs for preventing mother-to-child transmission. In sub-Saharan Africa, the rate of new HIV infections has dropped by 62 per cent since 2000. However, this region continues to have the highest HIV incidence, at 1.5 new infections per 1,000 uninfected people in 2015.

Targeted disease elimination and control programmes have also helped reduce the incidence of other communicable diseases. In 2015, there were 142 new tuberculosis cases per 100,000 people, a decline of 17 per cent since 2000. The global malaria incidence rate in 2015 was 94 per 1,000 people at risk, representing a 41 per cent decrease since 2000. In 2015, 1.6 billion people required mass or individual treatment and care for neglected tropical diseases, a 21 per cent decline from 2010.

Hepatitis deaths are on the rise, but vaccination of infants for hepatitis B is greatly reducing incidence


Untreated chronic viral hepatitis can lead to life-threatening complications. Since 2000, the total number of deaths from hepatitis has increased by 22 per cent, contributing to an estimated 1.34 million deaths in 2015. About 900,000 of these deaths were attributed to hepatitis B virus infections. Greater access to hepatitis testing and treatment is essential to reversing the trend of increasing mortality. In 2015, only 9 per cent of an estimated 257 million persons infected with the hepatitis B virus were diagnosed, and 8 per cent of those diagnosed were on treatment.

An early win in the global response to viral hepatitis was achieved through expanded vaccination coverage. In 2015, 84 per cent of one-year-olds received vaccinations for hepatitis B, compared to 29 per cent in 2000. As a result, the global prevalence of hepatitis B virus infection among children under age 5 was 1.3 per cent in 2015, much lower than the 4.7 per cent found during the pre-vaccination period, which ranges from 1980s to early 2000s.

Number and proportion of deaths attributed to hepatitis viral infections, 2015 (millions and percentage)


Premature deaths from cancer, heart disease, diabetes and chronic respiratory disease are declining, but not rapidly enough to meet the 2030 target


In 2015, an estimated 30 million people worldwide died prematurely (before age 70). More than half of these deaths (56 per cent) were attributed to non-communicable diseases; of these, over three quarters (13 million) were caused by cardiovascular disease, cancer, diabetes or chronic respiratory disease. From 2000 to 2015, the risk of dying between the ages of 30 and 70 from one of these four diseases fell from 23 per cent to 19 per cent. While this represents significant progress, it fell short of the rate needed to meet the 2030 target of a one-third reduction in premature deaths from these four main non-communicable diseases.

People in Oceania excluding Australia and New Zealand are at greatest risk: they had a 34 per cent probability of dying prematurely from one of these four diseases in 2015. Many of these deaths could be prevented through reductions in tobacco use and harmful alcohol consumption, the promotion of healthy diets and physical activity, and universal health coverage.

Probability of dying between age 30 and 70 from cardiovascular disease, cancer, chronic respiratory disease or diabetes, 2000 and 2015 (percentage)

Men are more likely than women to die by suicide

Gender disparities in suicide extend across all regions, with the largest relative gap observed in Europe and Northern America as well as in Latin America and the Caribbean. In these regions, men are almost four times as likely to die by suicide as women. In contrast, the gender gap in in Central and Southern Asia as well as in Eastern and South-Eastern Asia is much smaller, owing to the significantly higher suicide rates among women in those two regions. Worldwide, suicide is one of the leading causes of death for both men and women between the ages of 15 and 29.


Air pollution, whether indoor (household) or outdoor (ambient), increases the risk of cardiovascular disease, stroke, chronic obstructive pulmonary disease, lung cancer and acute respiratory infections. In 2012, household air pollution due to cooking with inefficient fuels and technologies led to an estimated 4.3 million deaths worldwide. Most parts of Asia and sub-Saharan Africa have the highest mortality rate owing to household pollution, at between 68 and 87 deaths per 100,000 people, compared to 60 globally. Exposure to household pollution is particularly high among women and young children, who tend to spend more time indoors and near the stove. In 2012, ambient air pollution from traffic, industry, power generation, waste burning and residential fuel combustion resulted in an estimated 3 million deaths.

Road traffic deaths have increased since 2000, although at a slower pace than the increase in the number of vehicles


Achieving the ambitious Goal 3—to promote health and well-being for all people at all ages—places high demands on the global health workforce and requires substantive and strategic investments. Available data from 2005-2015 reveal that over 40 per cent of all countries have less than one physician per 1,000 people, and around half have fewer than three nurses or midwives per 1,000 people.

An estimated 18 million additional health workers will be needed by 2030 to attain high and effective coverage of the broad range of health services necessary to ensure healthy lives for all. Major shortages of these trained professionals represent a serious concern in almost all countries in sub-Saharan Africa and in more than 90 per cent of the LDCs, where fewer than one physician and three nurses or midwives serve 1,000 people on average. Without targeted interventions, the situation in some of those countries could be further exacerbated by increased labour migration of trained health personnel towards high-income countries with greater demand, thereby undermining already vulnerable health systems.

Note: A country with less than 1 physician and fewer than 3 nurses or midwives per 1,000 people is considered to have an insufficient number of health care professionals. All countries with data in the Europe and Northern America and Australia and New Zealand regions have at least 1 physician and at least 3 nurses or midwives per 1,000 people. Oceania* refers to Oceania excluding Australia and New Zealand.