Goal 10: Reduce inequality within and among countries

Progress in reducing inequality within and among countries has been mixed. Income inequality has declined in many of the countries that experienced sustained economic growth, while increasing in countries with negative growth. Meanwhile, the voices of developing countries in international economic and financial decision-making still need to be strengthened. And, while remittances can be a lifeline for families and communities in the home countries of international migrant workers, the high cost of transferring money continues to diminish the benefits. 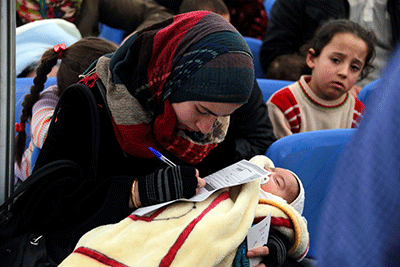 Average annual growth rate of real per capita consumption or income of the bottom 40 per cent of the population and total population, 2011-2015 (latest available) (percentage)


Note: The line included on the graph is a reference line to allow one to easily see whether a country’s growth of the bottom 40 per cent was greater or less than the total population. It is not a trend line.


Voting rights of developing countries have increased in some international organizations, but still fall far below their membership share

Many international organizations and bodies, including the United Nations General Assembly and the World Trade Organization, operate under a one member/one vote system. Others have a more complex decision-making mechanism in place. For example, in both the International Bank for Reconstruction and Development and the International Finance Corporation (both part of the World Bank Group), the voting shares of developing countries remain far below their membership levels and have not increased much over the past 16 years. Other organizations, such as the International Monetary Fund (through its recent quota reform) and the Financial Stability Board, have increased the voting shares of developing countries during this period. However, more work needs to be done to ensure that the voices and participation of developing countries in international economic decision-making, norm-setting and global economic governance are broadened and strengthened.

The proportion of developing countries’ voting rights and membership share in select international organizations, 2000 and 2016 (percentage)

† Data for the Financial Stability Board are from 2010-2016. For this analysis only, developing countries are defined as countries in developing regions according to the M49 classification.


Duty-free treatment and favourable access conditions for exports from least developed and developing countries have expanded. From 2005 to 2015, the proportion of tariff lines globally with duty-free treatment for products originating in developing countries increased from 41 per cent to 50 per cent; for products originating in the least developed countries, the proportion rose from 49 per cent to 65 per cent. These increases indicate that the international community is continuing its efforts to grant preferential treatment to countries with lower income levels.

Proportion of tariff lines applied to exports from least developed and developing countries with zero tariff, 2005, 2010 and 2015 (percentage)


Although the benefits of remittances from international migrant workers are substantial, they are diminished somewhat by the generally high cost of transfer. On average, post offices and money transfer operators charge over 6 per cent of the amount remitted; commercial banks charge 11 per cent; and the global average cost of transferring money is just over 7 per cent, according to World Bank Remittance Prices Worldwide. While the cost of sending money has declined gradually since 2008, all three of these remittance services providers charge significantly more than the 3 per cent target. New and improved technologies, such as prepaid cards and mobile operators, charge lower fees for sending money home (between 2 per cent and 4 per cent), but are not yet widely available or used in many remittance corridors. These new technologies may help reduce the cost of sending remittances to some of the poorest countries, where costs tend to be highest. This is particularly true in sub-Saharan Africa, where average costs absorb about 10 per cent of the amount sent.