Goal 6: Ensure availability and sustainable management of water and sanitation for all

Sustainable water resources are essential to human health, environmental sustainability and economic prosperity. This vital resource is under threat, making it crucial to address the challenges related to water, sanitation and hygiene for populations and water-related ecosystems. Currently, more than 2 billion people are affected by water stress, which will only increase with population growth and the effects of climate change. Achieving universal access to drinking water, sanitation and hygiene and ensuring that services are safely managed remain major challenges, and meeting them are crucial to further progress in health, education and poverty eradication. 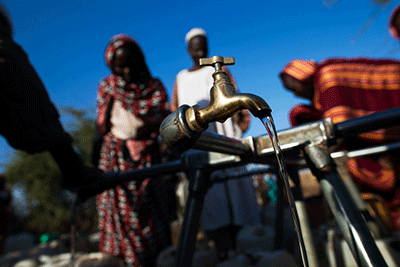 
"Safely managed" drinking water services—an improved water source located on premises, available when needed and free from contamination—represents an ambitious new rung on the ladder used to track progress on drinking water during the SDG period. This new approach reveals that, in 2015, 5.2 billion people used a “safely managed” drinking water service, while 1.3 billion others used a “basic” service, defined as an improved water source not more than 30 minutes away (round-trip collection time). Another 263 million people spent over 30 minutes collecting water from an improved source and were therefore classified as having a “limited” service. In most countries, the burden of collecting water falls mainly on women and girls.

Based on comparable data from 70 countries in 2015, hygiene coverage, defined as the availability of a handwashing facility with soap and water on premises, varied widely across regions. In the 34 sub-Saharan Africa countries with data, less than 20 per cent of the population on average had a facility with soap and water at home in 2015. In the 14 countries with data in Latin America and the Caribbean, hygiene coverage was greater than 75 per cent on average.

Proportion of the population with basic handwashing facilities, 2015 (percentage)

Note: Based on data for 70 countries.


Open defecation, practised by 892 million people (12 per cent of the global population) in 2015, continues to pose a serious health risk. It contributes to the incidence of diarrhoea and to the spread of intestinal parasites, which makes children more vulnerable to malnutrition. Open defecation can lead to water pollution. Moreover, it exposes girls and women to the danger of physical attacks. Ending open defecation and achieving universal access to basic sanitation services by 2030 will require a substantial acceleration of progress, particularly in Southern Asia and sub-Saharan Africa. Nine out of 10 people who practised open defecation in 2015 lived in rural areas.

Note: Rest of the World includes Australia and New Zealand, Europe and Northern America and Oceania*.


More than 2 billion people globally are affected by water stress, which occurs when the ratio of fresh water withdrawn to total renewable freshwater resources is above a 25 per cent threshold. The situation will likely worsen as populations grow and the effects of climate change intensify. Northern Africa and Western Asia, as well as Central and Southern Asia, experience water stress levels above 60 per cent, indicating the strong probability of future water scarcity, particularly in specific sub-regions or seasons of the year. Primary sectors for water use in a country include agriculture, industry and municipalities. Agriculture accounts for almost 70 per cent of global water withdrawals, a figure that rises to 95 per cent in some developing countries. This poses a significant challenge for sustainable development, especially since agricultural production is projected to increase significantly to meet global food needs. Protecting water and using it more efficiently will therefore be critical for producing food as well as in all sectors.

Level of water stress: freshwater withdrawal as a proportion of available freshwater sources, around 2014 (percentage)


Official development assistance (ODA) to the water sector includes aid for drinking water supplies, sanitation and hygiene, as well as aid in other areas, including agricultural water resources, flood protection, and hydroelectric power. ODA disbursements to the water sector reached 8.6 billion US dollars in 2015, representing an increase of 64 per cent in real terms since 2005. Sub-Saharan Africa accounted for 31 per cent of global water- and sanitation-related ODA disbursements in 2015, more than doubling in the past 10 years. However, since 2005, ODA to the water sector has remained relatively constant as a proportion of total ODA disbursements at about 5 per cent. Countries are making steady progress in achieving increased access to drinking water, sanitation and hygiene services. However, critical to achieving Goal 6 by 2030 will be obtaining adequate financial resources—whether by attracting new sources or better utilizing existing resources.