The pace of urban growth has been unprecedented. Around the turn of the century, for the first time in history, urban dwellers outnumbered their rural counterparts, and by 2015, nearly 4 billion people—54 per cent of the world’s population—lived in cities. That number is projected to reach 5 billion by 2030. Rapid urbanization brings enormous challenges, including growing numbers of slum dwellers, increased air pollution, inadequate basic services and infrastructure, and unplanned urban sprawl—which also make cities more vulnerable to disasters. With sound urban planning and management, however, the world’s urban spaces can become inclusive, safe, resilient and sustainable, as well as dynamic hubs of innovation and enterprise. 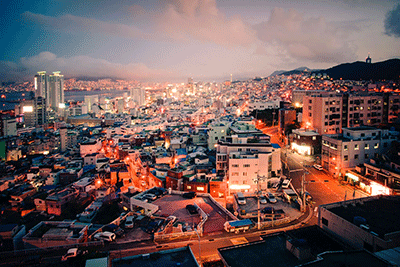 The proportion of urban populations living in slums has declined by 20 per cent since 2000, but their numbers continue to grow

People living in slums, informal settlements or inadequate housing are triply disadvantaged: they tend to be excluded—spatially, socially and economically—from the opportunities that other city dwellers enjoy. Over the years, policy and programmatic responses by national and municipal governments, international development partners, and non-governmental and community-based organizations have resulted in improved slum conditions. The proportion of the urban population living in slums worldwide fell from 28 per cent in 2000 to 23 per cent in 2014.

Despite these gains, the absolute number of slum dwellers has continued to grow owing to accelerating urbanization, population growth and lack of appropriate land and housing policies. In 2014, an estimated 880 million urban residents lived in slums, compared to 792 million in 2000. Substandard living conditions and the lack of basic services hit children and youth the hardest, diminishing their prospects for good health and education, with potentially lifelong consequences for their cognitive and social development. Slums are most pervasive in sub-Saharan Africa, where more than half (56 per cent) of urban dwellers live in slum conditions.

Proportion of urban population living in slums, 2000 and 2014 (percentage)


The expansion of urban land is outpacing urban population growth

As larger numbers of people move to urban areas, city boundaries typically expand to accommodate new inhabitants. Understanding the relationship between population shifts and urban land can help policymakers and planners ensure that cities remain economically productive and environmentally sustainable. From 2000 to 2015, in all regions of the world, the expansion of urban land outpaced the growth of urban populations—that is, the average ratio of the land consumption rate to the population growth rate was greater than one. The ratio increased from 1.22 between 1990 and 2000 to 1.28 between 2000 and 2015. This means that cities are becoming less dense as they grow, with unplanned urban sprawl negatively affecting the sustainability of urban development.

Proper management of solid waste—through waste reduction, reuse, recycling and composting, incineration or disposal in landfills—is a basic component of sustainable cities. When left uncollected or improperly managed, solid waste can end up blocking drains or festering in open dump sites, resulting in a host of unsanitary conditions. As cities and their populations expand, so does their urban waste, though quantitative estimates remain challenging. According to data from cities in 101 countries from 2009 to 2013, approximately 65 per cent of the population is served by municipal waste collection. The lowest coverage was found in sub-Saharan Africa and Central and Southern Asia, at around 40 per cent. In many cities in these regions, open dumping remains a common practice.

Proportion of the population served by municipal waste collection, 2009-2013 (percentage)


Note: Information in chart is based on data from cities in 101 countries. Oceania* refers to Oceania excluding Australia and New Zealand.


In most cities around the world, polluted air is an unavoidable and major health hazard

Polluted air threatens the health of most city dwellers around the world. In 2014, nine out of 10 people living in urban areas did not breathe clean air, according to modelled data derived from satellite estimates and ground-level measurements in 3,000 cities in 103 countries. Clean air, in this case, refers to air that meets the annual World Health Organization (WHO) air quality guidelines value for particulate matter (PM2.5) of 10 micrograms per cubic metre. Striking differences are found among regions: in Australia and New Zealand, for example, 100 per cent of city dwellers breathed clean air versus 50 per cent and 40 per cent, respectively, of urban populations in Oceania excluding Australia and New Zealand, and in Europe and Northern America. In contrast, none of the urban areas in sub-Saharan African countries or in Asian countries met the world air quality guidelines in 2014.

Proportion of the urban population living in areas that meet the annual WHO air quality guideline value for particulate matter of a diameter less than 2.5 micrometres (PM2.5), 2014 (percentage)


National urban policies provide structure and organization to the often-haphazard process of urbanization. As such, these policies have been identified as key to the implementation of the SDGs. With input from regional and local levels, a national urban policy or regional development plan can ensure coordinated efforts among all levels of government and provide the best opportunity for sustainable urbanization. At the same time, these policies and plans promote stronger connections between urban, peri-urban and rural areas by linking sectorial policies that affect national, regional and local governments. As of May 2017, 149 countries (or 77 per cent) had fully or partially implemented national-level urban policies, most of which are aligned with priority areas identified in the SDGs.

Proportion of countries in various stages of implementing a national urban policy, 2017 (percentage)


Note: Information in chart is based on data from 193 countries.