A stronger commitment to partnership and cooperation is needed to achieve the SDGs. Attaining the Goals will require coherent policies, an enabling environment for sustainable development at all levels and by all actors, and a reinvigorated Global Partnership for Sustainable Development. Towards this end, United Nations Member States have identified the following areas as critical: resource mobilization, technology, capacity-building, trade, policy and institutional coherence, multi-stakeholder partnerships, and data, monitoring and accountability. Meeting the means of implementation targets is key to realizing the Agenda for Sustainable Development, as is the full implementation of the Addis Ababa Action Agenda. Incremental progress has been made in these areas, but more is needed. 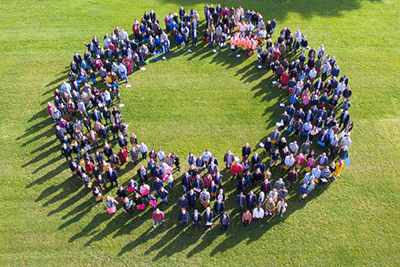 
In 2016, net official development assistance (ODA) from member countries of the OECD-DAC rose by 8.9 per cent in real terms to 142.6 billion US dollars, reaching a new peak. ODA as a percentage of member countries’ gross national income (GNI) was 0.32 per cent, up from 0.30 per cent in 2015. A rise in aid spent on refugees in donor countries boosted the total. Even without refugee costs taken into account, aid rose 7.1 per cent. In 2016, Germany joined five other countries— Denmark, Luxembourg, Norway, Sweden and the United Kingdom— in meeting the United Nations target for ODA of 0.7 per cent of GNI.

Despite this progress, 2016 data show that bilateral (country-tocountry) aid to LDCs fell by 3.9 per cent in real terms from 2015. Aid to Africa fell by 0.5 per cent as some DAC members backtracked on a commitment to reverse past declines in flows to the poorest countries. ODA spent on hosting refugees inside donor countries jumped by 27.5 per cent in real terms from 2015 to reach 15.4 billion US dollars. The DAC is working to adjust ODA reporting rules to help ensure that funding for development is not diverted to in-donor refugee costs.


For a decade, starting in 2000, debt service as a proportion of exports of goods and services declined significantly for low- and lower-middle-income countries. Increased export earnings, enhanced debt management and attractive borrowing conditions in international markets contributed to this improvement. Outright debt relief also eased the burden for countries eligible for the Heavily Indebted Poor Country Initiative: 36 out of 39 countries received debt relief of around 136 billion US dollars from official creditors.

Debt service as a proportion of total exports of goods and services, 2000 and 2015 (percentage)


In 2016, remittances to developing countries fell for a second consecutive year


Remittances sent by international migrants to their home countries in the form of personal transfers and compensation of employees have a profound impact on individual families, communities and countries. In 2016, international remittances totalled 575 billion US dollars, 75 per cent of which (429 billion US dollars) went to developing countries, according to the latest estimates. However, remittances to developing countries in 2016 fell for a second consecutive year, declining by 2.4 per cent over 2015. Low oil prices and weak economic growth in the Gulf Cooperation Council countries and the Russian Federation are taking a toll on remittance flows to Central and Southern Asia, while weak growth in Europe has reduced flows to Northern and sub-Saharan Africa. The contribution of remittances to the income of countries has been growing significantly over the last 15 years and exceeded 4 per cent of GDP for LDCs in 2015.

Volume of remittances (in US dollars) as a proportion of total GDP, 2000 and 2015 (percentage)


Note: 2000 figures for Northern Africa and Western Asia and Oceania* are not available. Oceania* refers to Oceania excluding Australia and New Zealand.


Fixed-broadband services remain largely unaffordable and unavailable across large segments of the developing world. In 2016, fixed-broadband penetration reached 30 per cent in developed countries, but only 8.2 per cent and 0.8 per cent in developing regions and LDCs, respectively. In the developed regions, about 80 per cent of the population are online, compared to 40 per cent in developing regions and 15 per cent in LDCs. Although Internet use in LDCs has tripled over the last five years, the percentage of users today reaches the level enjoyed by developed countries in 1998. However, the LDC average hides large disparities, with some countries doing much better than others. In 2016, levels of Internet use worldwide were 12 per cent lower for women than for men; the gender gap remains even larger in LDCs at 31 per cent. Both globally and in LDCs, this gender gap has widened in recent years.


Over the past 15 years, developing regions have represented a growing share of international trade, with their world merchandise exports increasing from 31 per cent in 2001 to 45 per cent in 2015. Moreover, developing regions overall have maintained a trade surplus vis-à-vis the rest of the world. However, the share in world merchandise exports from LDCs decreased from 1.1 per cent to 0.9 per cent between 2011 and 2015. Much of this change can be attributed to a fall in commodity prices, since exports from many LDCs are concentrated in primary commodities, such as minerals, ores and fuels. On the other hand, the share of LDCs in world services exports increased from 0.5 per cent to 0.8 per cent from 2001 to 2015.


In 2016, 125 countries engaged in country-led monitoring of development effectiveness, demonstrating their commitment to strengthening SDG implementation and multi-stakeholder partnerships. Of these countries, 54 reported overall progress towards those commitments. For instance, countries reported progress in recording development cooperation on national budgets submitted for parliamentary oversight, and in tracking budget allocations for gender equality and women’s empowerment.

Countries’ own results frameworks were used to identify 83 per cent of new interventions supported by donor countries in 2016. Fifty-seven per cent of results indicators in these new interventions were drawn from country-led results frameworks and about half (51 per cent) used data from national monitoring systems to track results. The extent to which development partners use country-led results frameworks is one indication of the respect accorded to a country’s policy “space” and its leadership in establishing its own path towards sustainable development.

Extent of use of country-owned results frameworks and planning tools by providers of development cooperation, 2015 (percentage)


More than half of the countries or areas for which information is available (81 out of 154) were implementing national statistical plans in 2016. Among the 17 countries with fully funded plans, 11 are located in Europe and Northern America. Such plans lay out the strategy by which a country can develop statistical capacity throughout its entire national statistical system. By designing, implementing and monitoring this strategic vision, countries can better respond to the growing demand for high-quality, timely, disaggregated and accessible data.

Only 37 out of 83 countries or areas with relevant information had national statistical legislation in place that complied with all 10 Fundamental Principles of Official Statistics. Solid and politically backed statistical legislation is required to ensure that the Fundamental Principles and other professional and scientific standards are being followed in the production of official statistics.

Number and proportion of countries with a national statistical plan that is fully funded and under implementation, 2016 (percentage)


While the population and housing census remains a key data source, 25 countries failed to conduct one in the period 2007-2016


Population and housing censuses are a primary source of disaggregated data needed to formulate, implement and monitor development policies and programmes. During the period from 2007 to 2016, 89 per cent of countries or areas around the world conducted at least one population and housing census. Owing to a variety of factors, 25 countries or areas failed to conduct a census over the same period. These included financial constraints, technical difficulties encountered in their preparation, natural disasters, and political and social instability. Among these countries or areas, nine were in sub-Saharan Africa and seven were in Northern Africa and Western Asia.


Complete birth and death registration is far from universal, especially in sub-Saharan Africa