Investing in infrastructure, promoting inclusive and sustainable industrialization, and supporting technological development, research and innovation are three driving forces for economic growth and sustainable development. These drivers can help countries reduce poverty by creating job opportunities, stimulating growth, and encouraging the building and improvement of physical facilities that are essential to the functioning of business and society. In recent years, steady improvements have been made in all three of these areas of sustainable development. However, renewed investment will be needed in the least developed countries (LDCs) to build infrastructure and ensure the doubling of industry’s share of GDP in those countries by 2030. 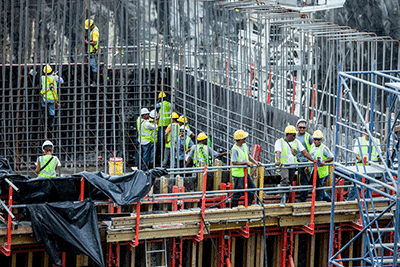 Transportation services provide a vital link to global markets, but are still lacking in some regions

Efficient transportation services drive economic development. In 2015, the global economic impact (both direct and indirect) of air transport was estimated at 2.7 trillion US dollars, or 3.5 per cent of global GDP. Road transport continues to be the predominant form of freight transport globally, accounting for 61 per cent of the total. Europe and Northern America, and Eastern and South-Eastern Asia account for most freight transport (all modes), with Oceania excluding Australia and New Zealand and sub-Saharan Africa accounting for only a small fraction of the global total. Passenger transport follows a similar pattern. The LDCs, landlocked developing countries and small island developing States represent far less air travel and freight volumes, with each country group accounting for only 1 per cent to 2.7 per cent of the global total.

Despite progress, the least developed countries are still far behind in manufacturing growth


Manufacturing is the principal engine of economic growth that satisfies the growing demand for goods worldwide. Manufacturing output has increased in most regions of the world, and manufacturing value added (MVA) per capita increased globally by 22.6 per cent in real terms between 2005 and 2016. But while MVA per capita has increased globally, broader industrialization has been hampered by intense concentrations of production in some countries and regions. This has resulted in marked inequalities, with industrial productivity varying widely between richer and poorer regions. In 2016, MVA per capita was 100 US dollars a year in LDCs (although it had increased 59 per cent in real terms since 2005), compared to 4,621 US dollars in Europe and Northern America. As manufacturing production shifts from higher-income regions in search of lower costs, countries that currently have low levels of MVA per capita stand to benefit.


Manufacturing is consistently improving its emissions performance as countries move to less energy-intensive industries, cleaner fuels and technologies, and stronger energy efficiency policies. Emissions levels have also been reduced through structural changes and product diversification in manufacturing. Between 2000 and 2014, almost all regions showed a reduction in carbon dioxide (CO2) emissions from manufacturing per unit of MVA. Europe and Northern America reduced their emissions intensity by 36 per cent over this period, and all of the 10 largest manufacturing countries saw decreases. These promising trends are not reflected in the global emissions intensity level, however, since a significant share of global MVA has moved to countries with poorer emissions performance.

Global investments in research and development continue their brisk growth, though large disparities persist among regions


In 2014, global investments in research and development (R&D) stood at 1.8 trillion US dollars (purchasing power parity), up from 733 billion US dollars in 2000. This represented an average annual growth rate of 4.5 per cent. In relative terms, 1.7 per cent of global GDP was devoted to R&D. However, this figure masks wide differences among regions: In Europe and Northern America, the average stood at 2.2 per cent of GDP, while in sub-Saharan Africa, the share was only 0.4 per cent. A large proportion of R&D expenditures go towards the wages and salaries of researchers, technicians and support staff, which is why the figures for researchers follow a similar pattern. Globally, there were almost 1,098 researchers per million inhabitants in 2014, ranging from a low of 63 in LDCs to a high of 3,500 in Europe and Northern America.

Research and development expenditure as a proportion of GDP, 2000 and 2014 (percentage)


Note: There is insufficient data coverage for Oceania* to calculate a regional aggregate.

Coverage by a mobile cellular signal has become almost universal

Mobile cellular services have spread much faster than anticipated, enabling people living in previously unconnected areas to join the global information society. By 2016, second-generation (2G) mobile telephony was almost universal, with 95 per cent of the world’s population covered. Third-generation (3G) mobile coverage, which delivers higher speed access to the Internet and information and communication technology services and applications, stood at 84 per cent globally. In LDCs, about 85 per cent of people lived in areas covered by a mobile cellular signal and 52 per cent lived in areas covered by a 3G signal.

Number of people covered by a mobile network, by technology, 2007-2016 (billions)


Note:LTE (Long-Term Evolution) is a standard for high-speed wireless communication that allows for faster speeds than 3G technologies but does not meet the technical criteria of a 4G wireless service.