Goal 14: Conserve and sustainably use the oceans, seas and marine resources for sustainable development

Oceans cover almost three quarters of the planet, comprising the largest ecosystem on Earth. Large coastal populations in every region depend on them for their livelihoods and prosperity. Oceans also provide priceless environmental services: they generate half the oxygen we breathe, support a wealth of marine resources and act as a climate regulator. Yet despite their critical importance, the mounting impacts of climate change (including ocean acidification), overfishing and marine pollution are jeopardizing progress in protecting the world’s oceans. Small island developing States are the most threatened. Due to the transboundary nature of oceans, marine resource management requires interventions at all levels (national, regional and global) to mitigate threats. 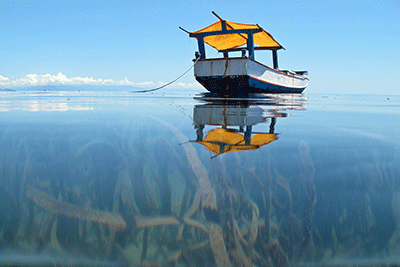 When effectively managed and well-resourced, marine protected areas are important mechanisms for safeguarding ocean life. In 2017, protected areas cover 13.2 per cent of the marine environment under national jurisdiction (up to 200 nautical miles from shore), 0.25 per cent of the marine environment beyond national jurisdiction, and 5.3 per cent of the total global ocean area. Globally, marine protected areas have expanded substantially since 2000, when only 1.7 per cent of global marine areas were protected. This growth is due to the creation of new sites, expansion of existing sites and contributions of several large-scale additions. Much of the increase over the last few years was due to these large additional sites, particularly off the coasts of Australia, Chile, New Zealand, Palau and the United States, among others.

To achieve the desired long-term benefits of protecting nature, these protected areas must safeguard important sites for biodiversity. An example of such areas is key biodiversity areas (KBAs). Globally, the average coverage of marine KBAs by protected areas has risen from 32 per cent in 2000 to 45 per cent in 2017, an increase of more than 40 per cent. Coverage of marine KBAs by protected areas is highest in Australia and New Zealand (69 per cent) and Europe and Northern America (57 per cent). It is lowest in the small island developing States (22 per cent) and Northern Africa and Western Asia (23 per cent).


Average proportion of each important site (KBA) for marine biodiversity that is covered by protected areas, 2000 and 2017 (percentage)


Note: Figures for each region are calculated as the proportion of each KBA covered by protected areas, averaged across all KBAs within the region. Oceania* refers to Oceania excluding Australia and New Zealand.


Overfishing threatens about one third of the world’s fish stocks


Fisheries are a source of food and livelihoods for billions of people around the globe. However, they are also extremely vulnerable to environmental degradation, climate change and overfishing. If fisheries are not managed sustainably and are overfished, food production declines, the functioning of ecosystems is impaired, and biodiversity is compromised. The proportion of world marine fish stocks that have been overfished—that is, are at biologically unsustainable levels—increased from 10 per cent in 1974 to 31 per cent in 2013. However, the trend has slowed and appears to have stabilized between 2008 and 2013. Of the 10 most productive species in marine capture fisheries production in 2013, most were fully fished, while some stocks were considered overfished. For example, Atlantic cod is considered overfished in the Northwest Atlantic; 41 per cent of principal tuna species have been placed in the same category. Overfished stocks require strict management plans to rebuild stock abundance to their full and biologically sustainable levels of productivity.

Oceans absorb up to 30 per cent of the annual emissions of CO2 generated by human activity, helping mitigate the rise in greenhouse gases. However, this benefit comes at a steep ecological cost: the absorbed CO2 alters the carbonate chemistry of the waters, leading to an increase in the acidity of seawater (reduced pH) and a decrease of the aragonite saturation state. These changing conditions can lead to significant weakening of the shells and skeletons of many marine species (such as reef-building corals and shelled molluscs, which use aragonite to build their shells). These effects threaten the resilience of marine ecosystems, particularly corals, and could potentially put the marine food web at risk.

Studies at open ocean and coastal sites around that world have revealed that current levels of marine acidity have increased on average by about 26 per cent since the start of the Industrial Revolution (pH reduction of 0.1) and that marine life is exposed to conditions outside previously experienced natural variability at all study locations around the world. In some regions, the changes are amplified by natural processes such as upwelling (often cold, CO2 and nutrient-rich water from the deep sea rising towards the surface), resulting in conditions outside biologically relevant thresholds.

As atmospheric CO2 levels increase, estimates indicate that oceans could be nearly 150 per cent more acidic by 2100, resulting in a pH reduction of up to 0.4. While the magnitude of carbon input is important, more stressful is the speed at which ocean acidification is occurring—faster than at any time since the last ice age. It could take tens of thousands of years for the ocean pH to return to conditions established before industrialization. Without sufficient time to buffer the consequences of ocean acidification, the severity and speed of change increase the risks for ocean health.


Without concerted action, coastal eutrophication will increase in one fifth of large marine ecosystems by 2050

Global trends point to continued deterioration of coastal waters due to pollution and eutrophication (excessive nutrients in water, frequently due to runoff from land, causing dense plant growth and the death of animal life from lack of oxygen). Large urban populations and intensive agricultural production or livestock are often associated with coastal eutrophication. Of the 63 large marine ecosystems evaluated under the Transboundary Water Assessment Programme, 16 per cent are in the “high” or “highest” risk categories for coastal eutrophication, particularly from sewage and agriculture. They are primarily located off the coasts of Western Europe and Southern and Eastern Asia, and in the Gulf of Mexico. Most major marine ecosystems are still considered in the “lowest” or “low” risk category. By 2050, however, it is estimated that coastal eutrophication will increase in 21 per cent of these large ecosystems. To tackle these risks, nutrient inputs need to be reduced through sewage treatment and initiatives addressing agricultural practices.