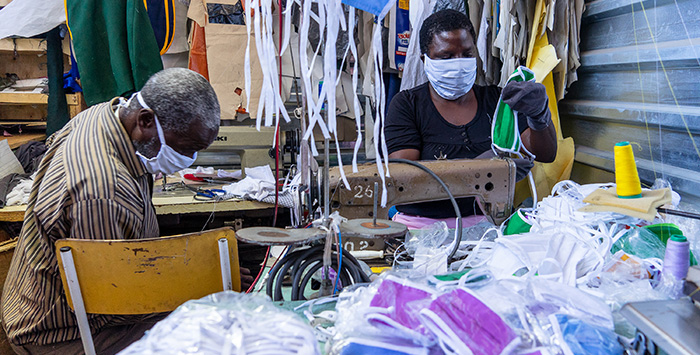 Due to tariffs and trade tensions between the world’s dominant economies, global manufacturing growth was already in decline before the COVID-19 pandemic. When it struck, the movement of people and goods was restricted, disrupting global value chains, as well as the global manufacturing and transport industries. Small-scale industries in particular have been severely affected. The lack of resilient infrastructure, information and communication technologies, and basic services limits a country’s ability to perform and adjust to shocks. For the global community to achieve Goal 9, industrialization, improvements in infrastructure, and the promotion of technological innovation by increasing investment in research and development are key. The development and production of vaccines against COVID-19 in record time is one example of the power of technological innovation, which has given the world cause for hope.

The year 2020 was catastrophic for air travel demand. Air passengers dropped from 4.5 billion globally in 2019 to 1.8 billion in 2020, a 60 per cent decline. As a result, jobs supported by the air transport industry fell by 52.5 per cent over the course of 2020 – from 87.7 million to 41.7 million. Airline financial losses are projected at $371 billion in 2020, with an extra $115 billion and $13 billion in losses for airports and air navigation services providers, respectively.

A constantly changing list of open- and closed-destination countries has added a level of uncertainty. Air transport is not projected to get back to pre-pandemic levels until 2024. Governments should coordinate and do what they can to bolster the air transport industry to restore lost jobs and get the global economy back on track.

In the first half of 2020, world manufacturing suffered a severe slump triggered by global lockdowns. However, by the third and fourth quarters of that year, most economies showed signs of recovery, led mainly by medium- and high-tech manufacturing. During the fourth quarter of 2020, these industries registered growth of nearly 4 per cent compared with the same period in 2019. This growth was fuelled by the rise in demand for computer electronics due to a global shift towards working from home, remote-learning and e-commerce. Global manufacturing of low-tech products saw negative growth in the last quarter of 2020 (-1.8 per cent).

Growth rate of global manufacturing production compared with the same quarter the previous year, by technological intensity, first quarter of 2018 to the last quarter of 2020 (percentage)

The importance of investing in research and development (R&D) has never been more apparent. The rapid development of COVID-19 vaccines demonstrates the critical role of innovation in unexpected crises. Global investment in R&D reached $2.2 trillion (purchasing power parity) in 2018, up from $1.4 trillion in 2010. As a result, the proportion of global GDP invested in R&D increased from 1.61 per cent in 2010 to 1.73 per cent in 2018. The number of researchers per million inhabitants worldwide jumped from 1,022 in 2010 to 1,235 in 2018.

The pandemic is not the only crisis the world is facing, and it will not be the last. Policy commitments towards financing for R&D, especially in developing economies, need to continue and be strengthened. Most developing regions fell short of the world average. Spending on R&D as a share of GDP ranged from 0.37 per cent in sub-Saharan Africa to 0.86 per cent in Northern Africa and Western Asia. For LDCs and landlocked developing countries, the average was 0.20 per cent. This is only a small fraction of the proportion spent in more developed regions.

Research and development expenditure as a proportion of GDP, 2010 and 2018 (percentage)

Small-scale industries have been severely affected by the pandemic, and many continue to face existential challenges. According to establishment-level surveys conducted from 2006 to 2020, almost one in three small industrial enterprises benefit from a loan or line of credit. Access to credit remains uneven across countries and regions of the world. Countries in sub-Saharan Africa and LDCs suffer the most from a lack of credit: approximately one in six small-scale industries in these countries have a loan or line of credit, compared with almost half in Latin America and the Caribbean.

Although some Governments have responded to the pandemic with economic support measures – transferring cash to businesses, delaying loan payments or refinancing loans to more favourable terms – policymakers in LDCs and emerging economies have far less leverage to provide such measures. In a post-pandemic world, access to finance will play an essential role in economic recovery.

Vast swathes of the global population are still unable to connect, either through rural roads or cyberspace

Rural road connectivity provides farmers and their families easy access to markets, along with health and education facilities. This helps reduce poverty by elevating agricultural productivity, business profitability and employment. Rural access index data – measuring the proportion of people within two kilometres of an all-season road – from 25 countries mostly developing countries for 2018 to 2019 indicate that almost 300 million out of 520 million rural dwellers lack good access to roads.

In 2020, almost the entire world population lived within range of mobile networks, with 85 per cent covered by a fourth-generation (4G) network. Between 2015 and 2020, global 4G coverage doubled. However, “coverage” does not necessarily mean “usage”: only 51 per cent of the population used the Internet in 2019, leaving 3.7 billion people without Internet access. In LDCs, only one in five people were online in 2020, failing to achieve the target of universal and affordable Internet access.