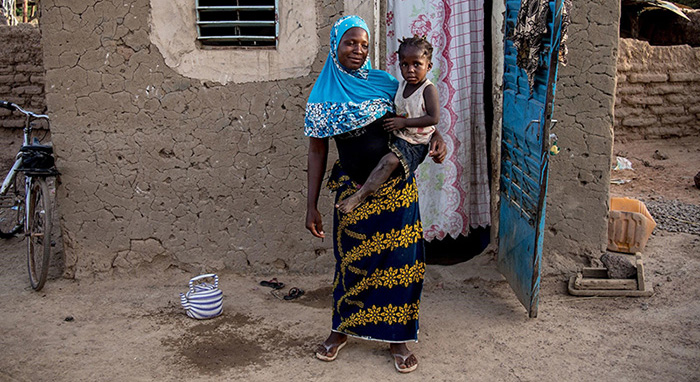 The Alimata family live in the Centre region of Burkina Faso. The parents work 103 hours a week to pay for food. Their one-room home has no electricity or toilet, and they spend 3.5 hours a week collecting water. They use charcoal and wood as fuel for their stove.

The effects of the coronavirus disease 2019 (COVID-19) pandemic have reversed much of the progress made in reducing poverty, with global extreme poverty rising in 2020 for the first time since the Asian financial crisis of the late 1990s. Even before COVID-19, the world was not on track to achieve the goal of ending poverty by 2030, and without immediate and significant action, it will remain beyond reach. The crisis has demonstrated more clearly than ever the importance of disaster preparedness and robust social protection systems. While the number of countries with disaster risk reduction strategies has increased substantially, and many temporary social protection measures have been put in place in response to the pandemic, increased efforts are needed on both fronts to ensure the most vulnerable are protected.

Before the COVID-19 pandemic, the share of the world’s population living in extreme poverty fell from 10.1 per cent in 2015 to 9.3 per cent in 2017. This means that the number of people living on less than $1.90 per day dropped from 741 million to 689 million. However, the rate of reduction had slowed to less than half a percentage point annually between 2015 and 2017, compared with one percentage point annually between 1990 and 2015.

The pandemic has compounded the threats to progress raised by conflict and climate change. Estimates suggest that 2020 saw an increase of between 119 million and 124 million global poor, of whom 60 per cent are in Southern Asia. Nowcasts point to the first rise in the extreme poverty rate since 1998, from 8.4 per cent in 2019 to 9.5 per cent in 2020, undoing the progress made since 2016. The impacts of the pandemic will not be short-lived. Based on current projections, the global poverty rate is expected to be 7 per cent (around 600 million people) in 2030, missing the target of eradicating poverty. 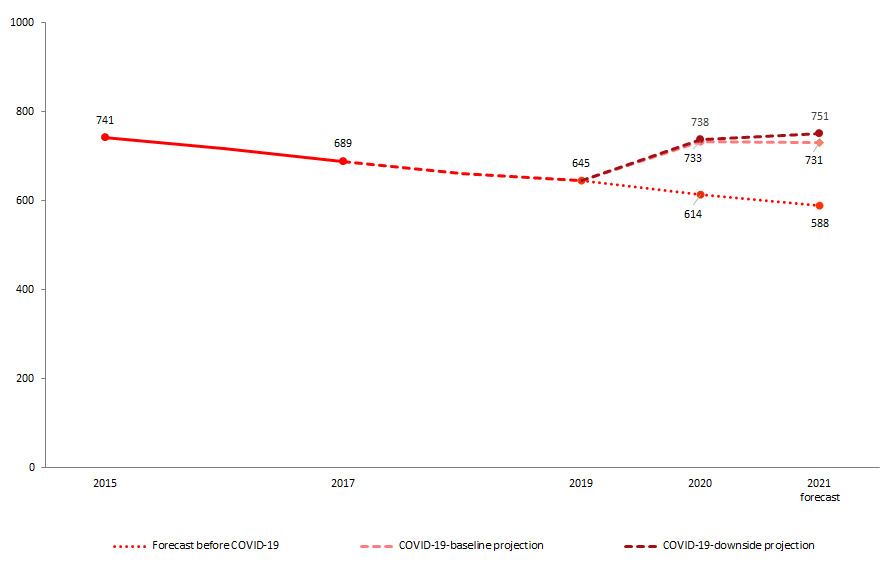 Working poverty disproportionately affects women and youth, and the pandemic is likely to magnify those disparities

The share of the world’s workers living in extreme poverty fell by more than half from 2010 to 2019 – from 14 per cent to 6.6 per cent. However, lockdowns and related public health measures due to COVID-19 have severely affected the informal economy, where the vast majority of the working poor are employed. The related income losses threaten to roll back global progress on reducing working poverty.

Although the gender gap in working poverty globally has narrowed over the years, a substantial gap persists in many parts of the world, particularly in the least developed countries (LDCs). There, one third (33.5 per cent) of employed women were living in poverty in 2019, compared with 28.3 per cent of employed men. Worldwide, young workers are twice as likely to be living in poverty as adults, reflecting lower earnings and poorer quality jobs. Since the COVID-19 crisis has had a disproportionate impact on the livelihoods of women and young people, it is likely to exacerbate these longstanding disparities.

Proportion of employed population living below $1.90 a day, 2019 (percentage) 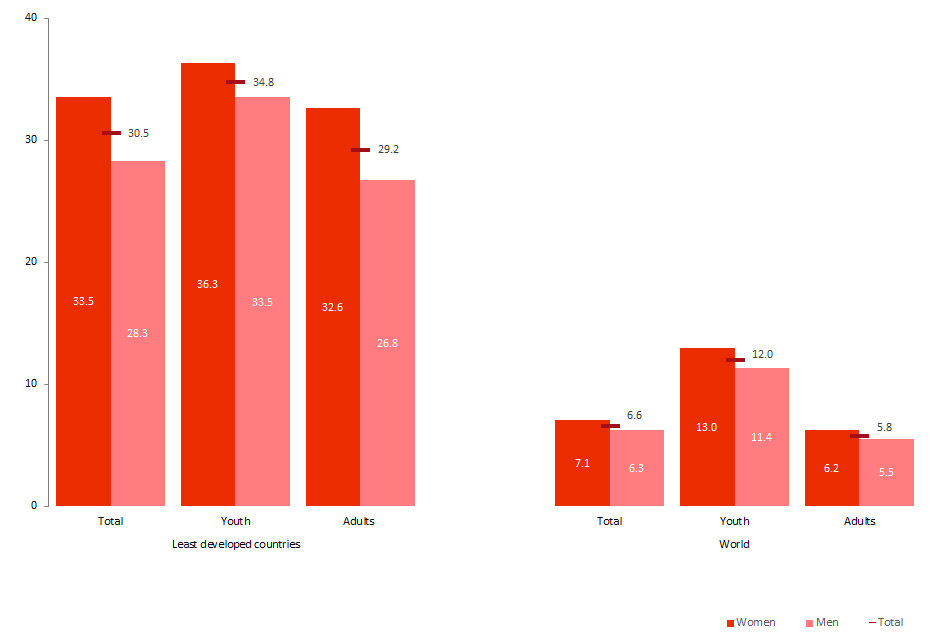 Governments have put new social protection measures in place, but most are only temporary

Social protection measures are fundamental to preventing and reducing poverty across the life cycle. Nevertheless, by 2020, only 46.9 per cent of the global population were effectively covered by at least one social protection cash benefit, leaving as many as 4 billion people without a social safety net. The COVID-19 crisis has demonstrated the importance of social protection systems to protect people’s health, jobs and incomes, as well as the consequences of high coverage gaps. As a result, many new social protection measures were introduced in 2020: between 1 February and 31 December, the Governments of 209 countries and territories announced more than 1,600 such measures in response to the crisis, but almost all (94.7 per cent) were short term in nature.

Proportion of total population effectively covered by at least one social protection benefit and vulnerable persons covered by social assistance, by income-level of country, 2020 or latest available year (percentage)

Disasters and their immediate impacts threaten to reverse development gains and slow poverty reduction and hunger alleviation. Based on the latest reporting under the Sendai Framework monitoring process, direct economic losses of $70.4 billion due to disasters were reported by 53 countries for 2019, of which 60 per cent ($42.5 billion) were recorded in the agricultural sector.

In 2019, over 24,000 deaths were attributed to disasters in 67 countries. This is a substantial reduction from 2018, when disaster mortality peaked at 126,000 (reported by 79 countries), and is consistent with an overall trend of declining mortality since 2005. However, COVID-19 is already reversing this progress, overwhelming health systems and highlighting underlying socioeconomic vulnerabilities to biological hazards.

The adoption and implementation of robust multi-hazard disaster risk reduction strategies, which incorporate biological risks such as COVID-19, are critical. As of April 2020, 120 countries reported that they had developed and adopted national and/or local disaster risk reduction strategies, up from 48 during the Sendai Framework’s nascent period in 2015.