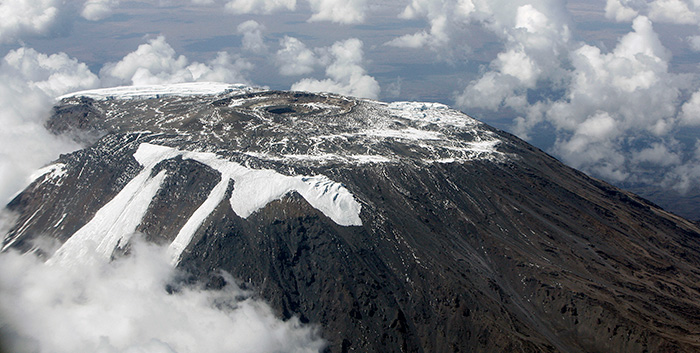 An aerial view of disappearing ice at the summit of Mount Kilimanjaro in the United Republic of Tanzania.

Despite a pandemic-related economic slowdown, the climate crisis continues largely unabated. A temporary reduction in human activities resulted in a dip in emissions. However, concentrations of greenhouse gases continued to increase in 2020, reaching new record highs. It was one of the three warmest years on record, with the global average temperature about 1.2°C above the 1850–1900 baseline. The world remains woefully off track in meeting the Paris Agreement target of limiting global warming to 1.5°C above pre-industrial levels and reaching net-zero carbon dioxide CO2 emissions globally by 2050.

In the face of looming catastrophe, climate action is gaining momentum. In June 2020, the Race to Zero campaign was launched to form a coalition of businesses, cities, regions and investors around net-zero carbon emission initiatives, and set out specific near-term tipping points for more than 20 sectors of the global economy. As of December 2020, over two thirds of the world’s GDP was being generated in places with actual or intended “net zero by 2050” targets, covering over half of the world’s population and emissions.

The global pandemic has laid bare humanity’s vulnerabilities. It has shown the world how much damage can be wreaked by a crisis that pales in comparison to a full-scale climate emergency. We must heed this wake-up call and seize the opportunity to rebuild in a way that will reduce emissions and increase resilience to climate change.

In 2015, 196 Parties to the Paris Agreement committed to transforming their development trajectories towards sustainability and called for limiting global warming to well below 2°C – ideally 1.5°C – above pre-industrial levels. To meet these goals, global carbon dioxide emissions need to be reduced by 45 per cent by 2030 from 2010 levels, and reach net-zero emissions by 2050. Greenhouse gas concentrations reached new highs in 2020, with globally averaged mole fractions of CO2 exceeding 410 parts per million.

The COVID-19 pandemic significantly reduced human activities in 2020, leading to a temporary fall in CO2emissions. Developed countries saw the steepest declines, averaging drops of almost 10 per cent, while emissions from developing countries fell by 4 per cent relative to 2019. Despite the temporary reduction in emissions overall in 2020, real-time data from specific locations, including Mauna Loa, United States, and Cape Grim, Tasmania, indicate that concentration levels of CO2, methane and nitrous oxide continued to increase in 2020. By December 2020, emissions had fully rebounded and registered 2 per cent higher than the same month in 2019. As the world recovers from the pandemic, emissions are expected to rise further unless critical steps are taken to shift economies towards carbon neutrality.

Notwithstanding a global pandemic, countries are advancing climate action, with a focus on adaptation

The voluntary efforts countries are making to reduce national emissions and adapt to the impacts of climate change are described in their nationally determined contributions (NDCs). Each Party to the Paris Agreement is requested to prepare, communicate and maintain successive NDCs that it intends to achieve. As of May 2021, 192 Parties had submitted their first NDCs to the Framework Convention on Climate Change secretariat. Moreover, as of December 2020, 48 of them were submitted as new or updated NDCs, representing 75 Parties and accounting for 30 per cent of global greenhouse gas emissions in 2017. Adaptation information was included in 39 of these 48 new or updated NDCs. Countries are articulating more quantified targets and indicators for adaptation, and identifying links between adaptation, the Sustainable Development Goals and other frameworks. The highest-priority areas for adaptation identified in the NDCs are: food security and production, terrestrial and wetland ecosystems, freshwater resources, human health, and key economic sectors and services.

An increasing number of countries are also prioritizing the formulation and implementation of national adaptation plans to boost their efforts to adjust to a changing climate. These include building flood defences, setting up early warning systems for cyclones, or switching to drought-resistant crops. As of May 2021, 125 of 154 developing countries were in the process of formulating and implementing national adaptation plans, and 22 countries have submitted their plans to the Framework Convention on Climate Change secretariat. Developed countries are stepping up their efforts to provide technical guidance and support to LDCs – which are particularly vulnerable to the effects of climate change –to develop and carry out such plans.

DespiThe global transition to a low-emission, climate-resilient future is backed up by increasing financial support

Climate finance provided by developed to developing countries continues to increase, reflecting an ongoing commitment to support the global transition to a low-emission and climate-resilient future. Total climate finance reported by Annex I Parties to the Paris Agreement reached an annual average of $48.7 billion in 2017–2018. This represents an increase of 10 per cent over 2015–2016. While over half of all climate-specific financial support for 2017–2018 was targeted at mitigation, the share of adaptation support is growing, and many countries are prioritizing adaptation in their provision of financial support.

Two thirds of financial support provided in 2017–2018 (equivalent to an annual average of $32.3 billion) flowed through bilateral, regional and other channels, while the remaining third was channelled through multilateral institutions and funds, such as the Green Climate Fund (GCF). Support for the formulation of national adaptation plans through the GCF Readiness Programme is steadily increasing in all regions and groups. Eleven developing countries have submitted 23 project proposals to the GCF, of which 7 – totalling $464 million – have been approved.

In 2017–2018, climate-specific support constituted the largest share of total climate finance ($36.2 billion). The share of core/general support (financial support provided to multilateral and bilateral institutions that is not considered climate-specific) has been decreasing over time, from over 40 per cent of the total in 2011–2012 to roughly 25 per cent in 2017–2018.

Total financial support provided, as reported by Annex I Parties to the Framework Convention on Climate Change secretariat, 2011–2018 (billions of dollars)