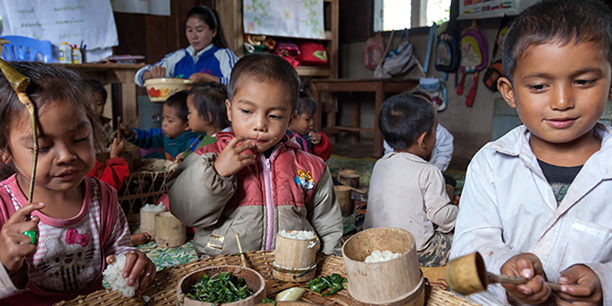 Students in the Lao People’s Democratic Republic get at least one third of their daily energy and nutrition needs filled through a national school feeding programme. In poor rural areas, parents farm early in the morning and often don’t have time to prepare school lunches for their children.

Just prior to the COVID‑19 pandemic, 650 million people were going hungry, and some 2 billion people were suffering from food insecurity – figures that had been rising since 2014. The crisis has posed additional threats to global food security and nutrition. Disrupted food supply chains and economic slowdowns have affected food systems worldwide and threatened people’s access to food, making the target of ending hunger even more distant. COVID‑19 is expected to exacerbate all forms of malnutrition, particularly in children, due to a loss of household income, a lack of available and affordable nutritious food, reduced physical activity and disruptions in essential nutrition services. Even discounting the effects of COVID‑19, around 230 million children suffer from malnutrition. Urgent short-term actions are needed to avert rising hunger, and a transformation of food systems is required to achieve a healthy and sustainable food future for all.

COVID-19 has had a further and profound impact on hunger and food security, triggered by disruptions in food supply chains, income losses, widening social inequities, an altered food environment and price hikes. Between 720 and 811 million people in the world faced hunger in 2020, an increase of as many as 161 million from 2019.

The prevalence of undernourishment increased from 8.4 per cent in 2019 to 9.9 per cent in 2020. Hunger affects 21.0 per cent of the population in Africa, compared with 9.0 per cent in Asia and 9.1 per cent in Latin America and the Caribbean. More than half of the world’s undernourished are found in Asia (418 million) and more than one-third in Africa (282 million).

Achieving food security goes beyond the eradication of hunger. Nearly one in three people in the world (2.37 billion) were affected by moderate or severe food insecurity in 2020, an increase of almost 320 million from 2019. Such levels indicate that people are unable to eat a healthy, balanced diet on a regular basis, or that they run out of food and, at worst, go a day or days without eating. The highest levels of food insecurity were found in sub-Saharan Africa (66.2 per cent), while prevalence rose fastest in Latin America and Caribbean – from 24.9 per cent in 2014 to 40.9 per cent in 2020. The prevalence of moderate or severe food insecurity being 10 per cent higher among women than men in 2020, compared with 6 per cent in 2019.

Number and proportion of undernourished people in the world, 2005–2019 (millions and percentage) 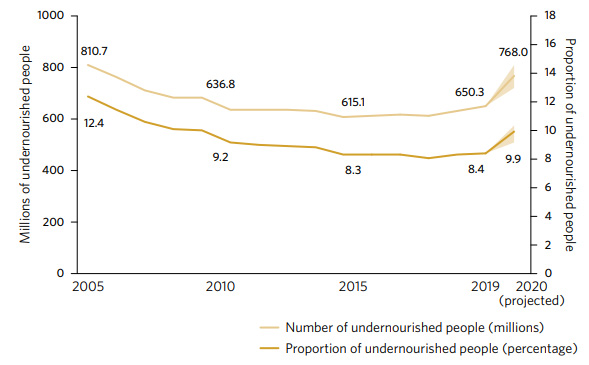 Small-scale farmers are disadvantaged on many fronts, especially if they are women

Small-scale food producers constitute the majority of food producers in the 37 countries surveyed; in some countries, they account for up to 91 per cent. Strengthening the resilience and adaptability of these small farmers is critical to reversing the trend towards rising hunger and reducing the share of people living in extreme poverty. Data from 11 countries show that the average labour productivity of small-scale food producers is lower than that of large-scale producers. Moreover, large-scale producers earn two to three times the annual income of small farmers. In almost all countries surveyed, households headed by men achieve higher labour productivity and earn a larger annual income than those headed by women. For example, in Bangladesh, households headed by women earn on average only half of the agricultural income of households headed by men, whereas in Bulgaria, the difference is threefold.

Pandemic-related shocks are likely to trigger a rise in stunting, which already affects more than one in five children

Children are considered stunted, or chronically malnourished, when they are too short for their age. In 2020,1 22 per cent of children under age 5 worldwide (149.2 million) suffered from stunting. This proportion is down from 33.1 per cent in 2000 and 24.4 per cent in 2015. These figures are based on the latest estimates, but the actual number of children affected is likely to be higher due to continued constraints in accessing nutritious diets and essential nutrition services during the pandemic. The full impact of the crisis on childhood stunting could take years to manifest.

The three regions with the highest stunting prevalence were Oceania (excluding Australia and New Zealand) at 41.4 per cent, sub-Saharan Africa (32.3 per cent) and Central and Southern Asia (29.8 per cent). The latter two regions accounted for nearly three quarters of all stunted children globally. Particular attention needs to be focused on these regions since the pandemic is affecting the most vulnerable children disproportionately.

Proportion of children under age 5 who are affected by stunting, 2000 and 20201 (percentage) 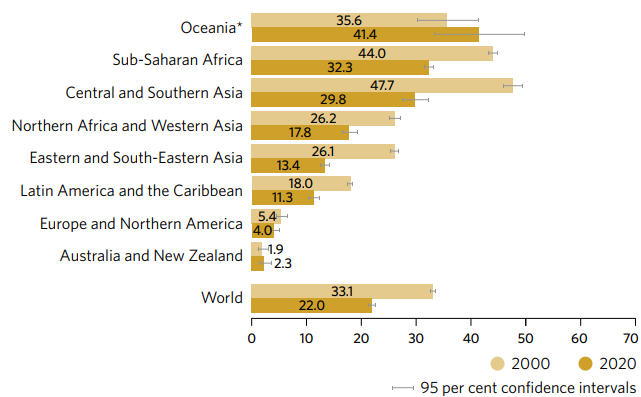 Childhood wasting and overweight are now at alarming levels, and are likely to get worse due to COVID-19

Wasting is a life-threatening form of malnutrition, measured by low weight for height. In 2020,1 wasting affected an estimated 45.4 million children under age 5 (6.7 per cent); overweight affected 38.9 million children in the same age group (5.7 per cent). Wasting will be one of the conditions most affected by COVID-19 in the short term. Around 15 per cent more children than estimated may have suffered from wasting in 2020, due to deterioration in household wealth and disruptions in the availability and affordability of nutritious food and essential nutrition services.

Overweight in children may also rise in some countries where unhealthy food replaced fresh, nutritious food, and movement restrictions limited opportunities for physical activity for long periods of time. Childhood wasting and overweight coexist in many developing regions at alarmingly high levels. For example, in Oceania (excluding Australia and New Zealand), wasting prevalence was 9.0 per cent while overweight prevalence was 8.0 per cent.

Prevalence of overweight and wasting among children under age 5, 20201 (percentage)

With little progress to show over the last 20 years, almost a third of women of reproductive age are still anaemic

Anaemia is a condition in which the concentration of haemoglobin is insufficient to meet the body’s physiologic needs. In pregnant women, it increases the risk of adverse outcomes for both mother and baby. It may also be an independent risk factor for severe illness from COVID-19. In 2019, the global prevalence of anaemia was 29.9 per cent in women of reproductive age (over half a billion women), 29.6 per cent in non-pregnant women and 36.5 per cent in pregnant women. Almost half of women aged 15 to 49 in Central and Southern Asia suffer from anaemia. Since 2000, the prevalence of this condition globally in women of reproductive age has been stagnant. The disruption of health services and food systems, coupled with economic downturns caused by the pandemic, may worsen prevalence. Multisectoral efforts and interventions are needed to optimize anaemia-reduction efforts and close the gaps in achieving the global target of reducing anaemia in women of reproductive age by 50 per cent by 2030. 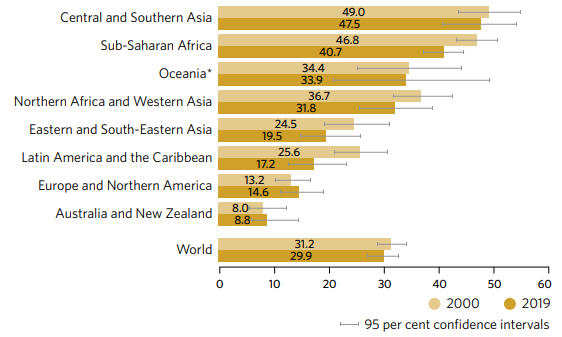