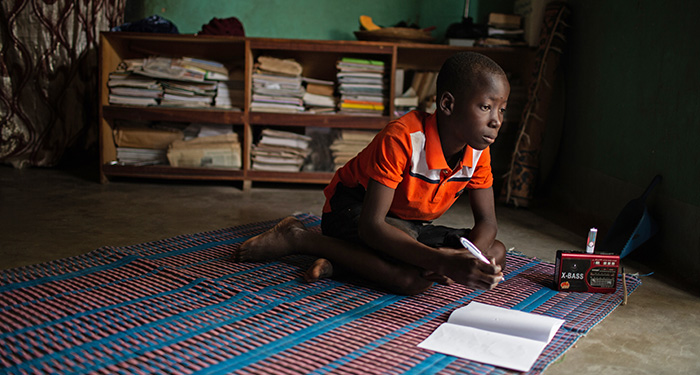 A boy learns through a Radio Education in Emergencies programme. For two years, starting in mid-2017, more than 9,200 schools closed across eight African countries due to rising insecurity, leaving 1.9 million children without education.

COVID‑19 has wreaked havoc worldwide on children’s learning and well-being. Before the pandemic, progress in education was already too slow to achieve Goal 4 by 2030. One year into the crisis, two in three students were still affected by full or partial school closures. One hundred million more children than before fail to demonstrate basic reading skills. The poorest and most vulnerable children are bearing the brunt of the crisis, exacerbating longstanding inequalities. Many risk never returning to school; some are forced into child marriage or child labour. Special efforts are required to recover learning losses caused by COVID-19. However, an estimated 65 per cent of Governments in low- and lower-middle-income countries, and 35 per cent in upper-middle- and high-income countries have reduced funding for education since the onset of the pandemic.

Even before COVID-19, the world was not on track to meet reading and mathematics targets. In 2019, only 59 per cent of children of grade three age were proficient in reading. The pandemic is projected to cause an additional 101 million children (roughly 9 per cent of those in primary and lower secondary school) to fall below the minimum reading proficiency threshold, increasing the total number of students falling behind to 584 million in 2020. This wipes out the progress achieved in education over the past 20 years. Similar declines are observed in the area of mathematics.

Nearly two thirds of the children falling behind live in Central and Southern Asia and Eastern and South-Eastern Asia. The proficiency rate was already very low in sub-Saharan Africa before the pandemic, so learning losses in this region would likely occur among children below the minimum level of proficiency. Recovery of the learning deficit globally could occur by 2024, but only if extraordinary efforts are made.

Change in reading proficiency for grades one to eight, from 2019 to 2020 (percentage and millions of children) 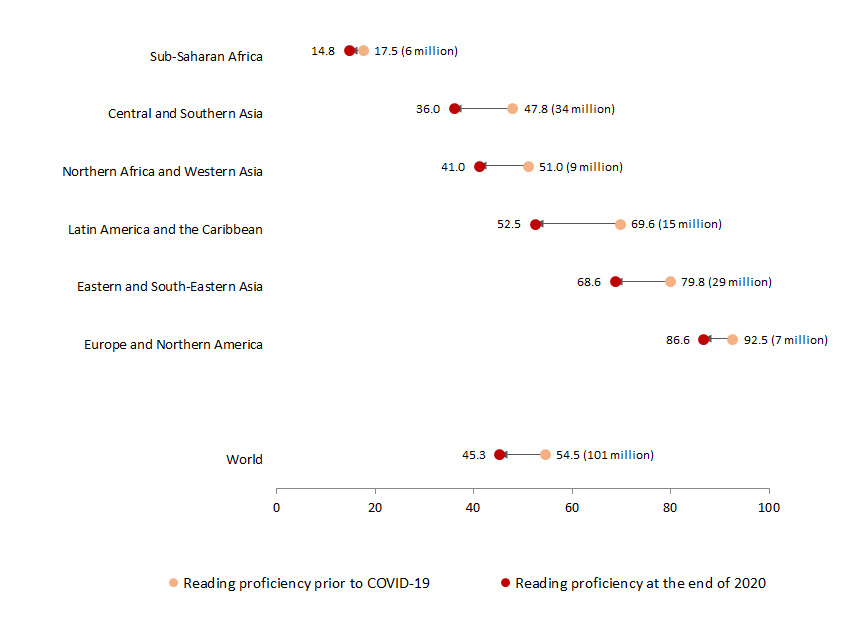 Note: Values in parentheses represent the number of children falling below the proficiency threshold in 2020.

Large disparities in school completion are likely to get worse, especially among poor or vulnerable children

Large disparities among population groups remain pervasive. Almost half of countries with data did not reach gender parity in primary school completion. Disparities by location and wealth are even more stark: only a third of countries reached parity in primary school completion between rural and urban students, and just one sixth of countries reached parity between students in the poorest and richest households. The pandemic is expected to further slow or even reverse progress in education completion. Growing poverty and the shift to remote learning make children from the poorest households and other vulnerable groups less equipped to participate and more likely to drop out permanently or for extended periods.

Pre-COVID-19 data for 2012–2020 drawn from 76 mostly low- and middle-income countries and territories show that around 7 in 10 children aged 3 and 4 years are developmentally on track. Participation in organized pre-primary learning (one year before the official age for primary school entry) rose steadily before the pandemic, from 65 per cent in 2010 to 73 per cent in 2019, with gender parity achieved in every region. However, considerable variation was found among regions. Participation in early learning in 2019 was 43 per cent in sub-Saharan Africa, compared with 96 per cent in Latin American and the Caribbean. This progress has been threatened since 2020, since childcare and early education facilities have closed in most countries. Many young children are now entirely reliant on their parents or other caregivers at home. Unsafe conditions, negative interactions with caregivers, and lack of adequate stimulation and learning opportunities during the early years can diminish children’s chances of success throughout their lives.

Participation rate in organized learning one year before the official entry age for primary school, 2010 and 2019 (percentage)


Note: Data for Southern Asia and 2010 data for Oceania* and Eastern and South-Eastern Asia are not shown due to low population coverage of available data.

Continuing education and training are key to improved livelihoods and to developing a labour force resilient to economic shocks and adaptable to technological change. Prior to the pandemic, the average participation rate of youth and adults in formal and non-formal education was only 25 per cent, with significant variation across the 73 countries with data. In nearly half of them, participation rates were below 10 per cent, but were 40 per cent and above among countries in Europe and Northern America. Gender parity in participation rates was achieved in less than a fifth of the countries.

With schools and workspaces transitioning online due to COVID-19, information and communication (ICT) skills have become critically important. However, available data from 2017–2019 indicate that less than 40 per cent of youth and adults reported performing one of the basic ICT skills in the last three months, such as sending an email with an attachment. Large differences in skill levels are found among various groups and occupations, but relatively smaller gender differences, especially at younger ages. 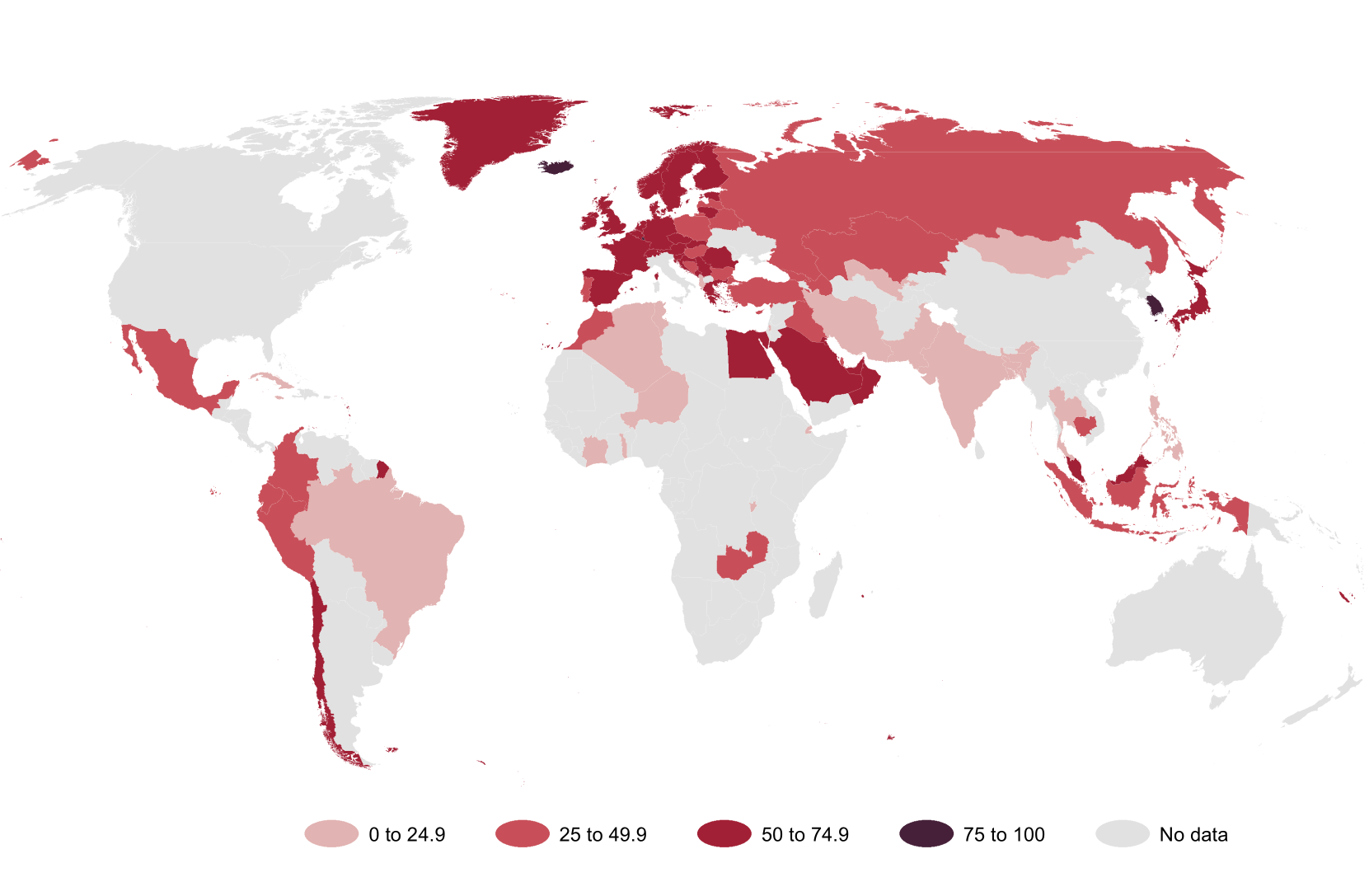 Building back better from the crisis can start with basic school infrastructure, which is sorely lacking in many countries

Improving basic school infrastructure is critical for school reopening, a first step on the road to recovery from COVID-19. Data from 2016 to 2019 show that, globally, more than a fifth of primary schools lacked access to basic drinking water or single-sex toilets, more than a third lacked basic handwashing facilities, and one in four did not have electricity. Internet service and computers in schools are even more scarce. Schools in LDCs face the biggest challenges. Almost half of primary schools in LDCs lack single-sex toilets—an important factor in girls’ attendance—and more than two thirds are without electricity. The pandemic is spotlighting the importance of adequate sanitation facilities in keeping children safe at school and the need for ICT infrastructure to support remote learning. It is also highlighting additional infrastructure considerations, such as adequate classroom space, air filtration in school buildings, and access to the Internet and computers at home. The economic fallout of the crisis on education budgets and capital spending is likely to affect the ability of countries to make progress towards these ends, especially in the poorest countries.