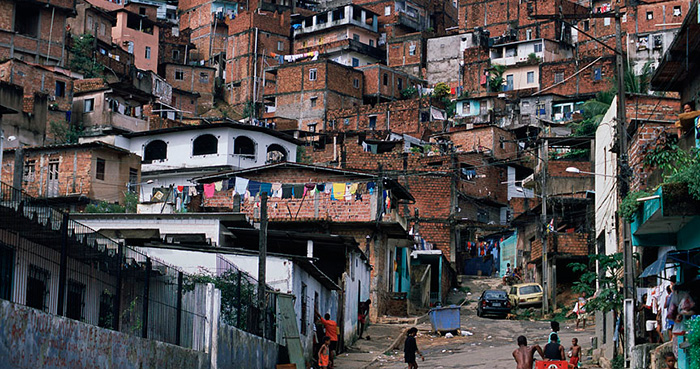 A favela, or slum, rises on the outskirts of Salvador de Bahia, Brazil.

Cities in many countries have become epicentres of COVID-19, exposing their vulnerabilities stemming from lack of adequate and affordable housing, insufficient public health systems, and inadequate urban infrastructure such as water, sanitation and waste services, public transport and open public spaces. Deeply rooted inequalities have led to disproportionate pandemic-related impacts on migrants, the homeless, and those living in urban slums and informal settlements. That said, in responding to the crisis, some cities have emerged as engines of economic recovery, centres of innovation and catalysts for social and economic transformation. Recovery from the pandemic offers the opportunity to rethink and reimagine urban areas as hubs of sustainable and inclusive growth.

The pandemic has only worsened the plight of slum dwellers, further marginalizing those already vulnerable

Between 2014 and 2018, the proportion of the urban population living in slums worldwide increased from 23 per cent to 24 per cent, translating to over 1 billion slum dwellers. Slum dwellers are most prevalent in three regions: Eastern and South-Eastern Asia (370 million), sub-Saharan Africa (238 million) and Central and Southern Asia (226 million). The needs and concerns of these people are rarely taken into account in conventional urban planning, financing and policymaking, leaving an enormous segment of the global population behind.

The pandemic has disproportionately affected low-income households and those working in the informal sector. This has further increased the number of slum dwellers and those whose living conditions have deteriorated, making them even more vulnerable. Without concerted action on the part of Governments at all levels, in collaboration with civil society and development partners, the number of slum dwellers will continue to rise in most developing countries.

Proportion of the urban population living in slums in selected regions, 2018 (percentage)

The pandemic has drawn attention to the need for safe, accessible and reliable public transport

Poorly planned and managed urbanization translates to a disconnect between the provision of infrastructure and residential concentrations, leading to inadequate networks of streets and a lack of reliable transport systems. This diminishes the potential of cities to leverage economies of scale and agglomeration. Only about half of the world’s population live within 500 metres walking distance of low-capacity transport systems (such as buses or trams) and within 1,000 metres of high-capacity systems (such as trains and ferries), according to 2019 data from 610 cities in 95 countries.

Access to public transport was significantly disrupted during the pandemic – from partial closures and guidelines on reduced capacities to total network closures. As the pandemic response continues, countries and cities need to provide options for accessible, safe, reliable and sustainable public transport systems. Such systems should be well-integrated with walking and cycling paths through long-term policies, sustainable urban mobility plans and targeted investments.


Note: Based on data from 610 cities: 28 in Australia and New Zealand, 94 in Central and Southern Asia, 102 in Eastern and South-Eastern Asia, 63 in Latin America and the Caribbean, 97 in Europe and Northern America, 85 in sub-Saharan Africa, and 141 in Northern Africa and Western Asia.

Any future response to the pandemic and other health-related risks require an urgent rethinking of urban spaces. At the centre of this reconfiguration are open public spaces, particularly streets and recreational areas. Adequate provision of streets, for example, also caters to pedestrians and cyclists and, combined with mixed developments, enhances the use of non-motorized transport. This is not only healthy for residents but can also reduce COVID-19 risks through less congested public transport systems.

The share of the global urban area allocated to streets and open public spaces averages about 16 per cent, according to data from a sample of 911 cities from 114 countries in 2020. This is well below the UN-Habitat recommendation of 30 per cent streets and an additional 10 to 15 per cent open public spaces. The task of doubling the current shares of land to streets and open spaces may be an uphill battle at the start. However, the pandemic has reminded us that such long-term changes and adjustments can reduce risks while promoting healthier, more liveable cities.

Countries are increasingly adopting national urban policies, which are key to managing pandemic-related and other risks

National urban polices are a coherent set of guidelines developed in a collaborative way with all stakeholders that promote transformative, productive, inclusive, equitable and environmentally resilient urban development over the long term. When implemented well, such policies can successfully tackle the multidimensional and far-reaching challenges of urbanization. They do so in part by ensuring sectoral, territorial and jurisdictional integration and coordination.

Countries around the world are increasingly adopting national urban policies. As of March 2021, 156 countries had developed such policies. Almost half of these countries were already in the implementation stage, 40 per cent were in the early stages of developing policies, and 12 per cent were monitoring and evaluating how well these policies were functioning. The stages of national urban policy development vary by region. In Europe and Northern America, Latin America, and Eastern and South-Eastern Asia, at least three quarters of national urban policies are under implementation. Conversely, Oceania (excluding Australia and New Zealand) and Northern Africa and Western Asia are far behind, with about 60 per cent of urban policies still in the early stages of development, including feasibility, diagnosis and formulation.

With COVID-19 disproportionately affecting urban areas, updates to existing national urban policies are urgently required. The objective is to redesign urban configurations to prepare for, respond to and build resilience to current and future risks.