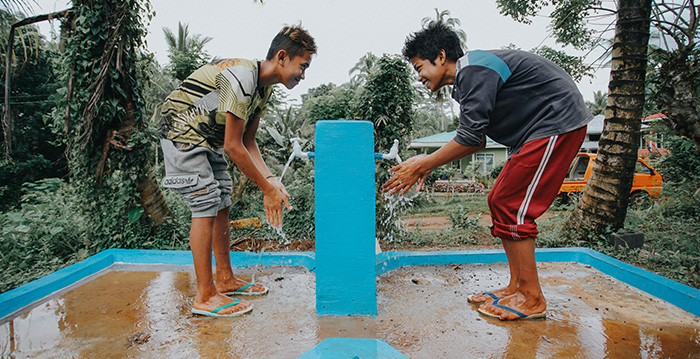 Over 100 households and 1,600 schoolchildren now have better access to safe water in South Upi, Maguindanao, Philippines, thanks to a joint project by the International Labour Organization and the Government of Japan.

Billions of people around the globe live without safely managed drinking water, sanitation and hygiene services. COVID-19 has underscored the need for universal access to these services to combat the pandemic and promote a healthy, green and sustainable recovery.
Water is required across all sectors of society to produce food, energy, goods and services. Over the last century, global water use has increased at more than twice the rate of population growth. Many water sources are drying up, becoming more polluted or both. In addition to water stress and water pollution, countries are facing growing challenges linked to degraded water-related ecosystems, water scarcity caused by climate change, underinvestment in water and sanitation, and insufficient cooperation on transboundary waters. The world is not on track to achieve Goal 6. A dramatic acceleration in current rates of progress and integrated and holistic approaches to water management are badly needed.

Universal access to drinking water, sanitation and hygiene is fundamental to the COVID-19 response

Universal access to water, sanitation and hygiene services goes well beyond household use. Globally, only two in three schools had basic drinking water and sanitation services, and three in five schools had basic hygiene services in 2019. This means that 818 million children lacked basic handwashing facilities at their schools at the start of the COVID-19 pandemic. In least developed countries, only one in two health-care facilities had basic water services, two in five had basic sanitation services, and three in four had basic hygiene services in 2019. To ensure that we build back better from the COVID-19 crisis, Governments will need to accelerate their efforts to ensure access to drinking water, sanitation and hygiene for all.

When a country or territory withdraws 25 per cent or more of its renewable freshwater resources, it is water stressed. This challenge affects countries on every continent. In 2018, 2.3 billion people lived in water-stressed countries, of whom 721 million lived in countries with high or critical levels. Between 2015 and 2018, water stress in some subregions with already high or very high levels, such as Northern Africa, Central Asia and Western Asia, increased by over 2 per cent.

Levels of water stress (freshwater withdrawal as a proportion of available freshwater resources), regions with high and very high water stress, 2015 and 2018 (percentage)


Freshwater ecosystems are changing dramatically, signalling the need for an urgent response

Water-related ecosystems play a fundamental ecological role and provide essential products and services. That said, freshwater ecosystems are changing dramatically. One fifth of the world's river basins are experiencing either rapid increases or decreases in surface water area. Globally, lake water quality is poor: of the 2,300 large lakes assessed in 2019, nearly a quarter recorded high to extreme turbidity (water cloudiness). High turbidity can adversely impact human and ecosystem health. An assessment of 10 per cent of the world’s large lakes in 2019 showed that at least 21 million people, including 5 million children, live within a 5-kilometre radius of lakes with high turbidity.

Natural wetlands around the world are in long-term decline. More than 80 per cent are estimated to have been lost since the pre-industrial era. Between 1970 and 2015, inland and marine/coastal wetlands each shrank by approximately 35 per cent, three times the rate of forest loss. The area covered by coastal mangroves declined globally by 4.9 per cent between 1996 and 2016. Efforts to protect and restore water-related ecosystems must be urgently scaled up and accelerated. 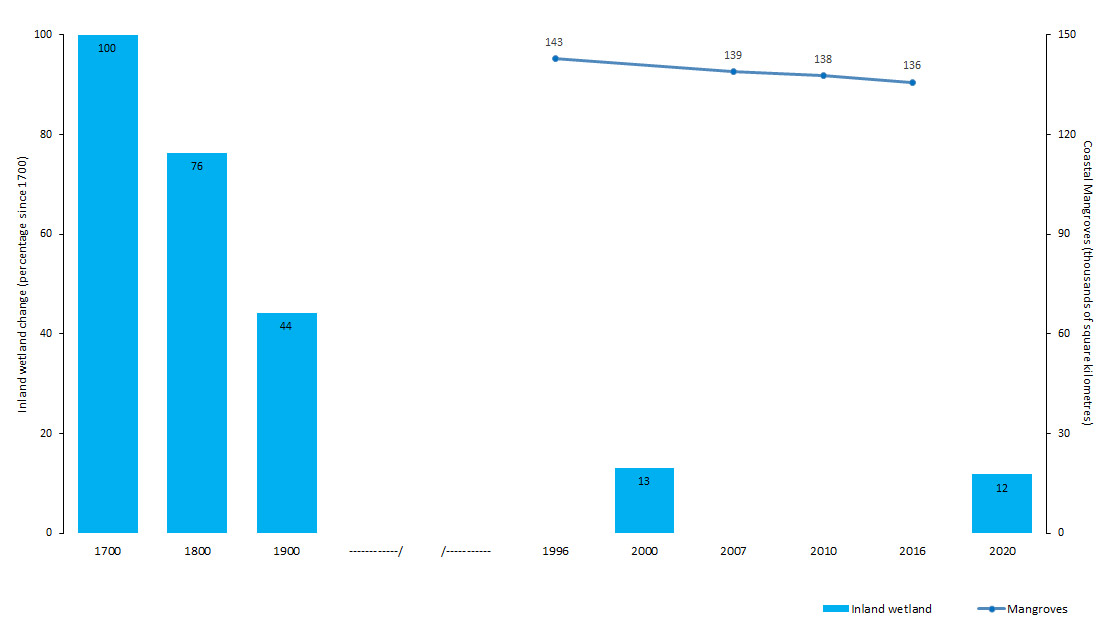 Transboundary water cooperation is crucial to encouraging regional integration, promoting peace and sustainable development, tackling regional security challenges and supporting climate change adaptation. Globally, 153 countries share rivers, lakes and aquifers. However, only 24 countries had all of their transboundary basin area covered by operational arrangements in 2020; 22 countries had more than 70 per cent covered. On average, 58 per cent of transboundary basin areas have an operational arrangement for water cooperation. Europe and Northern America and sub-Saharan Africa show the greatest coverage.

In 2020, despite the COVID-19 pandemic, 128 out of 153 countries sharing transboundary basins submitted national reports on the status of their cooperative arrangements. More efforts are needed to accelerate progress so that all transboundary rivers, lakes and aquifers are covered by operational agreements by 2030.

Countries are lagging in the implementation of integrated management of water resources, central to a sustainable future

To balance competing demands for water, many countries have strengthened water laws, developed relevant policies and reinforced institutions. Globally, the average implementation rate for the integrated management of water resources increased from 49 per cent in 2017 to 54 per cent in 2020. The current rate of progress needs to double, as 129 countries are not on track to achieve sustainable management of water resources by 2030. To accelerate progress, countries must build on their multi-stakeholder monitoring processes to understand major barriers and identify priority actions. In many countries, COVID‑19 has actually led to wider stakeholder engagement in water resources management through online consultations. Some of the most common priorities include establishing sustainable financing mechanisms, and improving management and monitoring of basins and aquifers on the basis of hydrological – rather than administrative – boundaries.