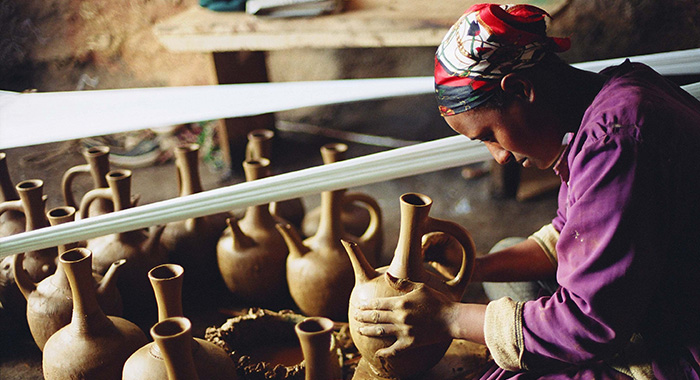 A self-employed worker with a hearing impairment earns an income through the production of clay pots in Addis Ababa, Ethiopia.

Even before the pandemic hit, global economic growth had slowed. The COVID-19 crisis disrupted economic activities around the world and caused the worst recession since the Great Depression. In 2020, 8.8 per cent of global working hours were lost (relative to the fourth quarter of 2019), equivalent to 255 million full-time jobs – about four times the number lost during the global financial crisis in 2009. The pandemic has put workers in informal employment at risk, as they lack protection against illness or lockdowns. Young workers and women have been particularly affected by the crisis. With the roll-out of COVID-19 vaccines and continued fiscal and monetary support, the United States of America and China are expected to experience strong growth in 2021. However, for many other countries, economic growth will remain below pre-pandemic trends for a prolonged period.

For many countries, the road to economic recovery may be a long, bumpy ride

The global economy grew by an average of about 2 per cent from 2014 to 2018. In 2019, real gross domestic product (GDP) per capita increased by only 1.3 per cent globally and is estimated to have decreased by 4.6 per cent in 2020. With the roll-out of vaccines and government aid, a global economic recovery is under way, led by China and the United States. Global GDP per capita is projected to increase by 4.3 per cent in 2021 and 3.1 per cent in 2022. However, for many countries, economic growth is not expected to return to pre-pandemic levels until 2022 or 2023.

For LDCs, real GDP increased by 4.8 per cent in 2019 and is expected to have decreased by 0.3 per cent in 2020 due to pandemic disruption. In 2021 and 2022, real GDP growth in LDCs is projected to pick up again – reaching 4.0 and 5.0 per cent, respectively. However, it is expected to remain well below the 7 per cent target envisioned by the 2030 Agenda for Sustainable Development.

COVID-19 has led to massive job losses, particularly among youth and women

By 2020, the global unemployment rate reached 6.5 per cent, up 1.1 percentage points from the previous year. The number of people unemployed worldwide increased by 33 million, reaching 220 million. Another 81 million people left the labour market altogether. Latin America and the Caribbean and Europe and Northern America recorded increases in the unemployment rate of at least 2 percentage points.

Youth and women were especially hard hit, with employment losses of 8.7 per cent and 5.0 per cent, respectively, in 2020, compared with 3.7 per cent for adults and 3.9 per cent for men. Before the pandemic, the unemployment rate of youth was already three times that of adults. During the crisis, women were more likely than men to drop out of the labour force in order to care for children. This further increased longstanding gender gaps in labour force participation rates.

Estimates suggest that three quarters of informal economy workers (1.6 billion) were significantly affected by lockdown measures and/or were working in the hardest-hit sectors. Among them, women were overrepresented in so-called high-risk sectors: 42 per cent of women workers were engaged in those sectors, compared with 32 per cent of men. These workers face a high risk of falling into poverty and will experience greater challenges in regaining their livelihoods during the recovery.

In the decade before the pandemic, the GDP generated by international tourism increased at a higher rate than the rest of the economy, representing 4.1 per cent of global GDP in 2019. However, as one of the sectors most affected by the pandemic, a reversal in this trend is expected for 2020 and the coming years. International tourist arrivals fell drastically from 2019 to 2020 – from 1.5 billion to 381 million. This represents a 74 per cent decline, which takes tourism back to levels seen 30 years ago. It also translates into an estimated loss of $1.3 trillion in global inbound tourism expenditure (spending by non-resident visitors), more than 11 times the loss experienced as a result of the 2007-2009 financial crisis. An estimated 100 million to 120 million tourism jobs have been put at risk due to the pandemic, disproportionally affecting women.

The massive drop in tourism affects all regions, with millions of livelihoods and businesses at risk, and jeopardizes progress towards the SDGs. The impact is especially pronounced in small island developing States (SIDS), since they are more reliant than other countries on tourism as a source of income and employment. Among those States with available data, inbound tourism expenditure represents 25 per cent of GDP on average, compared with 5 per cent among non-SIDS with data. Worldwide, many countries have been able to alleviate the impact of the crisis through the domestic tourism market. However, this is not a feasible alternative for SIDS in the short term, since they are heavily dependent on international tourism and have relatively small domestic markets. International tourism is not expected to return to 2019 levels for up to four years, leaving the poorest island States disadvantaged in terms of progress towards the SDGs.

The pandemic has led to an increase in youth who are not employed, in school or in training

In 2019, 22.3 per cent of the world’s youth were not engaged in either education, employment or training (NEET), a share that has shown no reduction in over a decade. Moreover, quarterly figures indicate that the NEET rate worsened from the fourth quarter of 2019 to the second quarter of 2020 in 42 out of 49 countries with available data. This is not surprising, as young workers were more severely affected than older workers by employment losses in 2020. Both technical and vocational education and on-the-job training suffered massive disruption, forcing many to quit their studies.

Worldwide, young women are twice as likely as young men to be jobless and not engaged in education or training. In 2019, the global NEET rate was 31.1 per cent for young women, compared with 14.0 per cent for young men. Since more women than men have been pushed out of the labour force during the pandemic, the crisis is likely to worsen the NEET gender gap.

Proportion of youth not in education, employment or training, by sex, 2019 (percentage)