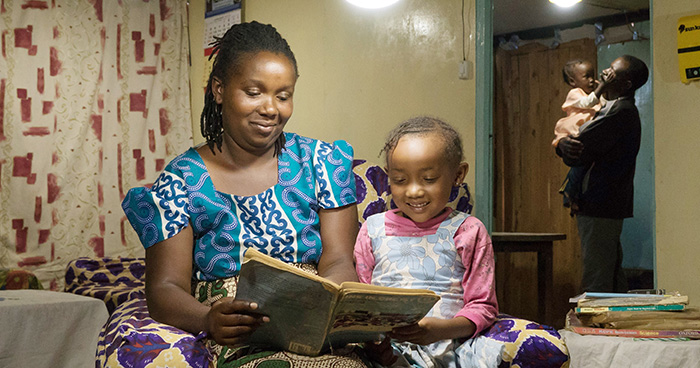 Over the last decade, access to electricity has expanded, use of renewable energy in the electricity sector has increased, and energy efficiency has improved. Still, millions of people are without electricity, and one third of the global population lack clean cooking fuels and technologies. Progress in ensuring energy access has been uneven across regions, leaving the most vulnerable even further behind.

The pandemic is reversing progress and causing millions of people to lose access to electricity. Moreover, depressed oil and gas prices are likely to discourage uptake of clean energy technologies. On the positive side, lower fossil fuel prices provide an opportunity for governments to reform fossil fuel subsidies. Stimulus plans designed to boost economic growth, protect workers and create jobs could scale up the deployment of clean energy technologies.

The COVID-19 pandemic could reverse progress in some countries. In Africa, the number of people without electricity increased in 2020 after declining over the previous six years. In developing countries in Africa and Asia, basic electricity services are now unaffordable for more than 25 million people who had previously gained access, due to population growth and increasing levels of poverty. An additional 85 million people, mainly in developing countries in Asia, may be forced to scale back to basic electricity access because of an inability to pay for an extended bundle of services.

Proportion of population with access to electricity, 2010 and 2019 (percentage)


At the current rate of progress, one third of the world’s population will still be using dangerous and inefficient cooking systems in 2030

In 2010, 57 per cent of the global population were using clean cooking fuels and technologies, rising to 66 per cent in 2019. This means that 2.6 billion people have been left behind. In sub-Saharan Africa, population increases outstripped growth in access, leaving about 85 per cent of the population reliant on inefficient and dangerous cooking systems. The majority of the poor rely on harmful and polluting fuels such as wood and charcoal to cook, making them especially vulnerable to COVID-19. Meanwhile, the pandemic and resulting lockdowns threaten to derail progress. Unless rapid action is taken, one third of the global population will still be without clean cooking fuels and technologies in 2030, resulting in significant adverse health effects and environmental degradation. 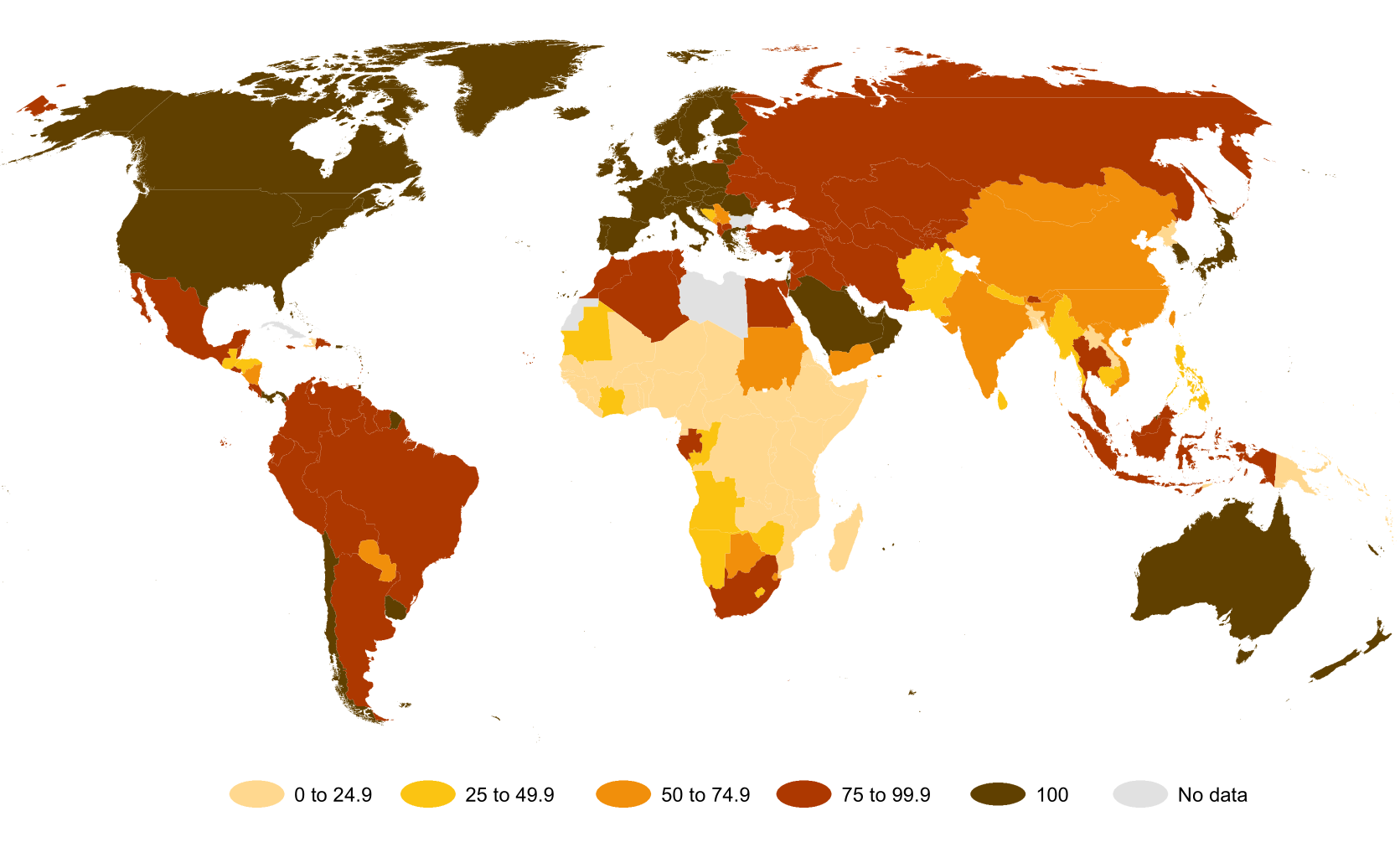 The share of renewable energy in total final energy consumption gradually increased to 17.1 per cent in 2018, up from 16.4 in 2010. The main contribution came from the electricity sector, where the share of renewables now exceeds 25 per cent. Nonetheless, electricity makes up only around 21 per cent of final energy use. The remaining portion is concentrated in the heat and transport sectors, where, in 2018, modern renewables penetrated 9.2 per cent and 3.4 per cent of the global market, respectively. Traditional uses of biomass – such as the burning of wood for heat – still account for almost 14 per cent of global heat consumption.

Excluding traditional uses of biomass, Latin America and the Caribbean shows the highest share of modern renewable energy in total final energy consumption. This is largely due to significant hydropower generation, and to the use of bioenergy in industrial processes and biofuels for transport. In 2018, more than a third of the global annual increase in modern renewable energy consumption took place in Eastern Asia, where wind- and solar-generated electricity dominated growth.

Share of renewable energy in total final energy consumption and by end use, 2010 and 2018 (percentage) 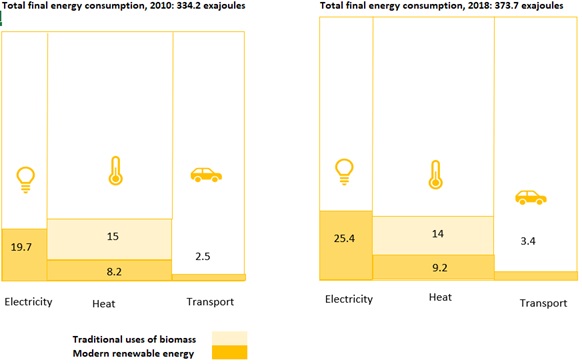 Improving energy efficiency – along with increasing renewable energy deployment – is central to the global goal of reducing greenhouse gas emissions. The 2030 target calls for a doubling of the historical annual improvement rate in energy intensity between 1990 and 2010. Global primary energy intensity, defined as total energy supply per unit of GDP, improved from 5.6 megajoules per dollar in 2010 to 4.8 in 2018, an annual rate of improvement of 2 per cent. This is well below the 2.6 per cent required to meet the target. As a result, progress in energy intensity up to 2030 will now need to average 3 per cent a year. This remains within reach only with significant investment in cost-effective energy efficiency improvements on a systematic scale. While early estimates for 2019 indicated an improvement rate of 2 per cent, the outlook for 2020 suggests a low level of progress at only 0.8 per cent. In the immediate term, energy efficiency improvements continue, thanks to ongoing investments.

International financial flows to developing countries in support of clean and renewable energy reached $14 billion in 2018, 35 per cent lower than in 2017. Such annual fluctuations are mostly due to variations in large hydropower commitments. Hydropower, solar, geothermal and wind projects received 27 per cent, 26 per cent, 8 per cent and 5 per cent of 2018 flows, respectively. Public financial flows continue to be concentrated in a few countries. Argentina, India, Nigeria, Pakistan and Turkey, for instance, received 30 per cent of total commitments from 2010 to 2018. In contrast, the 46 least developed countries together received only 20 per cent of commitments over the same period. Most of the countries with the lowest levels of electricity access are LDCs (particularly in sub-Saharan Africa), but many receive far less international public funding than the global average when measured on a per capita basis.

International financial flows to developing countries in support of clean and renewable energy by type of technology, 2000–2018 (billions of dollars at 2018 prices and exchange rates)