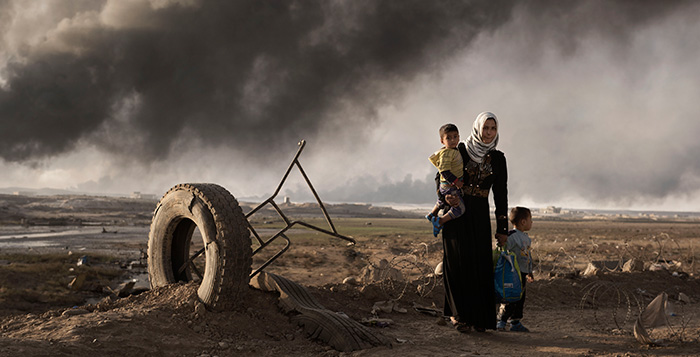 A woman and her two young children flee their home to escape fighting. Each year, tens of millions of people are displaced due to persecution, conflict or generalized violence.

The world is still a long way from achieving the goal of peaceful, just and inclusive societies. Hundreds of millions of people are living in fragile and conflict-affected States. At the end of 2020, about 1 per cent of the global population – 82.4 million people – had been forcibly displaced as a result of persecution, conflict or generalized violence. The COVID-19 pandemic has exposed and intensified inequality and discrimination. In fact, the crisis has created major disruptions in government functioning and has tested, weakened and sometimes even shattered countries’ systems of rights and protection. The pandemic is disproportionately affecting the most vulnerable worldwide, with children at high risk. Recovery from the crisis and sustainable development must be built on a foundation of peace, stability, respect for human rights, effective governance and the rule of law.

The pandemic is intensifying children’s risk of exploitation, including trafficking and child labour

Millions of children around the globe face different forms of exploitation, including trafficking and child labour. The risk to children is increasing due to the combined effects of pandemic-related school closures and economic distress.

Trafficking in persons is found in every country. Perpetrators engaged in this criminal activity target the marginalized and impoverished, including children. Globally, one in three trafficking victims detected in 2018 were a child; in low-income countries, the share was one half. Girls are primarily victims of sexual exploitation (72 per cent of detected girl victims), while boys are mainly subjected to forced labour (66 per cent of detected boy victims). Previous economic crises suggest that the sharp increase in adult unemployment rates and an asymmetric global recovery from COVID-19 is likely to increase the risk of trafficking. Therefore, in all countries, investments in job creation for adults and young people of legal working age, along with economic recovery, could reduce risks to children of various forms of exploitation.

Share of detected trafficking victims by sex and age, 2004–2018 (percentage)

Child labour and child trafficking are interrelated. In countries with a larger share of trafficking victims that are children, there is also a higher prevalence of child labour. Global trends point to a rise in child labour for the first time in two decades. At the start of 2020, the number of children engaged in child labour (not including its worst forms, such as children in bonded and forced labour or in commercial sexual exploitation) totalled 160 million (63 million girls and 97 million boys). This translates to almost 1 in 10 children worldwide. Nearly half of children in child labour were engaged in hazardous work (79 million).

The impacts of COVID-19 threaten to push an additional 8.9 million children into child labour by the end of 2022, as families send children out to work in response to job and income losses. Urgently expanding income support and social protection coverage could help offset this rise.

Corruption is antithetical to sustainable development, aggravating income inequality, reducing domestic and foreign investment, and significantly lowering the quality of public sector services. Yet it is commonplace in many countries to be asked to pay bribes to access essential public services related to health care, education, water, electricity and the justice system. A country’s social and economic development is a key factor in corruption risk. According to the latest available data in more than 120 countries and territories over the period 2011 to 2020, the average prevalence rate of bribery in low-income countries is 37.6 per cent, versus 7.2 per cent in high-income countries. Along with more obvious ramifications, the COVID-19 pandemic has brought unprecedented opportunities for corruption. Addressing corruption will support a more inclusive recovery based on integrity and accountability.

Widespread civilian deaths in armed conflicts persist, although progress has been made in most regions

In 2020, 5 civilians per 100,000 people were killed in armed conflicts, and 1 in 7 of those were women or children. Most civilian deaths were caused by small arms and light weapons (27 per cent) or by heavy weapons and explosive munitions (24 per cent). Throughout 2020, the United Nations has consistently called for a global ceasefire to protect civilians from the deadly combination of armed conflict and COVID-19.

Since 2015, the killings of human rights defenders, journalists and trade unionists have been reported in over one third of Member States. These deaths have persisted despite the pandemic. In 2020, the killings of 331 human rights defenders were reported in 32 countries (an 18 per cent increase from 2019), along with 19 enforced disappearances in 14 countries. Women comprised 13 per cent of the victims and Latin America remains the region most affected. In 2020, 62 journalists were also killed, the lowest annual death toll in the past decade. Impunity is a key driver in these killings; in some contexts, pandemic measures have been used to avoid accountability. Mustering the political will to prosecute perpetrators is key to preventing more deaths. In addition, Member States should publicly applaud the vital contributions of these courageous individuals towards building more just societies based on the rule of law.

Efforts to establish national human rights institutions, which have proven invaluable during the pandemic, need to be reinvigorated

National human rights institutions (NHRIs) are independent bodies that promote and protect human rights. They have played a critical role during the pandemic by examining and monitoring impacts on health and other areas and by highlighting the human rights implications of the crisis. They have also combated the spread of inaccurate and misleading information and worked to protect vulnerable groups. In 2020, 82 countries had independent NHRIs that successfully achieved compliance with international standards, a 17 per cent improvement from 2015. One in three LDCs now have an internationally compliant NHRI, compared with one in five in 2015. These gains, however, are not enough to meet the 2030 target. Progress has stalled in most regions, where no new independent NHRIs have been recognized or established since 2018. Efforts will need to be redoubled to establish and strengthen NHRIs and ensure broader access to human rights promotion and protection services.

Number of countries and territories with independent NHRIs in compliance with the Paris Principles, 2015–2020, and required progress to meet the target, 2020–2030