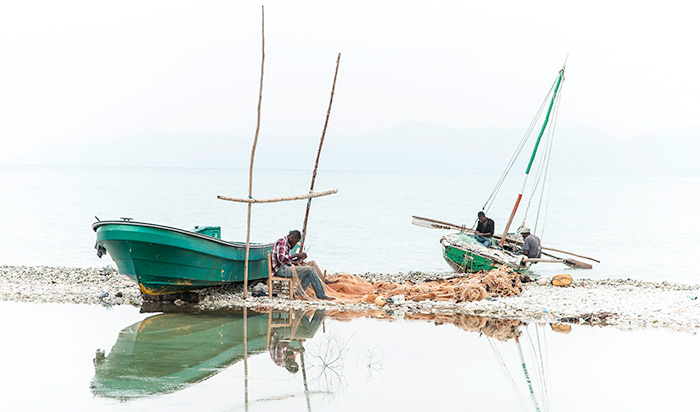 Local fishers in the Caribbean are benefiting from a project to help regenerate the marine ecosystem, manage marine resources while improving the fisheries market, and develop coastal eco-tourism.

More than 3 billion people rely on the ocean for their livelihoods, and over 80 per cent of world merchandise trade is carried out by sea. Oceans contribute to poverty eradication, sustained economic growth and food security. However, the benefits they provide are increasingly undermined by human activities. Rising CO2 emissions are driving ocean warming, acidification and deoxygenation, which threaten marine ecosystems and the people who depend on them, and are overwhelming the capacity of oceans to moderate climate change. Overfishing depletes fish stocks, a third of which are already overexploited. Land-based pollutants, including plastic pollution and nutrient and sewage runoff, adversely affect coastal habitats and communities. These changes have long-term repercussions that require urgent scaling up of protection of marine environments, investment in ocean science, and support for small-scale fishing communities and the sustainable management of the oceans.

The extent of marine protected areas has increased significantly, with 2020 coverage reaching 7.74 per cent of global coastal waters and oceans. The 10 per cent target set for 2020 may still be met, because several sites planned for designation in 2020 were delayed. Between 2000 and 2020, the mean percentage of key biodiversity areas (KBAs) covered by protected areas grew from 28 per cent to 44 per cent. However, increases have plateaued, and coverage rose by only 1 percentage point over the last five years. On average, over half of each KBA remains outside of any form of protection.

Safeguarding KBAs remains crucial to the sustainability of oceans. A recent example from the South Atlantic used satellite tracking data for 14 species of seabirds and seals to pinpoint breeding grounds and feeding sites crucial to the preservation of these and other species. This information was used to revise the management of a marine protected area by extending the closure of fisheries by two months and expanding several permanent no-fishing zones, while allowing commercial fishing to occur in a regulated manner.

Coastal areas, home to almost 40 per cent of the world’s population, face growing risks from eutrophication – excess nutrient loading into coastal environments resulting from human activities. The primary drivers of eutrophication are fertilizer run-off, livestock waste, sewage discharge, aquaculture and atmospheric nitrogen emissions. Coastal eutrophication is detrimental to the environment and coastal populations, and is associated with harmful algal blooms, hypoxia, fish kills, seagrass die-off, loss of coral reef and nearshore hard-bottom habitats, and health hazards to swimmers and fishers. The number of dead zones worldwide – areas of water that lack sufficient oxygen to support marine life – increased from around 400 in 2008 to approximately 700 in 2019.

Changes in eutrophication can be indirectly monitored by analysing algal growth and chlorophyll-a (the pigment that makes plants and algae green). Global satellite data show that countries’ exclusive economic zones have higher levels of chlorophyll-a compared with baseline values from 2000–2004. Still, there are some signs of progress: the frequency of chlorophyll-a anomalies in countries’ exclusive economic zones fell by 20 per cent from 2018 to 2020. Efforts to reduce nutrient inputs into coastal areas are yielding results in some regions; however, algal blooms suggest that coastal eutrophication remains a challenge.

Implementation of international instruments to conserve and responsibly use ocean resources remains uneven, highlighting the need for increased support

Achieving Goal 14 requires the implementation of international instruments, through legal and institutional frameworks, for the conservation and sustainable use of oceans in a cross-sectoral and integrated manner. While progress has been made, implementation varies among the instruments, highlighting the need for renewed effort and increased support.

To date, 168 Parties (including the European Union) have ratified or acceded to UNCLOS. In addition, Member States have also ratified or acceded to its implementing agreements (150 Parties for the 1994 Part XI Agreement and 91 Parties for the 1995 United Nations Fish Stocks Agreement). A large number of States Parties to these treaties have taken steps to implement them through legal, policy and institutional frameworks. However, the extent of ratification, accession and implementation varies by country. Data collected in 2021 from 45 States and the European Union show that in terms of ratification and accession, 84 per cent of the countries score very high or high, and 16 per cent score low or very low; with regard to implementation, 69 per cent score very high or high, 12 per cent score medium, and 19 per cent score low or very low. Effectively implementing UNCLOS and its implementing agreements requires understanding existing bottlenecks for countries. Targeted and sustained capacity-development initiatives, particularly for developing countries, are key to removing such obstacles.

Fisheries resources are frequently poached, leading to the collapse of local fisheries and undermining efforts to manage fisheries sustainably. Part of the framework developed over the past decades to combat illegal, unreported and unregulated (IUU) fishing includes the Agreement on Port State Measures – the first binding international agreement that specifically targets IUU fishing. The Agreement came into force in 2016 and currently includes 66 Parties (including the European Union). Its objective is to prevent, deter and eliminate IUU fishing by preventing vessels engaged in it from using ports and landing their catches. Between 2018 and 2020, the average degree of implementation of international instruments to combat IUU fishing improved, with the global composite measure rising from 3/5 to 4/5 over this period. This slight improvement in the global trend helps bring the target of eliminating IUU fishing closer to being met. However, more concerted efforts are needed.

The Voluntary Guidelines are an internationally agreed instrument that promotes improved governance of small-scale fisheries, including in value chains, post-harvest operations and trade. About half of countries worldwide have adopted specific initiatives to support small-scale fishers. Such fishers contribute about half of global fish catches in developing countries and employ more than 90 per cent of the world’s capture fishers and fish workers, about half of whom are women. These small-scale fishing communities are largely marginalized and tend to have limited or disadvantaged access to resources and markets. The situation is compounded by the COVID-19 crisis, which has triggered reduced global demand and transportation restrictions.

Since 2015, most regions have expanded the adoption of regulatory frameworks that support small-scale fisheries and promote participatory decision-making. Globally, the average composite score for implementation of these frameworks improved from 3/5 to 4/5 between 2018 and 2020. At the regional level, Northern Africa and Western Asia reflects this leap, while Central and Southern Asia reduced its regional score from 3/5 to 2/5, highlighting the need for redoubled efforts. While countries’ commitment is gaining traction, increased support for small-scale fishers is critical in light of the coronavirus pandemic.

Degree of implementation of international instruments to promote and protect small-scale fisheries, 2018–2020

Marine research can be expensive and logistically challenging, requiring advanced technologies and equipment, research vessels and specially designed sensors and facilities. However, the proportion of gross domestic expenditure on research and development devoted to ocean science is decidedly smaller than that of other major fields of research and innovation. On average, only 1.2 per cent of national research budgets were allocated for ocean science between 2013 and 2017, with shares ranging from around 0.02 per cent to 9.5 per cent. This proportion is miniscule compared with the modestly estimated $1.5 trillion contribution of the ocean to the global economy in 2010. The United States of America reported the highest budget for ocean and coastal activities, a figure that includes ocean science, as well as other ocean and coastal government programmes ($12 billion), followed by Japan ($600 million) and Australia ($511 million) in 2017.

The full impact of the COVID-19 pandemic on ocean science is still unknown. Immediate effects have included dramatic reductions in ocean observations with almost all research vessels called to home ports. Mooring arrays (buoys and moored systems with instruments and communication equipment) are at risk of failure, threatening long-lasting repercussions for international ocean research.