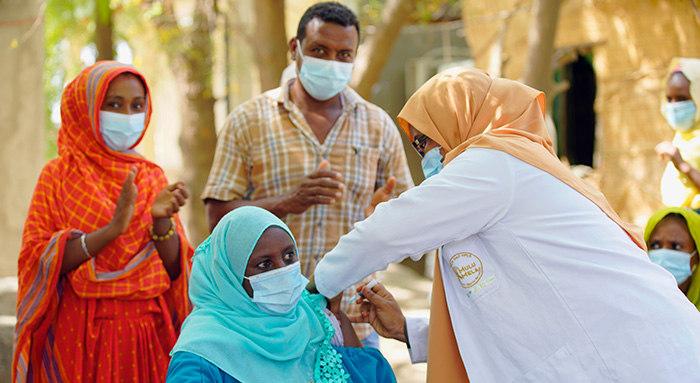 Many health indicators were moving in the right direction before the threat of COVID-19 emerged. Maternal and child health had improved, immunization coverage had increased and communicable diseases had been reduced, although not fast enough to meet those 2030 targets. The pandemic has halted or reversed progress in health and poses major threats beyond the disease itself. About 90 per cent of countries are still reporting one or more disruptions to essential health services, and available data from a few countries show that the pandemic has shortened life expectancy. Not surprisingly, the virus is disproportionately affecting disadvantaged groups.

Beyond millions of deaths worldwide, the full toll of the COVID-19 pandemic on health is not yet known

As of June 2021, total reported deaths from COVID-19 reached 3.7 million globally. Europe and Northern America experienced the largest loss at close to 1.7 million, followed by Latin America and the Caribbean at about 1.2 million, and Central and Southern Asia at slightly under half a million.

For those who survived the virus, COVID-19 may have lingering health effects, including long-term disability due to lung scarring and heart damage, along with mental health issues that could affect individuals for a prolonged period. Indiscriminate use of antibiotics during the pandemic could further increase antimicrobial resistance. Although it is still too early for existing data to reflect this impact, the COVID-19 pandemic threatens to reverse years of progress towards improved worldwide health. Evidence from countries with reliable and timely vital statistics indicates that the COVID-19 pandemic has sharply shortened life expectancy.

Cumulative number of reported COVID-19 deaths, as of 8 June 2021

A decade of progress in reproductive, maternal and child health could be stalled or reversed by the pandemic

Substantial progress has been made towards ending preventable child deaths. The global under-5 mortality rate was halved from 2000 to 2019 – falling from 76 to 38 deaths per 1,000 live births. Over the same period, the global neonatal mortality rate (death in the first 28 days of life) fell from 30 to 17 deaths per 1,000 live births. Still, 5.2 million children died before their fifth birthday in 2019, with almost half of these deaths (2.4 million) occurring in the first month of life.

Globally, 83 per cent of births were assisted by skilled health professionals, including medical doctors, nurses and midwives, according to data from 2014 to 2020. This represents a 17 per cent increase from 2007 to 2013. The global adolescent birth rate also showed progress – falling from 56.4 to 41.2 births per 1,000 adolescents aged 15 to 19 from 2000 to 2020. Declines varied considerably across regions, with the largest drops occurring in Central and Southern Asia, from 70.2 to 23.7 births per 1,000 adolescents over the same time period. Unfortunately, the proportion of women of reproductive age (15–49 years) who have their need for family planning satisfied with modern contraceptive methods has stagnated at around 77 per cent since 2015.

In 2020, 35 per cent of countries reported interruptions in reproductive, maternal, newborn, child and adolescent health services, along with nutrition services. This magnitude of disruptions could stall or even reverse the progress highlighted above. Disruptions in health services due to the pandemic may have contributed to 228,000 additional child deaths and around 11,000 additional maternal deaths during 2020 in South Asia alone.

Before the pandemic, steady progress had been made in reducing mortality from non-communicable diseases (NCD). Between 2010 and 2019, the probability of dying from any of the four main NCDs (cardiovascular disease, cancer, diabetes and chronic respiratory disease) for people between the ages of 30 and 70 declined from 19.9 per cent to 17.8 per cent. If the rates of decline since 2000 are sustained, Australia and New Zealand, as well as Europe and Northern America will be on track to reach the SDG target of reducing by one third premature mortality from NCDs.

The COVID-19 pandemic has compounded the challenges facing individuals with NCDs. Those with these underlying conditions or who use tobacco are at an increased risk of severe COVID-19 infection and death. Moreover, nearly half of countries reported one or more disruptions to essential NCD services. This could potentially result in a surge of complications and deaths over the long term in individuals with NCDs or related risk factors.

Probability of dying from any of the four main non-communicable diseases between the ages of 30 and 70, 2010 and 2019 (percentage) 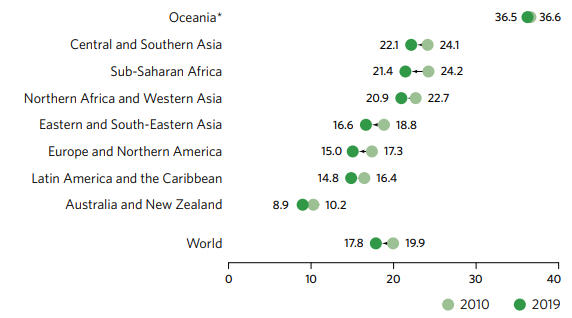 Globally, HIV incidence among adults aged 15 to 49 declined by 24 per cent over the last decade. It fell from 0.48 infections per 1,000 uninfected people in 2010 to 0.37 in 2019, when 1.7 million new HIV infections were reported – still three times the global target of fewer than 500,000 by 2020. The main reasons targets were missed were inequalities in access to HIV prevention, testing and treatment services across regions, countries and subpopulations within countries. The pandemic has caused considerable disruptions to HIV services.

In 2019, an estimated 10 million people fell ill with tuberculosis (TB), the leading killer from a single infectious agent. Between 2015 and 2019, the global TB incidence rate declined from 142 to 130 new and relapse cases per 100,000 people. This 8.5 per cent decline fell short of the target of a 20 per cent reduction between 2015 and 2020. An estimated 1.4 million fewer people received the necessary care for TB in 2020 compared with 2019 due to the COVID-19 pandemic, a reduction in treatment of 21 per cent. In India, Indonesia, the Philippines and South Africa, four countries that account for 44 per cent of global TB cases, there was a 25 to 30 per cent drop in the reported number of people diagnosed with TB between January and June 2020, compared with the same period in 2019.

From 2000 to 2015, the incidence rate of malaria fell from 80 to 57 cases per 1,000 people at risk, and then plateaued from 2015 to 2019. In 2019, an estimated 229 million cases and 409,000 deaths due to malaria were reported worldwide. The Africa region carried a disproportionate share of the global malaria burden, with 94 per cent of malaria cases and deaths in 2019. Gaps in funding and access to life-saving tools are undermining global efforts to curb the disease, and the COVID-19 pandemic is expected to set the fight back even further. In the first three months of 2021, between 30 and 40 per cent of malaria-endemic countries reported some level of disruption to services involving malaria diagnosis and treatment. A 10 per cent disruption in access to effective treatment in sub-Saharan Africa could lead to 19,000 additional deaths.

The global suicide death rate declined by 36 per cent between 2000 and 2019, from 14 to 9 deaths per 100,000 people. More than 700,000 suicides were reported globally in 2019, with men nearly twice as likely as women to kill themselves. Suicide is among the leading causes of mortality among people aged 15 to 29, constituting around 8 per cent of all deaths in this age group. The devastation of the pandemic has already had a marked effect on people’s mental health. A World Health Organization (WHO) survey showed that 90 per cent of countries in early 2021 reported that mental health and psychosocial support were included in their COVID-19 response plans.

Increases in alcohol consumption during the pandemic could have an adverse impact on both physical and mental health. In 2019, an average of 5.8 litres of pure alcohol per person was consumed by people aged 15 and older. Europe has the highest per capita alcohol consumption in the world, at 11.0 litres per year.

Road injuries killed about 1.3 million people worldwide in 2019. The global mortality rate due to road injuries declined by 8.3 per cent from 2010 to 2019, from 18.1 deaths per 100,000 people to 16.7. During COVID-19 lockdowns, road traffic volume declined tremendously. Nevertheless, road injuries are the leading killer of men aged 15 to 29, contributing to 18 per cent of all deaths in this age group.

COVID-19 disproportionately affects the elderly, the poor, refugees and migrants, and a broad range of vulnerable groups due to their specific health and socioeconomic circumstances, poor living conditions and lack of access to high-quality public health care. Moreover, the collateral effects of the pandemic resulting from the global economic downturn, social isolation and movement restrictions inequitably affect those who are already marginalized.

Older persons: Available age-disaggregated national data showed that people aged 65 and over comprised close to 80 per cent of all COVID-19 deaths, even though only 14 per cent of confirmed COVID-19 cases were for that age group.

Distribution of reported COVID-19 cases and deaths by age, January 2020 through April 2021 (percentage)


The poor: Prior to the pandemic, an estimated 927 million people, or 12.7 per cent of the global population, made out-of-pocket health-care payments representing more than 10 per cent of their household budgets. This pushed almost 90 million people below the extreme poverty line. With increasing poverty due to the pandemic, out-of-pocket health spending will likely pose an even greater threat to the poor than spending on other essentials, such as food and education.

Refugees and migrants: The pandemic has worsened already-distressed living and health conditions of refugees and migrants. Around 5 per cent of survey respondents did not seek health care even when they had COVID-19 symptoms. The main reasons cited were inadequate financial resources, fear of deportation, and lack of health care or no entitlement to such care.

People living in developing regions: Equitable access to vaccines – with a focus on protecting priority populations, including health workers and those most at risk – is one of the most important measures that could be taken to mitigate health and economic impacts and bring the pandemic under control. As of 17 June 2021, close to 2.4 billion COVID-19 vaccine doses had been administered globally. Vast inequities exist in distribution, however: for every 100 people, around 68 vaccines were administered in Europe and Northern America, compared with fewer than 2 in sub-Saharan Africa.

Universal health coverage is a major factor in reducing inequality and fighting poverty. It means that all people have access to the health services they need, when and where they need them, without incurring financial hardship. It includes the full range of essential services, from health promotion to prevention, treatment, rehabilitation and palliative care.

Improvements in coverage have been recorded in all regions and in all income groups: the Universal Health Coverage Service Coverage Index increased from an average of 45 (out of 100) in 2000 to 66 in 2017. The most progress was made in sub-Saharan Africa, with the index almost doubling from 2000 to 2017 – from 23 to 44. The ongoing COVID-19 pandemic compounds the challenges faced by countries with weaker health systems.

Health and care workers are on the front lines of the COVID-19 pandemic response. This has further constrained the delivery of essential health services, especially for countries with a limited health workforce. According to data from 2013–2019, the density of nursing and midwifery personnel in Northern America is over 150 per 10,000 people – over 15 times that of sub-Saharan Africa and 8 times that of Northern Africa and Southern Asia. The density of medical doctors in Northern America, Oceania and Central Asia is around 25 per 10,000 people, compared with 2 per 10,000 in sub-Saharan Africa.

The main obstacle to understanding the true magnitude and impact of the COVID-19 pandemic is a lack of data. Globally, only 62 per cent of countries had a death registration system that was at least 75 per cent complete in 2015–2019; the share in countries in sub-Saharan Africa was less than 20 per cent. The pandemic is further challenging many civil registration systems. A survey carried out by the United Nations Department of Economic and Social Affairs Statistics Division in April/May 2020 showed that 13 per cent of reporting countries designated civil registration as “non-essential”, following national restrictions in service delivery.

While public health surveillance systems have made tremendous efforts in reporting COVID-19 cases to WHO, basic characteristics such as age and sex are often missing. Overall, between January 2020 and April 2021, information on age was missing from the reports of 44 per cent of all cases. For countries in Africa, sex and age information were missing from nearly all case reports.


Note: Regional groupings are those used by WHO.