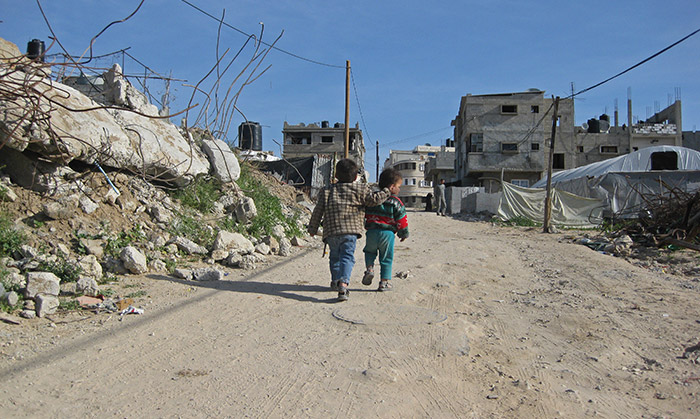 Conflict, insecurity, weak institutions and limited access to justice remain threats to sustainable development. In 2019, the number of people fleeing war, persecution and conflict exceeded 79.5 million, the highest level recorded since these statistics have been systematically collected. One in four children continues to be deprived of legal identity through lack of birth registration, often limiting their ability to exercise rights in other areas. The COVID-19 pandemic threatens to amplify and exploit fragilities across the globe. In March 2020, the Secretary-General launched an appeal for an immediate global ceasefire to aid in the delivery of humanitarian assistance and open channels for diplomacy, in particular for those most vulnerable to COVID-19. The measure is being met with support, but implementation challenges still exist.

Every day, 100 civilians – including women and children – are killed in armed conflicts despite protections under international law

Under international law, civilians are to be protected in armed conflicts. Yet, at least 106,806 civilian deaths were recorded by the United Nations in 12 of the world’s deadliest armed conflicts between 2015 and 2017. This translates to an average of 11.9 civilian deaths per 100,000 population each year; one in eight of those deaths was a woman or child. Most of the civilian deaths were caused by heavy weapons and explosive munitions, followed by planted explosives and unexploded ordnance. More than 20,000 civilians were killed or injured in 10 conflicts in 2019, which is only a fraction of the actual total.

The threat of COVID-19 is greater in situations of armed conflict, where fighting has ravaged health systems, displaced people and forced them to live in overcrowded conditions with marginal or no access to basic services. The terrible suffering of civilians could be significantly reduced if parties to conflict respected international humanitarian and human rights laws. More must be done to prevent, reduce and resolve ongoing conflicts.

**"Other" refers to weapons that are incendiary; chemical, biological, radiological or nuclear; electromagnetic; or other, less lethal weapons. The category also includes denial of access to or destruction of objects indispensable to survival; accidents related to conflict; use of objects and other means; multiple weapons used and other causes.

Stronger efforts are needed to reduce the global homicide rate, which is dropping too slowly

Policies adopted by Governments subsequent to the COVID-19 pandemic have had different impacts on homicide prevalence in various countries. Trends suggest that lockdown measures have hardly affected violence in Latin American countries with high levels of homicides, but the intense lockdown measures in European countries with low levels of homicide seem to have drastically reduced violence.

Children are regularly exposed to multiple forms of violence, many of which are unrecognized and unreported

Violent forms of discipline are widespread, despite their detrimental and often long-lasting impact. Nearly eight in ten children from 1 to 14 years of age were subjected to some form of psychological aggression and/or physical punishment at home in the previous month in 69 (mostly low- and middle-income) countries with available data from 2012 to 2019.

Trafficking of children is a global problem, mostly associated with sexual exploitation, but also forced labour. In 2016, children accounted for almost one third of detected trafficking victims worldwide (23 per cent were girls and 7 per cent were boys). Large areas of impunity for this crime still exist, even though most countries have comprehensive trafficking-in-persons legislation in place. However, the number of convictions has recently started to increase in response to improvements in detection.

Sexual violence, one of the most disturbing violations of children’s rights, is widely underreported. A lack of comparable data also limits understanding of the full extent of the problem. In slightly more than one in four countries with comparable data, at least 5 per cent of women between 18 and 29 years of age reported experiencing sexual violence in childhood.

The impact of COVID-19 on children’s risk of exposure to violence and exploitation due to lockdowns and associated school closures, which have affected the majority of children globally, is still largely unknown. Some countries have seen a surge in reports of violence against children at home. In addition, use of the Internet for remote learning may increase children’s exposure to cyberbullying, risky online behaviour and online predators.

All of these forms of violence can have devastating and lifelong implications for millions of children worldwide. Urgent actions are needed to advocate for and invest in effective child protection solutions.

Exposure to COVID-19 is among the many inhumane conditions faced by those who are incarcerated, often unsentenced

Access to justice for all should ensure a fair trial within a reasonably short period of time. However, 31 per cent of prisoners worldwide are being held in detention without being sentenced for a crime – a level that has not declined since 2005. Significant increases over the past three years were recorded in all regions of Asia and in Oceania.

Prison overcrowding remains a serious problem in many countries, often leading to inhumane conditions, the violation of human rights, violence among prisoners and reduced prospects for rehabilitation. Overcrowding is accelerating the spread of COVID-19 across jails and prisons worldwide due to cramped quarters, and the frequent lack of protective gear and access to adequate health care. Out of 190 countries worldwide with available data, almost 60 per cent had prison populations exceeding prison capacity; 13 per cent of countries had between 120 per cent and 149 per cent of capacity, and 28 per cent had 150 per cent of capacity or more.

Across all regions, people defending the human rights and fundamental freedoms of others are the targets of violent attacks. From 2015 to 2019, the United Nations recorded at least 1,940 killings and 106 enforced disappearances of human rights defenders, journalists and trade unionists across 81 countries, with over half of killings occurring in Latin America and the Caribbean. In 2019, 357 killings and 30 enforced disappearances were reported in 47 countries. While the 2019 toll constitutes the lowest number of killings of journalists per year in over a decade, journalists are increasingly experiencing verbal and physical attacks, including online, in connection with their work. Women journalists in particular are targeted by online harassment. This is underscored by a marked rise in widespread hostile rhetoric directed at the media and journalists.

More countries now have freedom-of-information laws, but their implementation could be stepped up

The right to information held by public authorities is an integral aspect of freedom of expression and serves as a mechanism to support government openness and accountability as well as enhanced empowerment and equality among all social groups. Progress is being made in ensuring this right through policies and binding laws. Such laws have now been adopted by 127 countries, with at least 27 adopting guarantees since 2014. However, of 73 public authorities surveyed, only 58 per cent provided specialized training on the right to information for their information officers. The same percentage reported publishing guidelines for requests for the public. Survey results indicate that oversight and appeals bodies (as opposed to multi-purpose bodies) should be essential components of access-to-information law enforcement and specialized entities.