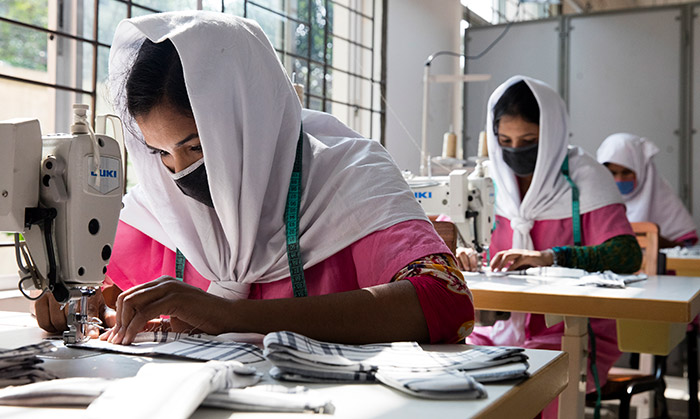 After the global economic downturn in 2009, the world as a whole witnessed rising labour productivity and improved unemployment rates, despite large disparities across regions. Ten years later, in 2019, the global economy again slowed, with the lowest growth since 2008–2009. The coronavirus in 2020 has caused abrupt and profound changes, slowing the economy even further. It is having an adverse impact on the world's labour markets, particularly on workers in informal employment, the self-employed, daily wage earners and workers in sectors at the highest risk of disruption. In fact, we can expect the biggest increase in global unemployment since World War II. At the same time, the crisis poses a serious threat to the occupational safety and health of workers, and may increase the risk of child labour. Urgent policy measures are needed to support businesses, boost labour demand and preserve existing jobs – especially for the most vulnerable – to achieve full and productive employment and decent work for all women and men.

Even before the pandemic, economic growth in LDCs, while rapid, failed to approach the 7 per cent target

Globally, real GDP per capita growth rate was 2.0 per cent in 2018 – the same level as the average annual growth rate between 2010 and 2018. Sustained per capita growth during this period was driven mainly by strong progress in Eastern and South-Eastern Asia and in Central and Southern Asia. In 2019, the growth rate dropped to 1.5 per cent and, in 2020, the coronavirus pandemic is pushing the world into the worst economic crisis since the Great Depression. Real GDP per capita is expected to decline by 4.2 per cent in 2020 before increasing again in 2021 at a rate of 3.1 per cent.

The global average output per worker – a measure of labour productivity – has steadily increased since 2000, with growth interrupted only briefly during the economic downturn of 2009. The growth rate in labour productivity reached 1.6 per cent in 2018 and 1.4 per cent in 2019. However, these levels varied considerably across regions: in 2019, while labour productivity declined in Latin America and the Caribbean, Northern Africa and Western Asia and sub-Saharan Africa, it rose everywhere else and was especially fast in Eastern and South-Eastern Asia and in Central and Southern Asia. Labour productivity growth in 2020 may be adversely affected by the global reduction in working hours and the economic decline caused by the coronavirus crisis.

In 2016, an alarming 61 per cent of workers globally were engaged in informal employment. Typically, informality has a negative impact on earnings, working time, occupational safety and health, and working conditions generally. In 2016, informal employment was much more widespread in the agricultural sector (94 per cent) than in the non-agricultural sector (51 per cent). Reliance on informal workers was also more prevalent in certain regions, including sub-Saharan Africa (89 per cent) and Central and Southern Asia (86 per cent). Due to unemployment and underemployment caused by the coronavirus crisis, some 1.6 billion workers in the informal economy – half of the global workforce – may be significantly affected. Globally, the income of informal workers is estimated to have dropped by 60 per cent in the first month of the crisis, and up to 81 per cent in some regions. Significant policy measures are urgently needed to protect both enterprises (particularly smaller businesses) and workers in the informal economy to achieve decent work for all by 2030.


Global unemployment may reach an historic high in 2020, depending on the policies adopted

The pandemic is expected to have a devastating impact on global unemployment. According to estimates from the International Labour Organization, global working hours could drop by 14 per cent in the second quarter of 2020. This is equivalent to approximately 400 million full-time workers doing a 48-hour work week. The eventual increase in global unemployment over 2020 will depend on how effectively policy measures preserve existing jobs and boost labour demand once the recovery phase begins.

In the age of COVID-19, occupational safety and health, a core aspect of decent work, is more important than ever. Workers have the right to feel safe in their workplaces, but many are exposed to undue risks. More than 10 work-related fatalities were reported per 100,000 workers in 9 out of 71 countries with available data since 2010. The same data showed that migrants are exposed to more risks and hazards at work than non-migrant workers. They also had a higher incidence of fatal and non-fatal occupational injuries than non-migrant workers in three quarters of countries with recent comparable data.

Implementing adequate health and safety measures and promoting supportive working environments are fundamental to protecting the safety of workers. This is especially relevant for health workers and those providing essential services during the pandemic. In addition, policies must ensure that all necessary precautions are taken to protect both workers and consumers as workplaces reopen.

During 2008–2018, the contribution of tourism to total GDP increased in 43 of the 70 countries that reported data. This highlights the growing importance of tourism in the global economy, and its potential for contributing to sustained, inclusive and sustainable economic growth. Tourism is one of the economic sectors most affected by the COVID-19 pandemic due to the closure of borders, travel bans and lockdown measures. Depending on when travel restrictions are lifted and national borders reopen, international travel arrivals in 2020 may decrease by 60 to 80 per cent compared with 2019. Countries with the highest number of reported COVID-19 cases account for about 55 per cent of global inbound and 68 per cent of global outbound tourism expenditure. The effects of the crisis on these economies will spill over to other countries, particularly those small island developing States and territories that are heavily dependent on international tourism from affected source markets.