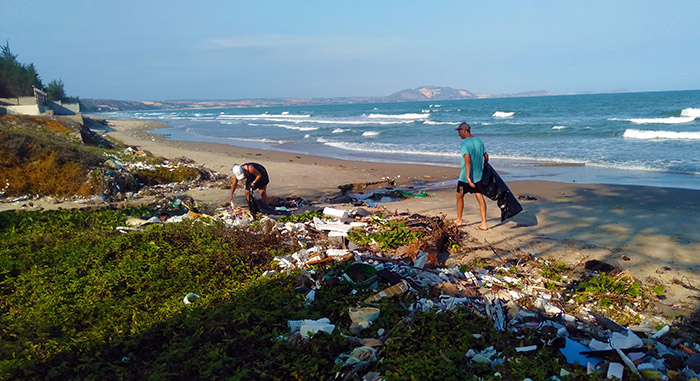 Oceans are our planet’s life support and regulate the global climate system. They are the world’s largest ecosystem, home to nearly a million known species, containing vast untapped potential for scientific discovery. Oceans and fisheries continue to support the global population’s economic, social and environmental needs. Despite the critical importance of conserving oceans, decades of irresponsible exploitation have led to an alarming level of degradation. Current efforts to protect key marine environments and small-scale fisheries, and to invest in ocean science are not but meeting the urgent need to safeguard this vast, yet fragile, resource. The drastic reduction in human activity brought about by the COVID-19 crisis, while rooted in tragedy, is a chance for oceans to recuperate. It is also an opportunity to chart a sustainable recovery path that will ensure livelihoods for decades to come in harmony with the natural environment.

The ocean is the planet’s largest carbon sink, absorbing around 23 per cent of annual CO2 emissions generated by human activity and helping to mitigate the impacts of climate change. However, the absorbed CO2 has caused seawater to become more acidic, evidenced by a 26 per cent drop in pH levels since pre-industrial times. Ocean acidification endangers coral reefs and other key species that are the base of the marine food chain, and has negative effects on marine ecosystem services, including fisheries and aquaculture, coastal protection, transportation and tourism. The more acidic the ocean becomes, the lower its capacity to absorb CO2 from the atmosphere and to moderate climate change. Information drawn from a new ocean acidification data portal shows an increase in pH variability (up to 10–30 per cent in the past five years) and in ocean acidity. By the end of this century, a 100–150 per cent rise in acidity is projected, affecting half of all marine life.

While protection of marine environments is expanding, it is critical that coverage extend to key biodiversity areas

Marine protected areas are vital to the sustainable development of oceans. They safeguard vulnerable species and ecosystems, conserve biodiversity, and avert potential conflicts among users by delineating specific allowed activities. As of December 2019, over 17 per cent (or 24 million square kilometres) of waters under national jurisdiction (0 to 200 nautical miles from shore) were covered by protected areas. Coverage has increased significantly over the years, more than doubling since 2010.

Protected area networks must continue to expand to increase their coverage of key biodiversity areas (KBAs). The global mean percentage of each marine KBA covered by protected areas increased from 30.5 per cent in 2000 to 44.8 per cent in 2015 and 46.0 per cent in 2019. While this represents substantial progress, many KBAs have only partial or no protected area coverage. Least developed countries and small island developing States continue to lag behind at 25.4 per cent and 23.7 per cent, respectively.

Mean percentage of each marine key biodiversity area covered by protected areas, by geographic region, 2010, 2015 and 2019

Countries are curtailing illegal fishing through a binding international agreement, but even more concerted action is required

Illegal, unreported and unregulated fishing threatens the social, economic and environmental sustainability of global fisheries; it also hinders countries’ ability to manage their fisheries effectively. Adopting and implementing relevant international instruments is key to curbing this destructive practice. As of 14 February 2020, the number of parties to the Agreement on Port State Measures – the first binding international agreement that specifically targets this type of fishing – increased to 66 (including the European Union), up from 58 the year before.

Based on their own reporting, countries have made good progress overall in carrying out the recommended measures to combat illegal, unreported and unregulated fishing. In 2020, close to 75 per cent scored high in their degree of implementation of relevant international instruments, compared with 70 per cent in 2018. But while impressive progress has been made, further concerted global action is required to ensure that illegal, unreported and unregulated fishing no longer represents a threat to the sustainability of fisheries worldwide.

Managing fish stocks sustainably is crucial to harnessing the benefits of fisheries and aquaculture to alleviate poverty, hunger and malnutrition, and to generate economic growth. In recent years, the contribution of sustainable fisheries to global GDP has hovered at around 0.1 per cent per year, reflecting the interplay of two opposing trends: the consistently rising value added of the fisheries and aquaculture sector, and the continued decline in the sustainability of global fish stocks. The contribution of sustainable marine capture fisheries to GDP has been markedly higher in small island developing States in Oceania and in LDCs, where fishing activities are vital for local communities and indigenous peoples. The share of sustainable fisheries in the GDP of these groups of countries averaged 1.55 per cent and 1.11 per cent, respectively, for the period 2011–2017.

Small-scale fishers, who account for more than half of total fishery output in developing countries, continue to be among the most marginalized food producers. Moreover, evidence suggests that the COVID-19 crisis is already affecting their livelihoods adversely, as global demand for seafood dwindles and transportation restrictions prevent market access. At the same time, small-scale producers fulfil a critical role in providing food for local communities. It is more important than ever for countries to support small-scale fishers as key contributors to sustainable food systems. This can be achieved by adopting specific initiatives to implement the internationally agreed Voluntary Guidelines for Securing Sustainable Small-Scale Fisheries in the Context of Food Security and Poverty Eradication.

The proportion of fish stocks within biologically sustainable levels decreased from 90.0 per cent in 1974 to 66.7 per cent in 2015 and 65.8 per cent in 2017. Despite this continued deterioration, the rate of decline has slowed in recent years. While encouraging, this will not be enough to prevent a medium-term collapse of certain global fisheries unless measures are more widely adopted to restore stocks to biologically sustainable levels.

Proportion of fish stocks within biologically sustainable levels, by marine region, 2015 and 2017 (percentage)