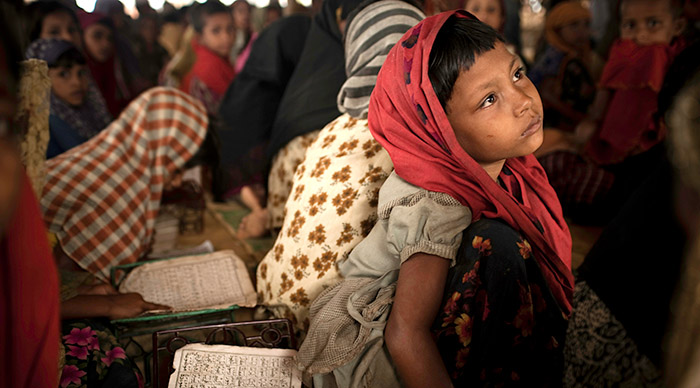 Despite progress, the world is not on track to meet 2030 education targets. Before the coronavirus crisis, projections showed that more than 200 million children would be out of school, and only 60 per cent of young people would be completing upper secondary education in 2030. Education systems worldwide have been hit hard and abruptly by the pandemic. School closures to stop the spread of COVID-19 have affected the vast majority of the world’s student population. Disrupted education is adversely affecting learning outcomes and social and behavioural development of children and youth. Children and youth in vulnerable and disadvantaged communities are particularly at risk of educational exclusion. The pandemic is deepening the education crisis and widening existing educational inequalities.

Before the coronavirus crisis, the proportion of children and youth out of primary and secondary school had declined from 26 per cent in 2000 to 19 per cent in 2010 and 17 per cent in 2018. Despite some progress, 258 million children and youth were still out of school in 2018, of which three quarters lived in sub-Saharan Africa and Southern Asia. Girls face more barriers than boys at the primary level. Globally, around 5.5 million more girls than boys of primary school age were out of school in 2018. The disadvantage girls face is more prominent in sub-Saharan Africa, where there were 128 girls for every 100 boys out of primary school that year.

In 2020, as COVID-19 spreads across the globe, more than 190 countries have implemented nationwide school closures. About 90 per cent of all students (1.57 billion) were out of school. Although distance learning solutions are provided in four out of five countries with school closures, at least 500 million children and youth are currently excluded from these options. The sheer magnitude of school closures is likely to set back progress on access to education.

Proportion of children and youth out of primary, lower and upper secondary school, 2000–2018 (percentage)


Without remedial action, the effects of COVID-19 will only add to the obstacles faced by poor children in completing their education

Months of absence from school owing to COVID-19 are likely to impact education outcomes. In the longer term, prolonged absence from school is associated with lower retention and graduation rates and worse learning outcomes, in particular among segments of the population that are already disadvantaged, including members of poor households and students with disabilities.

During the COVID-19 pandemic, many schools are offering remote learning to students through virtual classrooms to mitigate the impact of school closures. While this is an option for some, it is out of reach for many. Lack of access to computers and the Internet at home, as well as a low level of computer-related skills, put many already marginalized students at a further disadvantage.

Proportion of the population with various levels of computer skills, 2014—2018 (percentage)

For millions of children around the world, school is not only a place to learn. It is also a safe place, removed from violence, where they can receive free meals, and health and nutrition services such as vaccinations, deworming and iron supplementation. An estimated 379 million children missed out on school meals because of school closures during the pandemic. Without them, many children go hungry, which also threatens their immune systems and their capacity to cope with disease.

As studies from previous crises show, school closures and the economic downturn caused by COVID-19 may also increase rates of violence against children, child labour, child marriage and early pregnancies. Children from poor families often work to compensate for lost family income. Moreover, the reduced productivity of working parents poses economic challenges to both the family and society.

The cost of fighting COVID-19 and the reduction in tax revenue caused by the economic downturn are likely to have a negative effect on education spending by governments and on global aid to education.

Lack of basic infrastructure in schools, such as handwashing facilities, will make recovery from COVID-19 more difficult

One important step towards the goal of quality education for all is getting enough trained teachers into classrooms. According to the latest available data, 85 per cent of primary school teachers and 86 per cent of secondary school teachers worldwide received the minimum required training. Sub-Saharan Africa has the lowest percentage of trained teachers: 64 per cent at the primary level and 50 per cent at the secondary level.