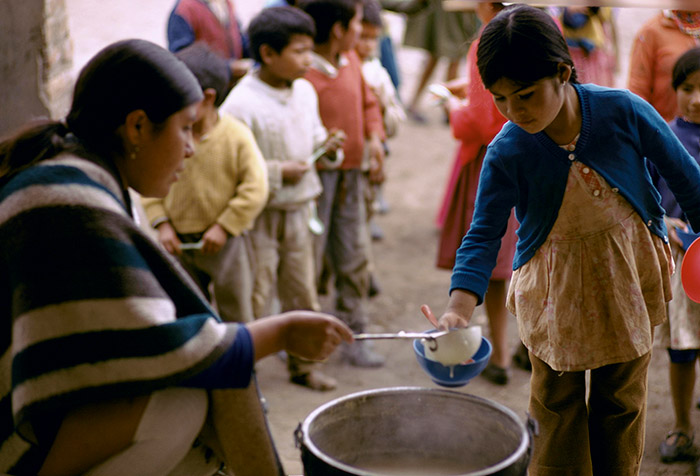 Eradicating hunger and achieving food security remains a challenge, more so in the wake of the COVID-19 crisis. At the global level, hunger and food insecurity have been on the rise, and malnutrition still affects millions of children. The situation is likely to get worse owing to economic slowdowns and disruptions caused by a pandemic-triggered recession. In addition to COVID-19, the desert locust upsurge in six Eastern African countries and Yemen – where 35 million people are already experiencing acute food insecurity – remains alarming. To mitigate the threats posed by the pandemic to vulnerable populations, countries need to take immediate action to keep trade flowing, to strengthen food supply chains and to increase agricultural production.

Since 2014, the global prevalence of undernourishment (chronic food insecurity) has remained virtually unchanged at slightly below 9 per cent. However, the total number of people going hungry has slowly increased for several consecutive years. Almost 690 million people were undernourished in 2019, up by nearly 60 million from 2014.

Eliminating hunger alone will not ensure that everyone has access to sufficient nutritious food. An estimated 25.9 per cent of the global population – 2 billion people – were affected by moderate or severe food insecurity in 2019, an increase from 22.4 per cent in 2014. People experiencing moderate food insecurity are typically unable to eat a healthy, balanced diet on a regular basis because of income or other resource constraints. Those facing severe food insecurity – around 750 million people – tend to run out of food and, at worst, go a day, or days, without eating. The recent increase in food insecurity was primarily due to worsening situations in sub-Saharan Africa and Latin America. The estimates for 2016–2019 also indicate that food insecurity was higher among adult women than men in every region.

Along with conflict, climate shocks and the locust crisis, COVID-19 poses an additional threat to food systems, indirectly reducing purchasing power and the capacity to produce and distribute food, which affects the most vulnerable populations. In 2020, up to 132 million more people may suffer from undernourishment because of COVID-19.

Prevalence of moderate or severe food insecurity, 2014 and 2019 averages (percentage)

Small-scale food producers, already disadvantaged, are being hit hard by the effects of the pandemic

Small-scale farmers play a critical role in food production worldwide, although they routinely face difficulties accessing land and other productive resources, along with information, financial services, markets and opportunities. Available data show that the share of small-scale producers among all food producers in Africa, Asia and Latin America ranges from 40 per cent to 85 per cent. However, their productivity is systematically lower, on average, than that of larger-scale producers, and in most countries their incomes are less than half of the incomes of their larger counterparts, as shown by data collected from selected countries.

The lockdown measures in place to prevent the spread of the coronavirus have caused businesses and local markets to close, and small-scale food producers are often not allowed to get their products to consumers.

Chronic undernutrition, or stunting, puts children at greater risk of dying from common infections; it is also associated with poor cognitive development. The proportion of children under 5 years of age suffering from stunting decreased from 32 per cent in 2000 to 23 per cent in 2015 and 21 per cent in 2019. However, 144 million children under age 5 were still affected by stunting in 2019. Three quarters of these children lived in just two regions: Southern Asia (39 per cent) and sub-Saharan Africa (36 per cent). More intensive efforts are needed to achieve the global target of bringing down the number of stunted children to 99 million by 2025 and to 82 million by 2030.

In 2019, 6.9 per cent (or 47 million) children under 5 were affected by wasting, or acute undernutrition, a condition caused by limited nutrient intake and infection. This is well above the 5 per cent global target for 2025, and the 3 per cent global target for 2030. More than half of the children suffering from wasting live in Central and Southern Asia, the only region with a prevalence of more than 10 per cent.

The growth and development of these children are at higher risk during the current crisis due to constrained access to nutritious diets and essential nutrition services.

Proportion of children under 5 years who are affected by stunting and wasting, 2019 (percentage)

* Excluding Australia and New Zealand.
** Excluding Japan.
*** Including estimates only for the United States of America. Confidence intervals are not available.
Note: Data coverage is low for Europe, therefore, it is not included in the chart.

The incidence of overweight in young children is on the rise increasing, a warning sign for future health problems

Childhood overweight is recognized as a global public health problem because of its pernicious influence on the incidence of acute and chronic diseases, healthy development and the economic productivity of individuals and societies. In 2019, 5.6 per cent (or 38 million) children under age 5 worldwide were overweight. The current global prevalence represents a medium level of severity, signalling that preventative actions are urgently needed for the youngest population.

Overweight and wasting often coexist in a population, and are considered the double burden of malnutrition. For example, in Northern Africa and South-Eastern Asia, the prevalence of wasting was 7.2 per cent and 8.2 per cent, respectively, in 2019, while overweight was 11.3 per cent and 7.5 per cent.

Proportion of children under 5 years who are overweight, 2019 (percentage)

* Excluding Australia and New Zealand. ** Excluding Japan.
Note: Data coverage is low for Europe, therefore, it is not included in the chart.

Investment in agriculture, relative to its contribution to the economy, continues to decline

Public investment in agriculture can enhance productivity, attract private investment and help reduce poverty and hunger. The share of government contribution to agriculture compared with the sector’s contribution to GDP – known as the agriculture orientation index – fell from 0.42 in 2001 to 0.31 in 2015 and 0.28 in 2018 worldwide. Meanwhile, the share of sector-allocable aid to agriculture from all donors fell from nearly 25 per cent in the mid-1980s to only 5 per cent in 2018, representing $12.8 billion. The fall in agricultural aid is due to a shift in donors’ focus to social-sector issues, such as improving governance, building social capital and helping fragile states.