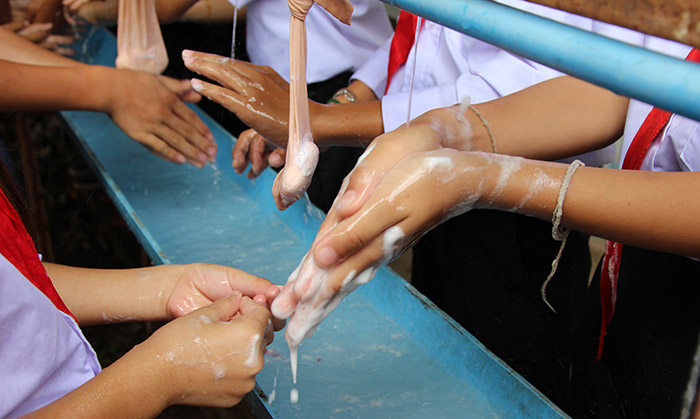 The coronavirus crisis has brought to the fore the critical importance of water, sanitation and hygiene for protecting human health. Despite progress, billions of people around the globe still lack these basic services. Immediate action to improve access to water, sanitation and hygiene services is required to prevent infection and contain the spread of COVID-19.
Water is essential not only to health, but also to poverty reduction, food security, peace and human rights, ecosystems and education. Nevertheless, countries face growing challenges linked to water scarcity, water pollution, degraded water-related ecosystems and cooperation over transboundary water basins. In addition, funding gaps and weak government systems hold many countries back from making needed advancements. Unless current rates of progress increase substantially, Goal 6 targets will not be met by 2030.

Closing the gaps in water, sanitation and hygiene are critical to containing the spread of COVID-19 and other diseases

Handwashing is one of the cheapest, easiest and most effective ways to prevent the spread of the coronavirus. But in 2017, only 60 per cent of people had a basic handwashing facility with soap and water at home. In LDCs, the share was 28 per cent. This means that, in 2017, an estimated 3 billion people worldwide lacked the ability to safely wash their hands at home. The regional disparities are stark: in sub-Saharan Africa, 75 per cent of the population (767 million people) lacked basic handwashing facilities, followed by Central and Southern Asia at 42 per cent (807 million people), and Northern Africa and Western Asia at 23 per cent (116 million people).

Water, sanitation and hygiene services are not always available in places where people seek medical care: in 2016, one in four health care facilities around the world lacked basic water supplies, one in five had no sanitation services, and two in five had no soap and water or alcohol-based hand rub, at points of care. Moreover, 47 per cent of schools worldwide lacked handwashing facilities with soap and water. Closing these gaps will be critical to providing effective health care and to containing the spread of COVID-19.

Proportion of population that has a handwashing facility with soap and water at home, 2017 (percentage)

Proportion of population with access to basic and safely managed water, sanitation and hygiene services, 2000-2017 and required growth (2017-2030) to meet the targets (percentage)

High water stress – the withdrawal of too much fresh water from natural sources compared with the fresh water available – can have devastating consequences for the environment and can constrain or reverse sustainable development. If unmitigated, water stress can lead to water scarcity, which could displace an estimated 700 million people by 2030. Globally, water stress remains at a safe 17 per cent; however, this overall value masks huge regional variations. Northern Africa and Central and Southern Asia register water stress levels above 70 per cent. Western Asia and Eastern Asia follow, with water stress levels between 45 per cent and 55 per cent, respectively.

Freshwater ecosystems provide natural sites for human settlements, bringing benefits such as transportation, natural purification, irrigation, flood protection and habitats for biodiversity. However, population growth, agricultural intensification, urbanization and industrial production degrade freshwater bodies worldwide, threatening ecosystems and the livelihoods of people everywhere. Globally, slightly more than 2.1 per cent of land is covered by freshwater bodies, but they are unevenly distributed. In developed countries, 3.5 per cent of land is covered by fresh water, compared with 1.4 per cent in developing countries. Least developed countries and small island developing States have a significantly lower coverage of freshwater bodies, at 1.2 per cent and 1 per cent, respectively, which increases their vulnerability to climate change and water scarcity.

Commitments of ODA to the water sector dropped by 9 per cent in 2018 from the previous year, compared with a 38 per cent increase from 2016 to 2017. Commitments to water and sanitation continued to increase, but at 3 per cent from 2017 to 2018, compared with 19 per cent the previous year. Data from 20 developing countries and territories showed funding gap of 61 per cent between identified needs to achieve national water, sanitation and hygiene targets and available funding. Increasing donor commitments to the water sector remains crucial in sustaining progress towards Goal 6.

On the brighter side, disbursements of ODA to the water sector increased by 6 per cent since 2017, reaching $9.4 billion in 2018, despite the overall decrease of 1.9 per cent in ODA disbursements across all sectors. Disbursements to the water and sanitation sector increased by 9 per cent, including an increase of $346 million to sub-Saharan Africa for large drinking water systems and water sector policy and administrative management.