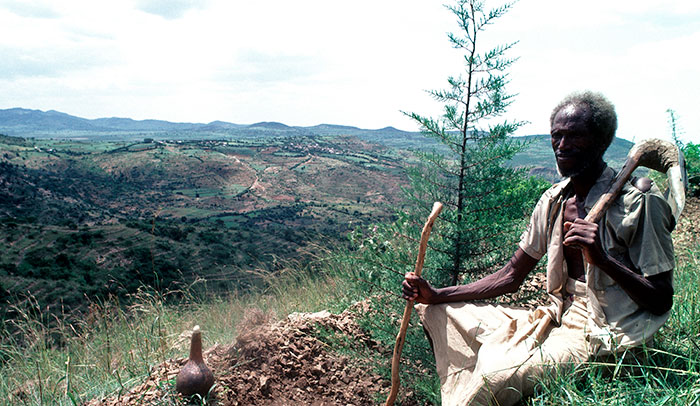 Human activity continues to erode the health of ecosystems on which all species depend. The loss of forests is slowing but continues at an alarming rate; one million plant and animal species are at risk of extinction according to a recent United Nations report, and an estimated 20 per cent of the Earth’s land area was degraded between 2000 and 2015. Many countries are taking measures to conserve, restore and make sustainable use of those invaluable natural resources. They are adopting legal mechanisms to ensure the fair sharing of benefits from genetic resources, protecting more KBAs, and implementing sustainable forest management plans. But those efforts must be scaled up—urgently. The severity of the situation requires immediate action and a fundamental transformation of our relationship with the Earth to halt biodiversity loss and protect ecosystems for the benefit of all.

The loss of global biodiversity is accelerating, moving us closer towards unknown and irreversible changes to the Earth’s ecosystems. According to the Red List Index, which tracks data on more than 20,000 species of mammals, birds, amphibians, corals and cycads, the risk of species extinction has worsened by about 10 per cent over the last 25 years. The Index declined from 0.82 in 1993 to 0.74 in 2018. Further, the latest report of the Intergovernmental Science- Policy Platform on Biodiversity and Ecosystem Services noted that biodiversity is declining faster than at any other time in human history.

The primary drivers of that assault are habitat loss from unsustainable agriculture, deforestation, unsustainable harvest and trade, climate change and alien invasive species. But even against such an ominous backdrop are numerous examples of species recovery following conservation interventions, including in small island developing States such as Fiji, Mauritius and the Seychelles. Accelerated action is needed to safeguard critically endangered species and mainstream extinction risk reduction across agriculture, industry, trade and other sectors.

Red List Index of species survival, 1993–2019, and projections for 2020–2030 (based on a business-as-usual extrapolation of the global indicator)

Twenty per cent of the Earth’s total land area was degraded between 2000 and 2015, resulting in a significant loss of services essential to human well-being. That estimate is relatively conservative given the underlying sub-indicators, which only represent three variables: changes in land cover, land productivity and organic carbon in soil. In all regions, except Europe and Northern America and Northern Africa and Western Asia, the extent of degradation covered 22.4 per cent to 35.5 per cent of land area, directly impacting the lives of over one billion people.

Global trends in land cover indicate a net loss in natural and semi-natural classes of land due largely to human-induced processes, including desertification, deforestation, improper soil management, cropland expansion and urbanization. Significant declines were also observed in the productivity of land cover classes that remained unchanged, with grasslands incurring some of the greatest losses.

Protecting sites that are important for terrestrial, freshwater and mountain biodiversity—KBAs—is vital to ensuring the long-term and sustainable use of natural resources. While progress has been made since 2000 in protecting KBAs, the rate of progress has slowed significantly since 2010.

Healthy mountain ecosystems are fundamental to the provision of ecosystem services to upland communities as well as lowland peoples living far from mountain peaks. For example, mountains are the source of 60 to 80 per cent of the world’s freshwater, which is used for domestic, agricultural and industrial consumption, green energy production and biodiversity conservation. Green coverage of mountain areas (by forests, grasslands/shrublands and croplands) is positively correlated to mountains’ state of health and, consequently, to their capacity to fulfil their ecosystem roles.

Forest area is still declining, but at a slower rate

Between 2000 and 2015, forest area as a share of total land area decreased from 31.1 to 30.7 per cent. That represents the loss of more than 58 million hectares of forests, an area roughly the size of Kenya. Most of that loss occurred in the tropics, with the most sizable declines found in Latin America and sub-Saharan Africa. Conversion of forest land for agricultural use, such as growing crops and raising livestock, is considered a key driver in forest loss.

The loss of forests in some tropical regions is partly balanced out by an increase in forested land in many parts of Asia, as well as in Europe and Northern America. In those regions, active afforestation and landscape restoration, as well as the natural expansion of forests on abandoned agricultural land, have led to the growth of forested land.

As a result, the net annual rate of forest loss in 2010 to 2015 was roughly 25 per cent slower than in 2000 to 2005. Moreover, the proportion of protected forest area and forests under long-term management plans remained stable or increased in all regions of the world.

Countries are making progress in adopting frameworks that incentivize the conservation and sustainable use of genetic resources and biodiversity through the sharing of benefits. Such resources include plants, animals, microbes and other genetic material and the traditional knowledge associated with them.

As of 1 February 2019, the Nagoya Protocol on Access to Genetic Resources and the Fair and Equitable Sharing of Benefits Arising from their Utilization had been ratified by 116 contracting Parties, including the European Union (an increase of 65 per cent from 2016). As of that date, 61 Parties had also adopted access and benefit-sharing (ABS) frameworks and published related information in the ABS Clearing-House (up from 6 in 2016). In addition, 145 Parties had ratified the International Treaty on Plant Genetic Resources for Food and Agriculture. As part of the treaty, over 64,000 standard material transfer agreements have been concluded for the transfer of more than 4.6 million samples of plant genetic resources for food and agriculture globally.