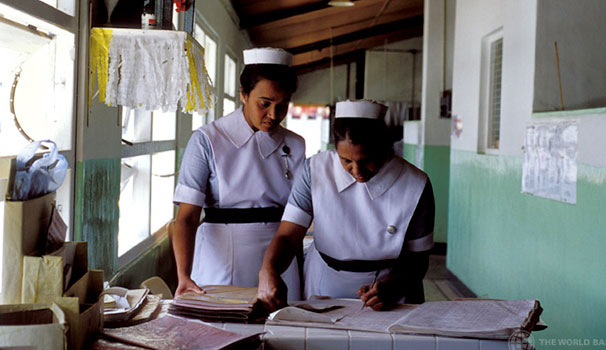 Major progress has been made in improving the health of millions of people. Maternal and child mortality rates have been reduced, life expectancy continues to increase globally, and the fight against some infectious diseases has made steady progress. In the case of other diseases, however, progress has slowed or stalled, including global efforts to eradicate malaria and tuberculosis. Far too many deaths occurred because trained health workers or routine interventions, such as immunizations, were not available. In fact, at least half the world’s population, many of whom suffer financial hardship, are still without access to essential health services. In rich and poor countries alike, a health emergency can push people into bankruptcy or poverty.

Concerted efforts are required on these and other fronts to achieve universal health coverage and sustainable financing for health; address the growing burden of non-communicable diseases, including mental health; and tackle antimicrobial resistance and environmental factors contributing to ill health, such as air pollution and the lack of safely managed water and sanitation.

Sustained investment in maternal health, especially in sub-Saharan Africa, is needed to meet the global target

Despite significant progress in maternal health, in 2017, nearly 300,000 women died from complications relating to pregnancy and childbirth. Over 90 per cent of them lived in low- and middle-income countries. For every woman who died, countless others suffered acute and even lifelong consequences of maternal ill health.

The majority of maternal deaths are preventable through appropriate management and care, including antenatal care by trained health providers, assistance during delivery by skilled health personnel, and care and support in the weeks after childbirth. However, progress has slowed in recent years. Continued investment and attention are needed to reach the global target of fewer than 70 maternal deaths per 100,000 live births by 2030, which could save more than one million lives over the course of a decade.

Ensuring that all births are assisted by skilled health professionals is not only critical to reducing maternal morbidity and mortality, but also to reducing stillbirths, morbidity and death among newborns. Based on the latest data from 2013 to 2018, 81 per cent of all births globally took place in the presence of skilled health personnel, a significant increase from 69 per cent from 2006 to 2012. In sub-Saharan Africa, where two thirds of the world’s maternal deaths occur, only 60 per cent of births were assisted by skilled attendants. Projections show that substantially more resources will be required just to maintain current coverage rates in Africa, due to population growth.


If the SDG target for under-5 mortality is met, the lives of an additional 10 million children will be saved by 2030

Under-5 and neonatal mortality declined in all regions, with the fastest progress in regions where levels were highest. Yet stark disparities persist across regions and countries. In 2017, 118 countries already had an under-5 mortality rate below the target of 25 deaths per 1,000 live births. However, progress will need to accelerate in about 50 countries, mostly in sub-Saharan Africa, to meet the target by 2030. If this is achieved, the lives of an additional 10 million children under 5 years of age will be saved. Many of these deaths could be prevented through interventions such as vaccinations, exclusive breastfeeding, proper nutrition, appropriate treatment of common childhood infections, as well as reductions in air pollution and access to safely managed drinking water and sanitation.

Despite broad immunization coverage, outbreaks of measles and diphtheria have resulted in many unnecessary deaths

Immunization is widely recognized as one of the world’s most successful and cost-effective health interventions, saving millions of lives. In 2017, 116.2 million children were immunized, the highest number ever reported. At the same time, pockets of low coverage have led to outbreaks of measles and diphtheria, resulting in many deaths—a clear demonstration of the importance of reaching full coverage.

The proportion of children who have received the required three doses of the diphtheria-tetanus-pertussis (DTP3)-containing vaccine increased from 72 per cent in 2000 to 85 per cent in 2015, but remained unchanged between 2015 and 2017. An estimated 19.9 million children did not receive the vaccine during the first year of life, putting them at serious risk of potentially fatal diseases.

Two doses of the measles-containing vaccine are required to prevent the disease and the illness, disability and death caused by associated complications. Coverage by the second dose (MCV2), given during the second year of a child’s life or upon school-entry age, increased from 15 per cent in 2000 to 59 per cent in 2015 and 67 per cent in 2017. This progress, while dramatic, is still insufficient to prevent measles outbreaks.

The pneumococcal conjugate vaccine (PCV) has the potential to significantly reduce deaths in children under 5 years of age. Globally, coverage by PCV has made steady advances since it was introduced, but has yet to reach 50 per cent. Many countries, including middle-income countries that have limited access to international financial support, are lagging behind because their current health budgets may not be sufficient to cover the costs without external support.

The decrease in HIV incidence is falling short of the target, despite steady progress in sub-Saharan Africa

Strong domestic and international commitment and funding for the AIDS response has fuelled an acceleration of evidenced-based programmes for prevention, testing and treatment. As a result, the incidence of HIV among adults (15 to 49 years of age) in sub-Saharan Africa declined by around 37 per cent from 2010 to 2017. This represents a drop from 3.39 infections per 1,000 uninfected people in 2010 to 2.14 in 2017. Progress has been slower elsewhere, and some subregions have even seen an increase in HIV incidence, including Western Asia (53 per cent), Central Asia (51 per cent) and Europe (22 per cent).

Global HIV incidence among adults declined by 22 per cent between 2010 and 2017, well short of the progress required to meet the 2020 and 2030 targets. The largest decline in incidence by age group was among children 0 to 14 years old (37 per cent from 2010 to 2017), reflecting increased provision of antiretroviral medications to prevent mother-to-child HIV transmission.

With progress against malaria at a standstill, increased efforts are urgently needed in the most affected countries

After more than a decade of steady gains against malaria, progress has stalled. No significant advances were made in reducing the number of malaria cases worldwide from 2015 to 2017. The incidence rate of malaria declined by 18 per cent between 2010 and 2015— from 72 cases per 1,000 people at risk to 59 —and then remained unchanged from 2015 to 2017.

In 2017, an estimated 219 million cases of malaria and 435,000 deaths from the disease were reported. Sub-Saharan Africa continues to carry the heaviest burden, accounting for more than 90 per cent of global malaria cases, and the toll is rising. From 2016 to 2017, approximately 3.5 million more malaria cases were reported in the 10 most affected African countries. Children under 5 years of age are the most vulnerable to the disease, and account for 61 per cent (266,000) of malaria deaths worldwide. Funding for malaria had been increasing since 2000, but recently stalled. Increased support directed to the most affected countries is urgently needed.

Gaps in detection and treatment of tuberculosis, along with drug-resistant strains, are pushing progress against the disease off course

Tuberculosis remains a leading cause of poor health and death worldwide. An estimated 10 million people fell ill with the disease in 2017. It was the top killer from a single infectious agent that year (above HIV) and the tenth leading cause of death overall. Nevertheless, significant progress has been made. The incidence of tuberculosis declined by 21 per cent since 2000—from 170 new and relapsed cases per 100,000 people that year to 140 in 2015 and 134 in 2017. The tuberculosis mortality rate among HIV-negative people fell by 42 per cent over the same period. However, large gaps in detection and treatment persist, and the current pace of progress is not fast enough to meet the target of ending the epidemic by 2030. Moreover, drug-resistant tuberculosis is a continuing threat. In 2017, there were 558,000 new cases with resistance to rifampicin, the most effective first-line drug, of which 460,000 had multidrug-resistant tuberculosis.

Neglected tropical diseases are slowly being vanquished, but remain a scourge in poorer countries

Neglected tropical diseases (NTDs) are a diverse group of communicable diseases found in 149 tropical and subtropical countries. They affect billions of people—particularly those who live in poverty, lack adequate sanitation, and are in close contact with infectious vectors and domestic animals—costing developing economies billions of dollars each year. In 2017, 1.58 billion people required mass or individual treatment and care for NTDs, down from 1.63 billion in 2015 and 2.03 billion in 2010. At least one NTD was eliminated in 34 countries in 2017. However, actual progress is likely even stronger, since improved surveillance is identifying more people requiring interventions against NTDs than in the past. In least developed countries, 52 per cent of the population (522 million) required treatment and care for NTDs in 2017, down from 78 per cent in 2010. To effectively control and eliminate NTDs, current measures must be intensified and expanded.

Inadequate water, sanitation and hygiene is linked to 60 per cent of the disease burden from diarrhoea, 100 per cent of the burden from infection through soil-transmitted helminths (parasitic worms), and 16 per cent of the burden owing to malnutrition (“burden” is understood as being the impact of a health problem as measured by financial cost, mortality, morbidity or other indicators). These three conditions led to a total of 870,000 deaths in 2016. This large disease burden could be significantly reduced if safely managed drinking water and sanitation services were universally available, and good hygiene practices were followed.

Both household and ambient air pollution increase the risk of cardiovascular and respiratory diseases, and are major risk factors for non-communicable diseases. Exposure to household air pollution, mainly due to polluting fuels and technologies for cooking, led to around 4 million deaths in 2016. Health risks from this type of pollution are particularly high among women and children, who typically spend the most time around the stove. Ambient air pollution from traffic, industry, power-generation, waste-burning and residential fuel combustion resulted in around 4.2 million deaths in 2016.

Strengthening primary health care and achieving health for all requires an adequate workforce that is motivated, supported and available where needed. Sadly, this is far from the reality. Available data from 2013 to 2018 indicate that close to 40 per cent of all countries have fewer than 10 medical doctors per 10,000 people, and around 58 per cent of countries have fewer than 40 nursing and midwifery personnel per 10,000 people. This is only a slight improvement from 2010 to 2015.

Evidence shows that health workers are unevenly distributed across the globe and even within countries. Not surprisingly, regions with the highest burden of disease have the lowest proportion of health workers to deliver services. All of the least developed countries have fewer than 10 medical doctors per 10,000 people, and 98 per cent have fewer than 40 nursing and midwifery personnel per 10,000 people. It is estimated that around 18 million additional health workers will be needed globally by 2030 to ensure healthy lives for all.

The proportion of countries with an insufficient number of health-care professionals, latest available data, 2013–2018 (percentage)

The International Health Regulations is a legally binding agreement that requires countries to report certain disease outbreaks and public health events to the World Health Organization (WHO). Since 2010, all 196 States Parties have sent reports to WHO on their capacity to implement the Regulations, and on their preparedness to deal with health emergencies more generally. In 2018, 190 States Parties submitted reports, compared to 167 in 2017.

An analysis of 182 reports shows that, globally, progress has been made in all 13 of the Regulations’ core capacities. Almost all States Parties are performing better in detection (e.g., surveillance and laboratory detection) than in emergency preparedness and response. Bigger gaps have been observed in capacity at points of entry (e.g., ports, airports and ground crossings) and in chemical safety and radiation emergencies. Although more work remains, these reports are clear evidence of international commitment and effort to improve early warning systems, and reduce and manage public health risks.

Score by capacities according to International Health Regulations reports, 2018