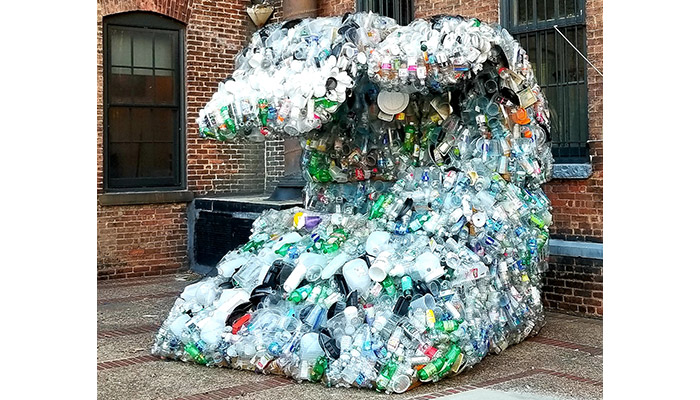 Economic and social progress over the last century has been accompanied by environmental degradation that is endangering the very systems on which our future development—indeed, our very survival—depends. Globally, we continue to use ever-increasing amounts of natural resources to support our economic activity. The efficiency with which such resources are used remains unchanged at the global level, thus we have not yet seen a decoupling of economic growth and natural resource use. Globally, the generation of waste is mounting. About one third of the food produced for human consumption each year is lost or wasted, most of it in developed countries. Urgent action is needed to ensure that current material needs do not lead to over-extraction of resources and further degradation of the environment. Policies must be embraced to improve resource efficiency, reduce waste and mainstream sustainability practices across all sectors of the economy.

Shrinking our material footprint is a global imperative

“Material footprint” refers to the total amount of raw materials extracted to meet final consumption demands. It is one indication of the pressures placed on the environment to support economic growth and to satisfy the material needs of people. The global material footprint rose from 43 billion metric tons in 1990 to 54 billion in 2000, and 92 billion in 2017—an increase of 70 per cent since 2000, and 113 per cent since 1990. The rate of natural resource extraction has accelerated since 2000. Without concerted political action, it is projected to grow to 190 billion metric tons by 2060. What’s more, the global material footprint is increasing at a faster rate than both population and economic output. In other words, at the global level, there has been no decoupling of material footprint growth from either population growth or GDP growth. It is imperative that we reverse that trend.

Domestic material consumption (DMC) measures the total amount of materials directly used by an economy to meet the demands for goods and services from within and outside a country. At the global level, DMC is equivalent to the material footprint, and reached 92 billion metric tons in 2017. DMC increased from 2010 to 2017 in all regions of the world. Particularly striking is the increase in Eastern and South-Eastern Asia, where about 10 billion more metric tons were used in 2017 than in 2010. That increase accounts for about two thirds of the increase at the global level.

The rising share of Eastern and South-Eastern Asia and other emerging economies in global DMC is due to two dynamics. The first is the construction of new infrastructure in emerging and transitioning economies, a pattern that many developing countries are likely to follow in the future. The second is the outsourcing of the material- and energy-intensive stages of production from high-income nations to less resource-efficient countries. The shift in production from the former to the latter means that more natural resources are needed to produce the same output.

Because that shift in economic activity happened faster than improvements in resource efficiency in individual countries, material intensity—defined as domestic material consumption per GDP—stagnated at an average of 1.16 kilograms per dollar from 2010 to 2017. In 2017, developed countries used about one fifth as many natural resources as developing countries to produce the same amount of economic output. Between 2010 and 2017, material intensity decreased in many regions, showing some progress towards the relative decoupling of economic output and DMC. But material intensity increased in other regions, resulting in no change at the global level. Good progress has been made in sub-Saharan Africa, Central and Southern Asia and Oceania (excluding Australia and New Zealand), mostly as a result of increases in GDP.

Domestic material consumption per unit of GDP, 2010 and 2017 (kilogram per dollar)

The transition towards sustainable and resilient societies will ultimately depend on the responsible management of the planet’s finite natural resources. Well-designed national policy frameworks and instruments are necessary to enable the fundamental shift towards sustainable consumption and production patterns. In 2018, 71 countries and the European Union reported on a total of 303 such policies and instruments.

A pilot study of 262 reported policies and instruments showed that, while the potential economic benefits of sustainable consumption and production processes are well recognized, social benefits are still largely overlooked. That is, social benefits are rarely included in policy objectives or measured. For instance, 63 per cent of the reported policies and instruments examined their impact on air, soil and water pollution, 45 per cent on waste reduction and 43 per cent on greenhouse gas emissions. Only 11 per cent considered their impact on health, and 7 per cent looked at their impact on gender. Demonstrating the benefits of such policies to all the SDGs will be essential to understanding the overall contribution of sustainable consumption and production to sustainable development, and to building the coalition needed to support a transformative shift.