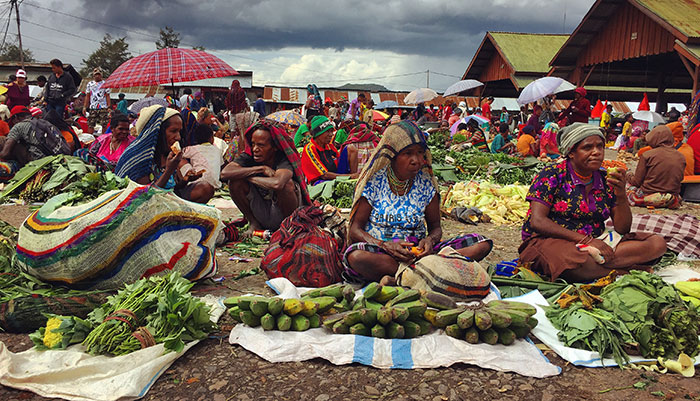 The decline of extreme poverty continues, but the pace has slowed, and the world is not on track to achieving the target of ending poverty by 2030. Extreme poverty today is concentrated and overwhelmingly affects rural populations. Increasingly, it is exacerbated by violent conflicts and climate change. Tackling the remaining pockets of extreme poverty will be challenging due to their persistence and complexity—often involving the interplay of social, political and economic factors. Effective social protection schemes and policies, along with government spending on key services, can help those left behind get back on their feet and find a way out of poverty.

Progress against poverty continues but has slowed, jeopardizing achievement of the Goal

Extreme poverty remains stubbornly high in low-income countries and countries affected by conflict and political upheaval, particularly in sub-Saharan Africa. Among the 736 million people who lived on less than $1.90 a day in 2015, 413 million were in sub-Saharan Africa. This figure has been climbing in recent years and is higher than the number of poor people in the rest of the world combined.

Forecasts suggest that without significant shifts in policy, extreme poverty will still be in the double digits in sub-Saharan Africa by 2030. About 79 per cent of the world’s poor live in rural areas. The poverty rate in rural areas is 17.2 per cent—more than three times higher than in urban areas (5.3 per cent). Close to half (46 per cent) of extremely poor people are children under 14 years of age.

More than one third of employed workers in sub-Saharan Africa still live on less than $1.90 a day

Having a job does not guarantee a decent living. In fact, 8 per cent of employed workers and their families worldwide lived in extreme poverty in 2018, despite a rapid decline in the working poverty rate over the past 25 years. Substandard working conditions are the main issue, underscoring the central role that decent and productive employment plays in helping people escape poverty.

Progress in reducing working poverty has slowed over the past five years, suggesting that efforts in this area need to be reinvigorated. The situation remains particularly alarming in sub-Saharan Africa, where the share of working poor stood at 38 per cent in 2018. In least developed and landlocked developing countries, at least one quarter of workers live in extreme poverty despite having a job. Employed young people (between 15 and 24 years of age) are more likely to be living in poverty, with a working poverty rate that is double that of adult workers.

Social protection programmes reduce the brunt of poverty and can also prevent people from falling into poverty in the first place. By helping to prevent and ease poverty and inequality at every stage of people’s lives, such programmes make societies more inclusive and stable. However, only 45 per cent of the world’s population are effectively covered by at least one social protection cash benefit. The remaining 55 per cent—as many as 4 billion people—have been left behind.

The extent of coverage depends on the type of protection system and the region. Globally, 68 per cent of people above retirement age receive a pension, but the benefits in many countries are often not enough to lift older people out of poverty. Data also show a global deficit of social protection for other groups: only 22 per cent of the unemployed receive unemployment benefit payments, 28 per cent of persons with severe disabilities receive disability cash benefits, one third of children are effectively covered by social protection, and only 41 per cent of women giving birth receive maternity cash benefits. Furthermore, coverage of social assistance cash benefits is as low as 25 per cent for vulnerable groups—children, people of working age and older persons not protected by contributory schemes.

The differences among regions are stark: 92 per cent of children are covered by social protection systems in Europe and Northern America, 56 per cent in Latin America and the Caribbean, but only 13 per cent in sub-Saharan Africa, and 14 per cent in Eastern and South-Eastern Asia.

Poverty affects children disproportionately. One out of five children live in extreme poverty, and the negative effects of poverty and deprivation in the early years have ramifications that can last a lifetime. Ensuring social protection for all children and other vulnerable groups is critical for achieving the Sustainable Development Goals (SDGs), particularly in regions with large coverage gaps between children and other segments of the population.


The toll of climate-related disasters is rising, with poorer countries most affected

No matter the measure—whether loss of life or economic loss— disasters cause enormous suffering the world over. From 1998 to 2017, direct economic losses from disasters were estimated at almost $3 trillion, of which climate-related disasters accounted for 77 per cent of the total (a rise of 151 per cent from 1978 to 1997). Over that period, climate-related and geophysical disasters claimed an estimated 1.3 million lives. More than 90 per cent of all disasters were caused by floods, storms, droughts, heatwaves or other extreme weather events.

Poverty is a major underlying driver of disaster risk, so it comes as no surprise that the poorest countries are experiencing a disproportionate share of damage and loss of life attributed to disasters. More than 90 per cent of internationally reported deaths due to disaster occur in low- and middle-income countries. Disasters kill 130 people for every one million people in low-income countries compared to 18 per one million in high-income countries. Economic losses resulting from disasters are also much higher in poorer countries, when measured as a percentage of their gross domestic product (GDP). Among the 10 worst disasters in terms of economic damage (when expressed relative to GDP), 8 occurred in low- or middle-income countries.