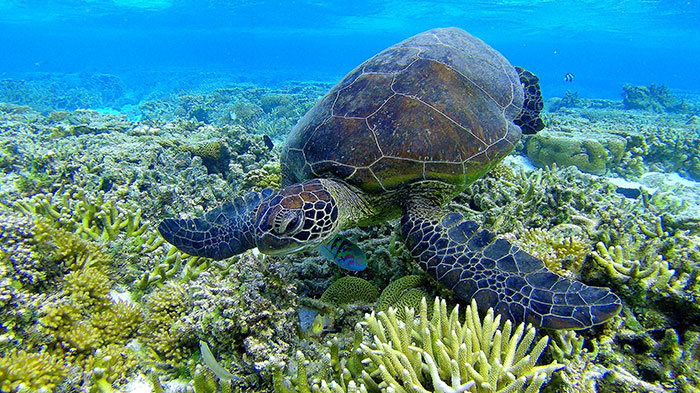 Life depends on oceans. They make up the planet’s largest ecosystem— covering more than two thirds of the Earth’s surface— and provide billions of people with food and livelihoods. Oceans produce about half the oxygen we breathe, and act as a climate regulator, absorbing atmospheric heat and more than one quarter of man-made CO2. However, decades of increasing carbon emissions have led to a build-up of heat in the oceans and changes in their chemical composition. The resulting adverse effects of ocean acidification, climate change (including sea-level rise), extreme weather events and coastal erosion exacerbate ongoing threats to marine and coastal resources from overfishing, pollution and habitat degradation. Protected areas and policies and treaties that encourage responsible extraction of ocean resources are critical to confronting these threats.

Coastal areas worldwide are affected by land-based pollutants, including sewage and nutrient runoff, leading to coastal eutrophication, degraded water quality and the impairment of coastal marine ecosystems. Analysis of the clean water indicator, a measurement of the degree of ocean pollution, shows that water quality challenges are widespread, but are most acute in some equatorial zones, especially in parts of Asia, Africa and Central America.

Nearly all countries have room to improve their coastal water quality. Analysis of trends from 2012 to 2018 shows that positive change is indeed possible: 104 of 220 coastal regions improved their coastal water quality over that period. Such improvements require policy commitments at the country level to expand access to wastewater treatment and to reduce chemical and nutrient runoff from agricultural sources, along with global commitments to reduce plastic debris.

Clean water scores for 220 coastal regions, assessed on a scale of 0 (very polluted) to 100 (clean)

The uptake of atmospheric CO2 by the ocean changes the chemical composition of seawater, altering its carbonate chemistry and resulting in a decrease of pH (and growing ocean acidification). Observations of ocean pH over the past 30 years have shown a decrease in surface pH of 0.1 units. This is equivalent to a 26 per cent increase in acidity from pre-industrial times. At the current rate of CO2 emissions, an increase in acidity of 100 to 150 per cent by the end of this century is predicted.

Ocean acidification threatens organisms as well as ecosystem services, including food security, by endangering fisheries and aquaculture. It also impacts coastal protection (by weakening coral reefs, which shield the coastline), transportation and tourism. As the acidity of the ocean rises, its capacity to absorb CO2 from the atmosphere decreases, hampering the ocean’s role in moderating climate change.

Atmospheric and seawater CO2 concentrations, and seawater pH in the North Pacific, 1958–2017 (parts per million (ppm), micro-atmospheres [μatm] and pH)

The extent of marine protected areas has doubled since 2010, but more must be done to safeguard key biodiversity areas

Despite that progress, the rate at which KBAs are being protected has slowed and, if current trends continue, will flatten by 2030. Developing countries, in particular LDCs and small island developing States, are lagging behind. A redoubling of efforts is needed to establish new marine protected areas and to strengthen the management of existing ones.

Mean percentage area of each important site (KBA) for marine biodiversity that is covered by protected areas, 2000, 2010 and 2018 (percentage)

The decline in fish stocks appears to have stabilized; now they need to be rebuilt, especially in severely depleted regions

To preserve the health and productivity of fisheries, fish stocks must be maintained within biologically sustainable levels. Overfishing not only reduces food production, but also impairs the functioning of ecosystems and reduces biodiversity, with negative repercussions for the economy and society. Worldwide, the proportion of marine fish stocks that are within biologically sustainable levels declined from 90 per cent in 1974 to 67 per cent in 2015. However, this decreasing trend appears to have stabilized since 2008—an encouraging sign.

In 2015, the Mediterranean and Black Sea region had the lowest percentage of sustainable fish stocks (37.8 per cent), followed closely by the Southeast Pacific region (38.5 per cent). In contrast, the Eastern Central Pacific and Northeast Pacific regions had the highest proportion of fish stocks at biologically sustainable levels (above 85 per cent). More focused efforts are needed to rebuild overfished stocks, particularly in severely depleted regions.

Illegal, unreported and unregulated (IUU) fishing remains one of the greatest threats to marine ecosystems. Ruthless poaching in fisheries often leads to their collapse, threatening livelihoods and exacerbating poverty and food insecurity. Small-scale fisheries in developing countries are particularly vulnerable. Countries have developed a range of international instruments to combat illegal fishing within a global framework to address fisheries management. The first international binding agreement developed expressly to combat IUU fishing, the Agreement on Port State Measures, entered into force in June 2016. As of March 2019, 59 States and one member organization—the European Union representing its 28 member States— were Parties to it. Worldwide implementation of the Agreement, supported by effective monitoring, control and surveillance, and supplemented by market access and trade measures, will boost international efforts to curb IUU fishing.

Most countries have frameworks to address the needs of small-scale fisheries; the next critical stage is their implementation

Almost all countries have small-scale fisheries, and they account for more than half of total production in developing countries, both in terms of quantity and value. Approximately 120 million workers worldwide—97 per cent of whom live in developing countries— depend directly on the value chains of commercial capture fisheries for their livelihoods. Women constitute nearly half of that workforce. Despite their critical contributions to nutrition, food security and local livelihoods, many small-scale fishing communities continue to be marginalized.

To help fisherfolk access productive resources, services and markets, most countries have developed targeted regulatory and institutional frameworks. Many countries have implemented those frameworks to a high degree, but more than one fifth of countries, particularly in Oceania and Central and Southern Asia, report a low to medium level of implementation.

To help fisherfolk access productive resources, services and markets, most countries have developed targeted regulatory and institutional frameworks. Many countries have implemented these to a high degree, but more than one fifth of countries, particularly in Oceania and Central and Southern Asia, report a low to medium level of implementation.