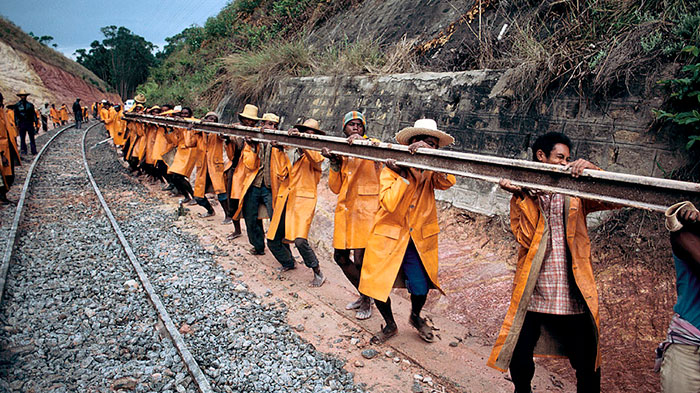 Inclusive and sustainable industrialization, together with innovation and infrastructure, can unleash dynamic and competitive economic forces that generate employment and income. They play a key role in introducing and promoting new technologies, facilitating international trade and enabling the efficient use of resources. However, the world still has a long way to go to fully tap this potential. LDCs, in particular, need to accelerate the development of their manufacturing sector if they are to meet the 2030 target, and scale up investment in scientific research and innovation. On a positive note, the carbon intensity of manufacturing industries declined at an annual rate of almost 3 per cent from 2010 and 2016, showing a general decoupling of CO2 emissions and GDP growth. Total official flows for economic infrastructure in developing countries reached $59 billion in 2017, an increase of 32.5 per cent in real terms since 2010. Further, impressive gains have been made in mobile connectivity.

Despite recent progress, industrialization in least developed countries is still too slow to meet the 2030 target

The growth of manufacturing in both developing and developed regions slowed in 2018, attributed largely to emerging trade and tariff barriers that constrain investment and future expansion. Despite the slowdown, the global share of manufacturing value added (MVA) in GDP increased marginally—from 15.9 per cent in 2008 to 16.5 per cent in 2018, when it began to plateau. In LDCs, the share of manufacturing in total GDP increased 2.5 per cent annually between 2015 and 2018. However, that still falls short of the pace needed to achieve a doubling of the MVA share in GDP by 2030, and calls for accelerated action. The disparities in industrial productivity between rich and poor nations remain stark. For instance, MVA per capita was only $114 in LDCs compared to $4,938 in Europe and Northern America, in 2018.

Proportion of small-scale manufacturing enterprises with a loan or line of credit, most recent value, 2009–2018 (percentage) 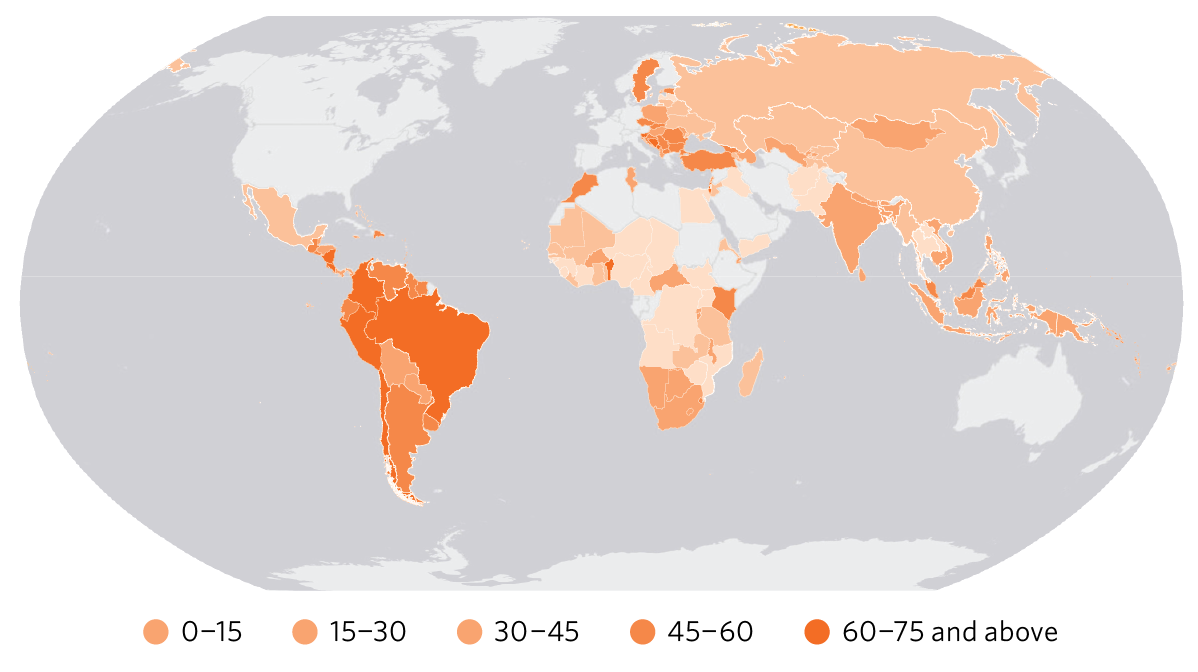 Higher-tech manufacturing is growing worldwide, except in sub-Saharan Africa

Recent years have seen a steady shift away from resource-based, low-tech manufacturing activities towards those that are medium-high- to high-tech. Those higher-tech manufacturing sectors are often reliant on the latest technologies and produce a wide array of consumer goods, from computers, televisions and other communications devices to appliances and other household equipment. The demand for such products tends to increase as income levels rise.

The share of medium-high- and high-tech industries in total MVA increased from 40.5 per cent in 2000 to 44.7 per cent in 2016, with large differences across regions. In Eastern and South-Eastern Asia and in Europe and Northern America, for example, over 47 per cent of total MVA came from higher-tech sectors in 2016. In contrast, the shares in Oceania (excluding Australia and New Zealand) and sub-Saharan Africa were only 1.9 per cent and 14.9 per cent, respectively. In sub-Saharan Africa, the proportion of medium-high- and high-tech MVA in total MVA actually fell between 2000 and 2016, but rose in all other regions.

Proportion of medium-high and high-tech MVA in total MVA, 2000 and 2016 (percentage)

Global spending on research and development has reached $2 trillion a year, with wide disparities among countries

The proportion of global GDP invested in research and development (R&D) increased from 1.52 per cent in 2000 to 1.68 per cent in 2016. In absolute terms, global R&D investment reached $2 trillion (purchasing power parity) in 2016, up from $739 billion in 2000. That represents an average annual growth rate of 4.3 per cent when adjusted for inflation. Wide disparities are found among regions. In Europe and Northern America, 2.21 per cent of GDP was spent on R&D in 2016, compared to 0.42 per cent and 0.83 per cent, respectively, in sub-Saharan Africa and Western Asia. Such disparities indicate the continued need for strong policy support for increased financing for R&D in developing regions.

Gross domestic expenditure on R&D as a proportion of GDP, 2016 or latest available year (percentage) 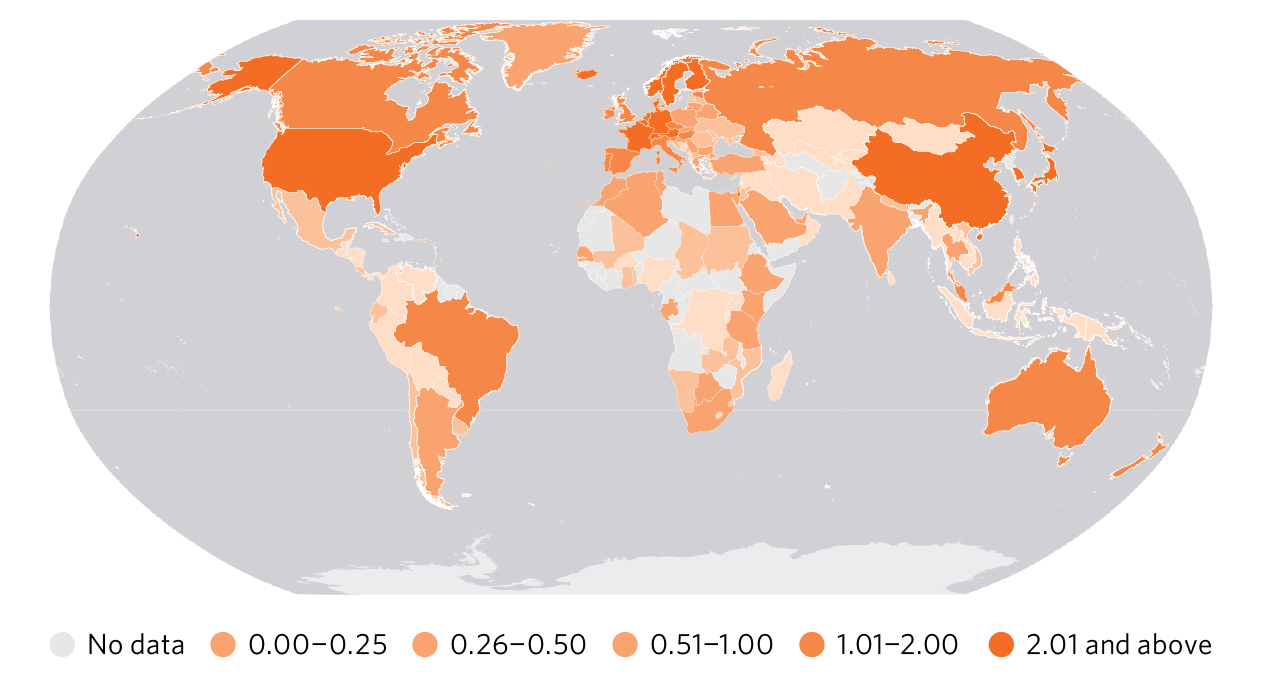 Almost everyone now lives within range of mobile-cellular networks, but not all can afford to use them

Fixed-broadband Internet connections remain out of reach for many people. But coverage of mobile-cellular signals and mobile-broadband Internet has expanded rapidly, now reaching almost the entire global population. In 2018, 96 per cent of the world’s population lived within reach of a mobile-cellular signal, and 90 per cent of people could access the Internet through a third generation (3G) or higher-quality network. However, while most live within range of these signals, not all are able to take advantage of them. The cost of accessing mobile-cellular networks and mobile-broadband Internet remains too high for many, particularly the most disadvantaged and at-risk population groups. In fact, just over half of the world’s population is currently using the Internet, with rates much lower in LDCs (about 20 per cent).

Number of people covered by a mobile network, by technology, 2007¬2018 (billions)


† Estimate
Note: LTE (Long-Term Evolution) is a standard for high-speed wireless communication that allows for faster speeds than 3G technologies but does not meet the technical criteria of a 4G wireless service.