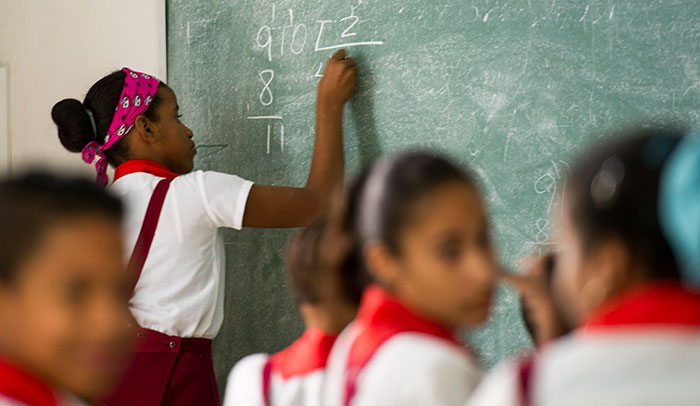 Education enables upward socioeconomic mobility and is a key to escaping poverty. Nevertheless, millions of children are still out of school, and not all who do attend are learning. More than half of all children and adolescents worldwide are not meeting minimum proficiency standards in reading and mathematics. Disparities in educational opportunities and outcomes are found across regions, and sub-Saharan Africa and parts of Central and Southern Asia lag behind. As a result, many students are not fully prepared to participate in a highly complex global economy. That gap should provide the incentive for policymakers to refocus their efforts to ensure that the quality of education is improved, and that more people of all ages can access it.

Girls are more likely than boys to learn how to read. Globally, for every 100 boys who achieved minimum proficiency in reading in 2015, 105 girls of primary school age and 109 adolescent women of lower secondary school age met at least the minimum standard.

The learning crisis not only threatens an individual’s ability to climb out of poverty, it also jeopardizes the economic future of entire nations as they struggle to compete in a global marketplace with less-than-skilled human resources. The next decade provides an important window of opportunity for policymakers to ensure that all children are proficient in basic literacy and numeracy.

Percentage of children and adolescents not achieving minimum proficiency in reading and mathematics, 2015 (percentage)


Early childhood education offers a head start in school, but one third of the world’s children are being left behind

Participation rate in organized learning one year before the official entry age for primary school, 2017 (percentage)

Girls still face barriers to education in most regions, particularly in Central Asia, Northern Africa and Western Asia, and sub-Saharan Africa. In those regions, girls of every age are more likely to be excluded from education than boys. For every 100 boys of primary-school age out of school in 2017, 127 girls were denied the right to education in Central Asia, 121 in sub-Saharan Africa, and 112 in Northern Africa and Western Asia. At the global level, 118 girls were out of school for every 100 boys. Recent successes in reducing the number of children out of school and reducing the gender gap in the out-of-school rate need to be replicated worldwide to ensure all children, everywhere, are attending school.

Number of school-age children out of school worldwide, by level of education and sex, 2000–2017 (million)

Too many schools in sub-Saharan Africa lack the basic elements of a good quality education: trained teachers and adequate facilities

Adequate infrastructure and teacher training play a critical role in the quality of education. Of all regions, sub-Saharan Africa faces the biggest challenges in providing schools with basic resources. The situation is extreme at the primary and lower secondary levels, where less than one half of schools in sub-Saharan Africa have access to drinking water, electricity, computers and the Internet. At the upper secondary level, 57 per cent of schools have electricity, but only 25 to 50 per cent have access to drinking water, handwashing facilities, computers and the Internet.

Another important step towards the goal of good quality education for all is getting enough trained teachers into classrooms. Here again, sub-Saharan Africa lags behind. In 2017, that region had the lowest percentages of trained teachers in pre-primary (48 per cent), primary (64 per cent) and secondary (50 per cent) education.

Proportion of schools with access to basic school resources globally and in sub-Saharan Africa, upper-secondary, 2017 (percentage)

Despite progress, 750 million adults still cannot read and write a simple statement; two thirds of those adults are women

Recent decades have seen improvements in basic reading and writing skills and a steady reduction in gender gaps, with women’s literacy rates growing faster than men’s literacy rates in all regions over the past 25 years. However, 750 million adults—two thirds of whom are women—remained illiterate in 2016. Adult literacy rates are lowest in sub-Saharan Africa and Southern Asia. Southern Asia alone is home to nearly half (49 per cent) of the global population who are illiterate.

On a more positive note, youth literacy rates are generally higher than those of adults. This reflects increased access to schooling among younger generations, although many students with basic reading and writing skills still struggle to meet the higher standard of minimum proficiency in reading and mathematics. The global literacy rate for adults (15 years of age and older) was 86 per cent in 2016, compared to 91 per cent for youth (15 to 24 years old). However, youth literacy remains low in several countries, most of them in sub-Saharan Africa.

Proportion of global population who are illiterate, 15 years and older, 2016 (percentage)