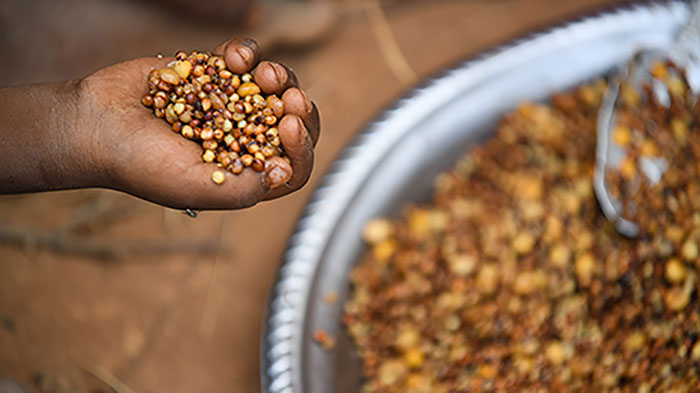 Despite earlier extended progress, the number of people suffering from hunger has been on the rise since 2014. Stunting affects the growth and cognitive development of millions of children, while the prevalence of overweight—the other face of malnutrition— is increasing in all age groups. In the wake of conflicts, climate-induced shocks and economic slowdowns worldwide, intensified efforts are needed to implement and scale up interventions to improve access to safe, nutritious and sufficient food for all. Specifically, attention needs to be given to increasing the agricultural productivity and incomes of small-scale food producers, implementing resilient agricultural practices, and ensuring the proper functioning of markets. Finally, in ensuring that no one is left behind on the road towards zero hunger, the intergenerational cycle of malnutrition must be broken.

After extended progress, the number of people suffering from hunger is on the rise

The number of people going hungry has increased since 2014—a worrisome trend. An estimated 821 million people were undernourished in 2017, the same number as in 2010. The prevalence of undernourishment has remained virtually unchanged in the past three years at a level slightly below 11 per cent. Updated figures on undernourishment, food insecurity and malnutrition will be released in The State of Food Security and Nutrition in the World 2019 (July 2019).

The situation deteriorated significantly in sub-Saharan Africa, where the number of undernourished people increased from 195 million in 2014 to 237 million in 2017. Sub-Saharan Africa remains the region with the highest prevalence of hunger, with the rate increasing from 20.7 per cent in 2014 to 23.2 per cent in 2017. In South America, the situation also appears to be worsening. This may be the result of an economic slowdown, which reduced fiscal capacity to protect the most vulnerable against rising domestic prices and loss of income. Adverse weather conditions affecting food availability and prices, and prolonged armed conflicts, are among the key drivers of these trends.

Number and proportion of undernourished people in the world, 2005–2017 (millions and percentage)

Stunting and wasting in children are declining, but not fast enough to meet SDG targets

Chronic undernutrition or stunting—defined as inadequate height for age—puts children at an increased risk of dying from common infections. Stunting is also associated with poor cognitive development, which can have a negative impact on a country’s long-term progress. Since 2000, the proportion of stunted children has been declining; however, 149 million children under 5 years of age—22 per cent of the global under-5 population—were still chronically undernourished in 2018. Three quarters of those children live in Southern Asia (39 per cent) and sub-Saharan Africa (36 per cent). More intensive efforts are needed to meet the target of bringing the number of stunted children down to 100 million by 2025 and 83 million by 2030.

In 2018, 49 million children under 5 years of age—7.3 per cent of the global under-5 population—suffered from acute undernutrition, or wasting (low weight for height), a condition generally caused by limited nutrient intake and infection. Over half of children with wasting live in Southern Asia. The global wasting rate in 2018 remained well above the 5 per cent global target for 2025 and the 3 per cent target for 2030.

Proportion of children under 5 years who are stunted, 2000 and 2018 (percentage)

The prevalence of overweight, another form of malnutrition, is increasing in all age groups

Childhood overweight and wasting form the double burden of malnutrition. Children who are overweight or obese are at higher risk of early-onset obesity-related health and psychological complications. They often carry the extra weight into adolescence and adulthood, leading to lifelong health problems. The prevalence of overweight is increasing in all age groups. In 2018, childhood overweight affected 40 million children under 5 years of age—5.9 per cent of the global under-5 population. Prevalence levels were above 9 per cent in Northern Africa, Southern Africa, Central Asia, Oceania (excluding Australia and New Zealand) and Western Asia.

Globally, in 2016, overweight affected 20.6 per cent of children 5 to 9 years old (131 million), 17.3 per cent of adolescents (207 million) and 38.9 per cent of adults (2 billion). The promotion of healthy diets is central to halting and reversing the obesity epidemic. Governments have a range of policy options to choose from to improve access to healthy and affordable diets, from “hard” policies, such as bans and regulations, to “soft” policies, that entail lower degrees of intervention in people’s lives, such as the provision of information.

Proportion of children under 5 years who are overweight, 2018 (percentage)

Empowering small-scale food producers to participate fully in development is critical to improving food security and reducing poverty and hunger. Many small-scale and family farmers are poor; have limited capacities and resources; face regular food insecurity; and have limited access to markets and services. Both the income and productivity of small-scale food producers are systematically lower than those of their larger counterparts. The share of small-scale producers among all food producers in countries with data in Africa, Asia and Latin America ranges from 40 per cent to 85 per cent, compared to less than 10 per cent in Europe. To strengthen the resilience and adaptive capacity of small-scale producers, it is important to help them improve their agricultural productivity. Equally important is enabling them to manage their natural resources sustainably; adapt to climate change; and overcome barriers in accessing markets, financial services, information and knowledge.

Weather-induced shocks, civil insecurity and declining food production have all contributed to high food prices in at least two dozen countries worldwide. In 2018 and the first months of 2019, production shortfalls, currency depreciations and insecurity triggered high food prices in several countries in Africa. In Central America, the price of maize climbed steeply in mid-2018, mainly over concerns about the impact of severe dry weather on the main season’s crops. The same occurred in some countries in East and Southern Africa in the first months of 2019. Economic turmoil also drove up food prices in some countries, while low public inventories and increased fuel costs led to record high prices in others.

Investment in the agriculture sector is critical for reducing hunger and poverty, improving food security, creating employment and building resilience to disasters and shocks. However, government spending on agriculture in relation to its contribution to the economy fell between 2001 and 2017. At the global level, the agriculture orientation index (AOI)—the share of government expenditure to agriculture divided by the share of GDP from agriculture—fell from 0.42 in 2001 to 0.26 in 2017. From 2015 to 2017, the average AOI was highest in Northern Africa and Western Asia (0.42) and lowest in sub-Saharan Africa (0.20). Aid to agriculture is only a fraction of what it was in the 1980s. The share of sector-allocable aid to agriculture from member countries of the Development Assistance Committee of the Organization for Economic Cooperation and Development fell from nearly 25 per cent in the mid-1980s to only 7 per cent in 2017—a total of $12.6 billion.